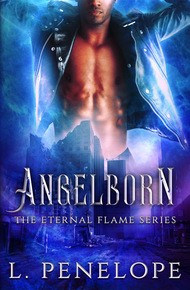 L. Penelope has been writing since she could hold a pen and loves getting lost in the worlds in her head. She is the author of fantasy and paranormal romance with characters who match the real world. Her debut novel, Song of Blood & Stone, won the 2016 Self-Publishing eBook Award from the Black Caucus of the American Library Association. The fantasy series was picked up by St. Martin's Press for publication starting 2018.

After living on both coasts, she settled in Maryland with her husband and their furry dependents. Sign up for new release information and giveaways on her website: http://www.lpenelope.com.

He gave up eternity for love… and lost. Will she be his second chance?

Maia sees dead people. Since she can't distinguish them from the living, she ignores everyone in order to appear sane. But the ghost haunting her roommate breaks through her hardened shell. Not only does he claim not to be dead, he makes her feel things she never has before—dangerous feelings for a man who can never be hers.

For an angelborn like Caleb, dying without a soul sentenced him to eternity in the Wasteland. Now he's escaped, but the only way to stay free is by convincing his true love to share her soul with him. You only get one soulmate and his is not the broken, scarred young woman he can't stay away from. With dangerous angels hunting him, Maia is a distraction he can't afford.

After inadvertently leading a threat to Caleb's door, Maia is willing to risk anything to keep him safe. Even if that means losing him forever.

L. Penelope's books have been described as 'engrossing', her characterizations are mesmerizing, and she writes fantasy narratives that make you want to leap through the page. Which is why I am elated to have Angelborn among these stories. – Terah Edun

A groan escapes my throat as I enter my dorm room. He is here again. The strange one with the haunted eyes. There's just no way to win, is there?

My first year at Douglass University, my social worker, Rosie, pulled some strings and got me into the newest dorm, a building new enough that no one had died in it yet. And I had a single. For all of freshman year, my home was my sanctuary, but this year is different. I have a roommate, Genna. And she's got a dead guy haunting her.

If he were alive, most girls would call him hot. Light brown eyes, café au lait skin, close-cropped hair. He probably could have modeled in life. He looks about our age, but there's no way to tell how old he was when he died. The dead appear the way they remember themselves—it's not always how they looked at the end.

But this one is weird. He's kind of a failed hipster, all wannabe thrift-store chic in weird jeans and goofy T-shirts, but it totally doesn't work for him. And he floats, usually near the ceiling. That's pretty rare. I've seen a couple others who did stuff like that, but they're most often the really angry ones, like Natasha. The murder victims who are about to lose control. This guy seems calm. Harmless, even. He might actually be friendly, but I'm not planning on finding out. And he's completely obsessed with Genna. He hovers there, staring at her for hours. He's been here every day for the past week, since right after we moved in.

Rosie told me she'd checked Genna out. Both of her parents and all four of her grandparents are still alive, and she didn't seem to have any crazy exes in her past, certainly none who had died violently. No stalker types. She's lived a charmed life so far. She's a pretty girl, in a benign, friendly sort of way, and she's actually gone out of her way to be nice to me. Lord knows I haven't made it easy. Why she's being haunted, I have no idea, but it pisses me off.

When I walk in, Ghost Boy is, uncharacteristically, sitting at her desk. Genna is rifling through her dresser, looking for something. She's usually pretty neat—I guess Rosie checked that out about her too. I still organize her stuff when she's not around, but she hasn't said anything about it so far. It used to piss off Cadence, my roommate at the group home, but that never stopped me.

I drop onto my bed and am about to put in my headphones when Genna turns around.

"Caleb, meet Maia. Maia, Caleb." She points back and forth between me and her desk, then goes back to her dresser. Ghost Boy is staring right at me, but I avoid his eyes and look at Genna's back. I don't engage the dead anymore. Ignoring them has been working really well so far. And I know Genna can't see him, she never has before, so I have no idea what she's talking about. She slams her drawer shut, turns around, and smiles.

I'm looking at her like she's crazy. Who the hell is she talking to? Her phone is on her desk, and she doesn't have a Bluetooth. Something about brain cancer.

Ghost Boy stands up directly in front of me, blocking my view, and holds out his hand like he expects me to shake it. Genna comes up beside him and lays a hand on his outstretched arm. I shoot off the bed, unable to peel my eyes away from her fingers brushing his arm. She's touching him. His skin looks normal. Golden hairs dust his forearm. His hand is still stretched out to me; I reach for it tentatively, brushing my fingers across warm human flesh before pulling my hand back as if stung.

I feel like I have been stung. Shocked by a cattle prod is more like it. I look back and forth from him to her, disbelief cutting off my airways. What. The. Fuck?

Genna's staring at me like I'm covered in green slime, and Ghost Boy's eyebrows are up to his forehead. I shake my head, trying to clear it. I can't take this. It's too fucked up.

I leave my stuff and run out of the room. Run until the dizziness engulfs me and I collapse.