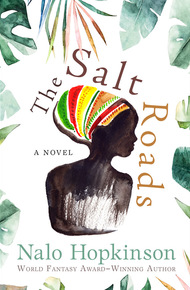 The Salt Roads by Nalo Hopkinson

In 1804, shortly before the Caribbean island of Saint Domingue is renamed Haiti, a group of women gather to bury a stillborn baby. Led by a lesbian healer and midwife named Mer, the women's lamentations inadvertently release the dead infant's "unused vitality" to draw Ezili—the Afro-Caribbean goddess of sexual desire and love—into the physical world.

As Ezili explores her newfound powers, she travels across time and space to inhabit the midwife's body—as well as those of Jeanne, a mixed-race dancer and the mistress of Charles Baudelaire living in 1880s Paris, and Meritet, an enslaved Greek-Nubian prostitute in ancient Alexandria.

Bound together by Ezili and "the salt road" of their sweat, blood, and tears, the three women struggle against a hostile world, unaware of the goddess's presence in their lives. Despite her magic, Mer suffers as a slave on a sugar plantation until Ezili plants the seeds of uprising in her mind. Jeanne slowly succumbs to the ravages of age and syphilis when her lover is unable to escape his mother's control. And Meritet, inspired by Ezili, flees her enslavement and makes a pilgrimage to Egypt, where she becomes known as Saint Mary.

With unapologetically sensual prose, Nalo Hopkinson, the Nebula Award–winning author of Midnight Robber, explores slavery through the lives of three historical women touched by a goddess in this "electrifying bravura performance by one of our most important writers" (Junot Díaz).

"It went in white, but it will come out a mulatto in a few months' time, yes?"

I was right; the oven of Georgine's belly was swelling up nice with the white man's loaf it was cooking to brown. I cackled at my own joke like the old woman I was becoming, stretched my neck a little to ease its soreness. A deep breath brought me salt-smelling air, blowing up from the cliffs at the foot of the plantation. Good to get away for a few minutes from stooping over sugar cane. Sixteen hours each day they had us working to bring the sugar in, and old Cuba the driveress would still push the first gang to pluck weeds sometimes into the deep of the night.

Georgine just stared at me in fear, never mind it was she had brought herself to me by her own will. Then she whispered, "No, Auntie, not just mulatto. I'm griffonne, my mother was sacatra. The baby will be marabou."

Eh. I ignored her, poked again at her belly, at her lolling on the flour bags that made my bed on the floor of my hut; she got to plant her behind in a softer bed nowadays—even had a mattress, I bet. I wondered if the ticks didn't bite her when she put her head on Mister Pierre's straw-stuffed pillows.

I knew Georgine's type. Made her road by lying down. Lie down with dog, get up with fleas, they say. Silly wench, with her caramel skin. Acting the lady because she worked in the great house, washing white people's stained sheets till her fingers cracked and bled from the soap.

Free-coloured Philomise had been making eyes at her; well-off brown man with his own coffee plantation and plenty slaves to work it, but no, our master didn't want a coloured to have her. Gave her instead to that yeasty-smelling carpenter imported to San Domingue—him from some backwards village in the ass end of France. And Georgine was puffing herself up now she had a white man, never mind he didn't have two coins to rub together.

True, she had cause maybe to be happy. Pierre was looking after her well. She might get two-three free children out of it too, and if she gave him enough boys, her Pierre might release her from slavery. When she was old.

But now she needed tending, and now that that flat-behind raw dough boy they called the plantation surgeon was too shy to even lay his hands on her belly to feel the baby, who did she come to? She didn't trust him. She wasn't an entire fool. Instead, she had found her high-coloured self to my hut.

And her carpenter had come with her too. Got time off from mending the wain carts as they burst under the weight of the cane they were carrying to the factory. Waiting outside, he was; screwing his hat into shreds between his big paws. Frightened I would poison his Georgine, his goods. All the backra round these parts were frightened of poison nowadays. Black people's poison was showing up in the food and bad ouanga in their beds. But Mister Pierre was more frightened to see woman's business. So outside he stayed, saying it was more decent.

Eh. What decent could mean to we with black blood? Who ever feared for my decency?

Niger woman spoiled fine as any lady. She'd best watch herself. Slightest thing she did that mispleased that backra man, he'd pack her "out of his little house.

I went to turn up the hem of Georgine's dress. She gasped, flinched. I sighed. "Can't examine you with all this cloth in the way."

She considered, set her mouth firmly. "Proceed, then."

I touched her dress again. A soft cotton hand-me-down from some backra's wife, and dyed a yellow pale like ripe guavas. The fabric caught on the calluses of my hands. I ruched it up around her waist, exposed her smooth legs, her pouting belly, her bouboun lips covered in black crinkly hair. She was even paler where the sun didn't touch her. Bleached negress.

Oh, but she was thin! Meager like the chickens scratching in the yard outside. "Eh," I muttered, on purpose as though my patient wasn't there, "would think the hair on the little bòbòt would be pale like the skin."

Georgine gave a small sound, made to push the dress back down with her hands, stopped. Good. The clean salt scent of Georgine's body came up in my nose, mixed with sweet rosewater. Me, I smelled of sweat. Her thigh under my fingers was velvet smooth like my baby's, long lost. My body was dry wood after years of work; the brand that had got infected and nearly killed me tunnelled a ropy knot on my thigh. Her yellow dress reflected the sun back in its own eye. My one frock was a colourless calico cut from a flour sack, washed a thousand times, that Tipingee had darned for me over and over again, for my hands were impatient with needles, unless it was to sew up a wound. Georgine's skin was steamed milk with a splash of high mountain coffee. Me, the colour of dirt in the canefields.

I poked and prodded at Georgine's belly while she tried not to squirm. I took my time, in no hurry to get back to the fields. My back was thanking me for having a rest. "When did you get pregnant?"

"I don't know, Auntie," she said in a small voice. Know-nothing girl child."