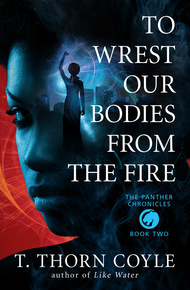 Their non-fiction books are Sigil Magic for Writers, Artists & Other Creatives, Kissing the Limitless, Make Magic of Your Life, Crafting a Daily Practice, and Evolutionary Witchcraft and the essay collection Resistance Matters. Their writing appears in many magazines, anthologies, and collections.

An interloper to the Pacific Northwest, Thorn often talks to crows, squirrels, and trees.

To Wrest Our Bodies from the Fire: The Panther Chronicles, Book Two by T. Thorn Coyle

1969: What happens when the government betrays your friends, and magic is the only power you have to save the world?

Jasmine Jones –nineteen year old hereditary sorcerer and proud member of the Black Panther Party– discovers that in the fight for what is right, you sometimes need to risk your life and challenge everything you know.

In a time of bullets and betrayal, when shape-shifters walk the streets and government agents stalk the astral planes, Jasmine and her comrades must stand strong.

To Wrest Our Bodies from the Fire: The Panther Chronicles, Book Two

Lizard thought that he was dreaming. There was pounding…and then, with a rush of air to the lungs, he was awake and coughing.

The smell of cordite and gunpowder assaulted him as the noise established itself as not inside his head, but just above.

A strange thumping sound, like boots kicking, coming from up on the roof, and the whump whump whump of a helicopter rotor.

Then Cotton's voice shouted from downstairs.

"Wake up! Wake up! They're coming in!" followed quickly by the bam, bam, bam and the splintering crash of wood exploding inward. The downstairs door was being battered down.

Lizard shook himself upright on the raspy carpeted floor, raking a hand across his eyes to clear them. His other hand was already on the rifle he'd fallen asleep next to. The rapid fire of automatics, punctuated with the carefully placed shots from a .45, cracked through the small building from downstairs.

Light flashed through the doorway every time a gun fired. The light was jagged, smoky. Gunfire was the only light aside from the streetlights outside the chicken-wire–reinforced windows. The skylight in the center of the room was a black rectangle of night.

What time was it? The flashing gunfire shattered the room as he scanned for movement with night-adjusted eyes.

There was the table where they put together propaganda and held meetings. The ersatz kitchen on a card table in the corner. The odd assortment of chairs.

And the sandbags forming little squares just big enough to hold a man or two near the windows, stacked three feet high. Not as well fortified as the ground floor, but protected all the same.

Was anyone else in the room? PeeWee nodded at him from his place against the far wall. Lizard could just make out his bulky shape, his ragged natural, and the handgun, point up, ready to level at the first person who dared come up.

"Go," PeeWee breathed out. Lizard crawled toward the door at the top of the stairs, crouching just beside it, ready for whatever came through. The scent of discharged guns wafted up the stairs. What the hell was going on down there?

A shot ricocheted off the outside of the doorframe. Bracing his shoulder against the wood, rifle reaching around the corner, Lizard fired down the stairs. No clue if he hit anyone.

More shots came toward him; bullets lodged in the ceiling and a shard from the doorframe nicked his ear.

Lizard hissed out and shot another round at the boots coming up the stairs. There was a grunt, and a body slammed against the wall. Got something that time.

"They're shooting back!" he heard. Then more boots on the floor. The stairs? Coming up? No. No. Going out. The pigs were leaving.

PeeWee's eyes got wide at that. Lizard bet his were, too.

He exhaled. A moment of relative quiet. The house settled. Some rustling. Breathing. The ringing in his ears. The right one stung. He chanced a hand up. Blood.

Then Geronimo Pratt's voice came from downstairs. "Okay! We got a few minutes. Get what you need!"

PeeWee told Lizard to hold on and ran, combat boots thumping down the wooden steps.

He came back shortly. "More ammo is coming. Stay put."

Lizard itched to open the gun slats in the walls, but the light would only draw fire. It was so fucking dark still. The glowing tips of the hands on his watch face pointed to 5:20. Damn.

Peaches and Tommye thundered up the stairs, heading to the far corner where desks were set up with phones. The women dragged heavy rotary phones off the desks and crouched in the spaces underneath, shoving the chairs aside.

Peaches must have been calling for backup; her low voice was urgent, words cutting in and out of Lizard's awareness, warring with Tommye's softer voice, somehow calm in the middle of all the mess. Tommye must've been talking to the news. Reporters down with the cause. Or at least holding out some sympathy for a group of Panthers getting shot out by the pigs.

The panting of his own breath sounded loud in the relative quiet, and he fought to slow his breath down. That Chinese shit Geronimo Pratt was always on about in training. "Quiet the body, you quiet the mind."

That cat had given him the gun he held now at 2:30 that morning, around the time Lizard bunked down on the floor.

Just a few hours ago.

Roland Freeman ran up the stairs with fresh bullets, carrying his own rifle. The comrades downstairs would also have Molotovs and pipe bombs. Lizard knew that, because he'd made up a bunch just days before. They'd be useful if the pigs made it back into the house. Keep them out of the room. No use upstairs though, with the chicken wire in the way.

Noise started up again. Not deafening, but confusing to the mind. Helicopters whumping. Shouting men. More gunfire. The women's voices raising as much as they dared, trying to cut through the clamor to the people on the other end of the line, without giving exact physical positions away to the pigs just outside the building.

Shifting onto his knees, Lizard got the balls of his feet under him and crouched in a run across the room toward the windows.

Once there, he struggled to reload, sweat running down his body. There was still barely any light.

Must be 5:30 in the morning and he was crouched next to a door in a room fortified with sand in the walls and sandbags around every window, a rifle slick in his hands. He didn't want to pause to wipe them, but his grip kept slipping. Should've wiped the whole gun down, but there wasn't any time.

His hands rasped down the chinos he'd slept in, one at a time, then back to the wooden stock, leaning against those bags packed tight against the walls, three feet high.

The bags that were keeping him alive.

An incendiary burst against the window, punching the glass. Lizard ducked his head on impact, to save himself a face full of glass knives. The chicken wire held. The incendiary didn't make it through.

Someone shouted "Fuck!" and an explosion happened down below, in the street.

"Ssshhhhhupp!" and the clink of a projectile against chicken wire. Tear gas seeping through. Damn. One hand on his rifle, the other patted pockets. No smokes. His eyes started to sting.

"Any smokes in the room?" Lizard called out. PeeWee tossed a packet over. He slid out two, then tossed the packet toward the women under the desks.

Quickly breaking the cigarettes off near the base, he shoved the filters up his nose. The scent of tobacco and mint warred with the scents of gunpowder and gas.