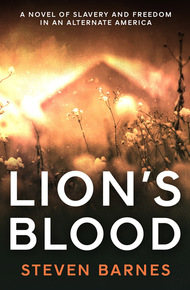 Steven Barnes is an African American science fiction writer, lecturer, creative consultant, and human performance technician. He has written several episodes of The Outer Limits and Baywatch, as well as the Stargate SG-1 episode "Brief Candle" and the Andromeda episode "The Sum of its Parts". Barnes' first published piece of fiction, the novelette The Locusts (1979), written with Larry Niven, and was a Hugo Award nominee.

In the year 1863, a primitive village is raided, the men killed, and the women and children captured. The survivors find themselves chained in the dark, filthy hold of a ship crossing the ocean to the New World, where they are sold into slavery. The powerful master of a vast Southern plantation purchases the 11-year-old Irish lad Aidan O'Dere. Yes, you read that right—in this alternate America, the South was colonized by black Africans, and the North by Vikings, who sell abducted Celts and Franks to the Southerners.

Through his brilliant inversion of our history, author Steven Barnes examines the complex evils of slavery in a new light with Lion's Blood, an intelligent and exciting novel of freedom and bondage, battle and intrigue, sex and love, set in an America threatened by total war as Aztecs, Zulus, Moors, and whites clash.

I've been a fan of Steven Barnes work for a decade or more. His alternative history fiction narratives are demonstrative works that allow readers to glimpse a different past…and a different future. Pasts and futures that weren't built on the pain of their own ancestors but their glories. In his Insh'Allah Series he brings that potential narrative to light. – Terah Edun

The stench of burnt wood and flesh wafted with the uncaring breeze as women, children, and a few miserable, broken men were herded toward the ships, arms bound at their sides. One at a time the captives were shackled at the ankles with stout metal bands tight enough to numb limbs. Jarring hammer strokes locked them into place. Each bore a loop through which thumb-thick chain links were passed, connecting each miserable soul to another.

Aidan looked into the faces of the captive men and saw shock, disbelief, horror, and bleak resignation. Riley, the tuath's massive blacksmith, was one such. Aidan understood why: the shambling, shamefaced Riley had preferred captivity to death. Aidan hated him. He should have died! Died as had Mahon O'Dere, fighting to be free, fighting for his family. Better a swift and endless sleep than this disgrace. Had not Aidan a sister and a mother to protect, he would have chosen the first good moment to jump overboard and drown himself.

A brawny Northman locked the chains into place with thunderous hammer strokes. Nessa tried to kick him, and he casually backhanded her across the face so hard that at first Aidan thought her neck was snapped. She fell limply back, but the giant simply grabbed one of her ankles and dragged her forward. For Aiden, it was like watching events in a nightmare, submerging him in an ocean of rage so deep it blackened thought.

Now it was his mother's turn. Never had he seen her like this, wild-eyed, and almost like a drunkard. Her eyes were rolled up exposing the whites, and she pulled against the pig-eyed Northman's brawny arms. "Mary! Oh please, Mother of God," she screamed over and over again in a voice not entirely her own. "Do not forsake us!" Her thrashing was without aim, without real thought, almost as if she were some kind of dangle-toy twisting in the wind. After the chain was hammered on she was shoved aside and Aidan hauled into position.

He struggled without effect, and the Northman slapped him across the face. Stars exploded, the white sparks extinguished in an ocean of red, and then black. When he came to his senses, the first strokes had already fallen, linking him to the wall. His mouth felt swollen and nerveless. The boy's eyes narrowed as he ran his tongue around his mouth, tasting blood. He longed for a knife, a boat hook, a sword. Something to grasp in his hand as he leapt and died gloriously.