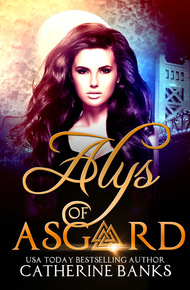 Catherine Banks is a USA Today Bestselling fantasy author who writes in several fantasy subgenres under two pseudonyms. She began writing fiction at only four years old and finished her first full-length novel at the age of fifteen. She is married to her soulmate and best friend, Avery, who she has two amazing children with. After her full time job, she reads books, plays video games, and watches anime shows and movies with her family to relax. Although she has lived in Northern California her entire life, she dreams of traveling around the world. Catherine is also C.E.O. of Turbo Kitten Industries™, a company with many hats including being a book publisher and Etsy store full of nerdy fun.

Alys of Asgard by Catherine Banks

Despite being raised by Odin, All Father of the Norse Gods, Alys has come to realize her presence in Asgard is throwing the balance and flow of life completely off-kilter. She opts to move to Midgard—Earth—but the transition is far from smooth. Discoveries lead her to realize her adopted father has lied to her all her life, and with all she thought she knew stripped away, it is up to Alys to uncover the truth about who she really is.

We have four new releases in this bundle. Two had just come out and two are exclusive to the bundle. Catherine provides one of our exclusive books, Alys of Asgard. She just finished this book. Her computer was still smoking when I contacted her about the bundle. You can't get this book anywhere else.

Catherine writes almost as many series as I do, and she has two pen names. Readers love her work, putting her on the USA Today bestseller list, and gobbling up each new release. I suspect they'll like this series as much as they like her other series. And you all get first crack at it… – Kristine Kathryn Rusch

I was fighting to stay awake one evening when Heimdall leapt up to his feet and growled, "Run home!"

I jerked myself upright, suddenly very awake, and started to run from the room, but I wasn't fast enough. A dark elf appeared in the room, having transported himself from Svartálfaheimr, and smiled at Heimdall. "I'm here to see the All Father." I started to move again, but the elf snapped, "Stay put, mortal!"

I stopped moving and Heimdall strolled towards me slowly until he was standing between me and the elf. I couldn't control my body. Why not? Why couldn't I move? "Leave the mortal out of this. Odin is on his way here," Heimdall said with clenched fists.

"Who are you, child? Why is a mortal on Asgard?" the dark elf asked.

"That is none of your concern," Odin said when he entered the room. He looked at me, "Leave us."

I didn't need to be told twice. Odin released whatever spell had been on me and I walked out of the room slowly to show the dark elf that, with Odin there, I wasn't frightened of him and then ran as fast as I could towards my house. I made it halfway there and fell to my hands and knees to catch my breath and calm myself down. I had never met such an imposing being before. That elf had pure black eyes that held no warmth in them. I didn't doubt for a second that he would kill me if he decided to on a whim. I had been utterly powerless against him.

"Alys, what's wrong?" Loki asked me as he dropped to his knees, and placed a hand on my back. The fear was consuming me. I turned and latched onto Loki, gripping his shoulders tightly. "Shh," he cooed, "You're safe. I'm here. I'll protect you from anyone."

I couldn't speak. The eyes of the elf burned into my memory and that was all I could see, no matter if my eyes were opened or closed. He had been evil down to his core. I couldn't let that happen to Loki. If that happened to him, I didn't know what I would do.

Loki stood up with me in his arms and started walking, all the while talking to me in soothing tones and telling me over and over again that he would protect me. Could he protect me from someone like that? I couldn't bear it if he was killed protecting me. The elf had to be a dark elf because I had heard stories about other elves that were peaceful. That elf had been violence and evil incarnate.

Did a being like that have a conscience? Or did they simply enjoy killing and felt no repercussions from their acts?

"Alys, what happened?" Loki asked me.

I realized that we were in his house, sitting in front of his fireplace with a roaring fire going and a blanket around the both of us. He must have assumed that my shivering was from cold instead of fear.

"Someone entered Asgard," I whispered. "Odin came, but he…" was petrifying. Was evil.

"Did he hurt you?" he asked through gritted teeth.

I shook my head and then turned around to bury my face against his chest. "He was terrifying," I whispered after a moment.

"You're safe, Alys. I swear I won't let anything happen to you," he whispered.

"I'm sorry," I cried with tears streaming down my face. "I'm sorry."

"Shh, you don't need to apologize for being frightened. Shh, it's alright, Alys."

"Loki, he felt so evil. He talked to me and I couldn't move. I couldn't control my body until Odin came."

"He won't lay a finger on you," he said adamantly and started to stand up.

He grabbed my wrists gently and I released my death grip on his shirt. "I'm not leaving you. I'm just getting you a mug of water."

"Oh." I sat down and watched as he filled a mug with water. He was acting so calm that I started to calm down myself. He handed me the mug and I drained the contents and asked for a second one, which I drained as well. "Thank you."

He sat back down and wrapped us up in the blanket again. "You don't need to thank me. I'm here for you anytime that you need me."

"Are you ever frightened of other beings?" I asked with my head on his shoulder. I took a deep breath of his scent and understood what Thor had said about wishing to bottle someone's smell.

"No, but it's good for mortals to be afraid. It will keep you alive longer," he said as he rubbed my back.

My eyelids began drooping and a yawn escaped. "Sorry, I didn't realize I was tired."

"You weren't, but I gave you a sleeping aid," he said with a laugh.

"Why?" I asked him. I knew he wasn't going to do anything bad to me. That wasn't Loki's style. He preferred you to beg him.

"I need you to stay safe, and the only way to do that right now is to make you go to sleep. Plus, this will help with your fear." He picked me up and laid me down on his bed and then covered me with blankets.

"Don't leave me," I whispered as my eyelids grew heavier by the second.

He kissed my forehead and whispered, "I will always be with you and only a second away if you call my name. Right now, I need to go ensure Asgard is safe."

"You said you wouldn't leave me," I said around a yawn.

"The Trickster must tell some fibs once in a while, most especially when it is necessary."

"Jerk," I mumbled as my eyes closed and the warmth of the bed pulled me into dreamlands.

I felt him kiss my forehead again and then he was gone.