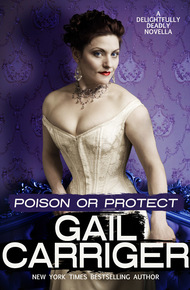 Poison or Protect by Gail Carriger

London's most scandalous lady assassin versus one very hot Highlander.

Lady Preshea Villentia, the Mourning Star, has four dead husbands and a nasty reputation. Fortunately, she looks fabulous in black.

What society doesn't know is that all her husbands were marked for death by Preshea's employer. And Preshea has one final assignment.

It was supposed to be easy, a house party with minimal bloodshed. Preshea hadn't anticipated Captain Gavin Ruthven – massive, Scottish, quietly irresistible, and… working for the enemy.

In a battle of wits, Preshea may risk her own heart – a terrifying prospect, as she never knew she had one.

I read Gail Carriger's Parasol Protectorate steampunk series completely cold. No one had recommended it. No one that I knew had reviewed it. I just liked the cover and the first line and the sense of whimsy throughout. The next thing I knew, I had read all of her steampunk books. When I first asked her into the bundle, I thought she could contribute something from her San Andreas Shifter series (which she writes as G.L. Carriger). Instead, she gave me this book from her Delightfully Deadly series—which I had somehow missed! I'm now reading very fast to catch up. – Kristine Kathryn Rusch

Gavin knew who she was the moment he saw her. He also knew there was a good chance he would have to kill her. Assuming, of course, she didn't kill him first.

Lady Preshea Villentia. The Mourning Star. Widowed too many times under suspicious circumstances, too smart to be caught, and too beautiful to be ostracized. She was like opiates – expensive, intoxicating, and deadly in large doses.

He wasn't sure exactly how he knew it was Lady Villentia. They'd never been introduced. They didn't attend the same social functions (her circles being more rarefied than those of a mere army captain).

Also, she was standing with her back to him.

Yet he did know her.

He'd read the papers and dismissed their breathless descriptions as romanticized nonsense. He'd seen the sketches and assumed a great deal of artistic license. To his chagrin, he realized now that neither had done her justice.

She moved into profile.

The lady was a porcelain doll, perfect in every detail, delicate as fine china and no doubt more costly. Yet she directed the porters with the sure command of any field marshal.

She must be attending the same house party. There was no other reason for a woman of such exalted skills to disembark at a country station. It was reasonable to assume her ultimate destination was the Snodgrove gathering. And equally reasonable to assume, Lady Villentia being an assassin, that she was there to kill the duke. Which meant Gavin was there to stop her.

She turned into the light.

It wasn't that a chorus of angels opened up and sang. Nor did pixies sprinkle fairy dust in his vision. For the day was all gloom and grey, and the engine of the train was as smelly and loud as may be. Gavin, however, was horrified to feel his world start to shift, right under his massive boots. Usually, he was brick-wall steady, and brick-wall solid. But now his entire body, like a magnet to iron, centered on Lady Villentia.

Lust, is it? Isna that convenient? Hell's waistcoat.

Her figure was neat and slender under a green carriage dress of pure simplicity with gleaming jet buttons down the front. She wore a little velvet hat, as dark and glossy as her hair. She lifted one hand to test its presence, showing black leather gloves.

"My, my, that one has stepped off the pages of a French fashion periodical." Jack followed Gavin's gaze and was struck as well, although perhaps not quite so dumbstruck.

"Nay. Too wee for that," Gavin was moved to grumble.

Jack laughed, a spark of joy that caught the lady's attention. Fortunately, Jack then lowered his voice. "Yes, yes, you like more to grab hold of."

Gavin was known amongst his friends for his abhorrence of tiny females. But such a widely stated preference suddenly seemed absurd.

Every part of Lady Villentia was covered but for her heart-shaped face – white and emotionless. A ceramic doll in truth and likely just as cold. Except there… For one unguarded moment beneath all that beauty, her eyes flashed a depth of misery he'd seen only in the worst slums.

She blinked and it was gone.

Jack continued, "That one looks more wax than human. Were it not daylight, I'd think her vampire."

Gavin did not point out the idiocy of that statement. Even were it night, no female vampire traveled. Queens could not leave their hives. He had to presume Jack knew this, or his friend was thicker than treacle.

Luggage accumulated, they all moved towards the exit. Yet they were a thousand miles apart for lack of introduction.

Lady Villentia even walked beautifully. Gavin found himself, preferences be damned, imagining what it might like to unbutton that dress. One jet bead at a time, from top to bottom, until he knelt at those tiny feet.

Are ye daft? he reprimanded himself. Assassin?

A private dirigible awaited them outside the station. The Duke of Snodgrove, a consummate host, had seen fit to provide the most modern conveyance. Gavin could have wished him to perdition. He detested floating, and had hoped for something faster after so long a train ride. Dirigibles were all well and good if one wanted to waft about the countryside, taking in views. Gavin wanted his tea.

And not to have to kill Lady Villentia.

The lady in question regarded the Snodgrove crest with her head cocked, showing a slender white neck.

At their approach, she turned with a practiced smile. "I believe we may be traveling together, gentlemen. To Bickerstung Manor?"

Gavin and Jack responded as expected, with bows of agreement. Gavin thought her smile slightly painful, both for her to give and for him to receive. The sorrow in it hurt the space between his eyes. Verra inconvenient.

The jet buttons winked at him.

It was for her to continue. "Might we dispense with the formalities? Otherwise, it will make for an awkward float. I believe our host is under the mistaken impression that we are already acquainted." She spoke with such precision. Her pert lips slaughtered each word as it left her mouth.

Gavin recovered his voice. "Oh, aye? And why is that, lass?"

"I believe he thinks everyone knows me."

At which juncture Jack, the nincompoop, blurted, "Good God, you're the Mourning Star, aren't you?"