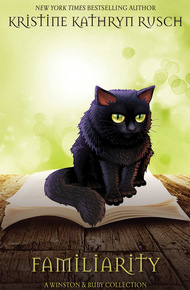 Winston: A kind and quiet wizard possessed of small magic.

Ruby: A familiar with a big mouth and even bigger heart.

Okay. Me. Sigh. I'm not very happy writing about myself, which is why I write fiction.

My book Familiarity is one of the four new releases. It just appeared a week or so ahead of the bundle. In fact, I put the book together for the bundle.

You see, my readers had fallen in love with my characters Winston & Ruby. Winston is a mage with very little magical ability, and Ruby is his familiar. I first wrote about them for some sorcery anthologies. Readers noticed and started clamoring for more Winston & Ruby stories, as well as a collection. I've added to the story list, and I've provided a collection.

Winston & Ruby live on the beautiful but stormy Oregon Coast, where I live as well. The isolation doesn't protect them from things that go bump in the night, but they handle these crises better than I would. Enjoy! – Kristine Kathryn Rusch

The bell above the shop door tinkled. Winston looked up in surprise. It was February, it was Tuesday, and it was raining—the hard cold downpour that made all but the hardiest locals complain. Tourists rarely came to Seavy Village in February, and if they did, they spent most of their time holed up in a hotel room staring at the ocean. They certainly didn't come to a run-down magic store in a run-down part of town.

"Hey, big guy." Ruby, his familiar, stood underneath the beaded curtain that hid the back lab from the storefront. She was still a kitten, although she didn't talk like one. She never had, really. But she was healthier than she had been when he found her. Her black coat shone now, and she had the lanky swagger most normal six-month olds had. "You got a customer."

"Thanks, Ruby," he said softly and got up from his stool. His back hurt. He'd been mixing potions all morning, filling mail orders that would go out in the afternoon's UPS. The summertime tourist trade supplemented his income. He kept the store for them, but with the advent of the internet, he really didn't need the extra advertising. The store just gave him and Ruby a place to spend their days.

He walked through the beaded curtain and stopped as he entered the narrow storefront. A woman stood near the dirty display window, studying a shelf of cut glass potion bottles. All were empty and most were antiques, things he had acquired in trade or found in the junk shops that ran along this stretch of Highway 101.

She looked up when she saw him. She was slight, with oval-shaped brown eyes hidden by large glasses. Her dark hair was pulled away from her face, in a style too severe for her round features. Still, he could see, no matter how hard she tried to hide it, she was very beautiful.

"Are you Winston?" she asked.

He nodded, his heart in his throat. People never came to the store looking for him. They came to find baubles, silly souvenirs from their vacations.

Ruby had come up beside him. She leapt on the counter and lay across it. She knew his history, knew that he had run from San Francisco twenty years before with the police on his heels. He'd always tried to convince himself that no one cared about him, no one would come to the Oregon Coast looking for him. He had changed his name, and he was twenty years older.

He hadn't made a mistake since.

"I've come from Ohio," the woman said. "I've been looking for you."

It was the tiny movement, the double clasp of her hands over her purse strap, the tension in her shoulders that made him realize she was afraid of him.

No one had ever been afraid of him, even after they had found out what he was. He was a small wizard with even smaller magics, not like his mentor who could have destroyed an entire town with the snap of a finger, or the crazed woman he'd met at a Nevada roadside twenty years before, who had burned up her entire family—even the scattered members all over the country—simply by cursing them.

"Looking for me?" he repeated, rather stupidly. He felt a flush build in his cheeks. Would the police still be interested, all these years later?

"Yes. Looking for you." She glanced around, her gaze stopping on the mass market items he kept for the tourists—the cheap magic kits, the books on magic tricks, the pinwheels and the silly jewelry. "Are we alone here?"

"Except for Ruby," he said putting his hand on the cat's silken back. "But she knows all my secrets."

The woman looked at Ruby as if she were seeing the cat for the first time. "I was told by a man in New Orleans that you could help me."

Winston felt a bit of relief then. Many of his referrals came from New Orleans, from the voodoo shops and the tourist traps, places his shop had been modeled on. Many of his kind found a refuge on Bourbon Street, where no one questioned oddity of any kind.

"Then he should have told you that you didn't have to come here," Winston said gently. "I do most of my business by mail."

Her gaze met his. The glasses distorted her eyes slightly, making the lashes larger than they should have been, the eyes bigger and more vulnerable.

She shook her head. "He said this was the one time I would have to come."

Winston moved closer. "What do you need?"

His smile was small. This was why he hated having customers come in person. They expected more from him. They expected him to be like Gandalf the Great or like the wizards they'd seen on television. All knowing, all powerful, charismatic and forceful and strong.

She sighed and loosened her grip slightly on her purse. "I know," she said. "I guess I was looking more for a solution, one I haven't been able to come up with."

He was silent. He didn't diagnose. He was like a pharmacist. Someone else diagnosed and prescribed. He fulfilled the order.

"The man in New Orleans said you were the most creative wizard he'd ever met. He said you'd know what to do."

The compliment didn't move him. "I have a small talent," he said. "Nothing that would warrant a trip from Ohio."

He turned his back on her and parted the beaded curtain. Ruby jumped off the counter and loped toward the back.

He bowed his head. Ruby cursed softly, something about dogs and men and stupidity.

He never let anyone inside his inner sanctum. For the nineteen years he'd owned the shop, ever since he'd arrived in Seavy Village, he'd been alone except for his familiars. First Buster, who arrived with the cliff house that Winston rented and finally bought, and now Ruby, who'd appeared the day after Buster died.

The woman held the beaded curtains apart and stared at the filled bottles, the careful labels, the cluttered worktable. It seemed to Winston that her skin had paled considerably.

"I don't think this is such a good idea after all," she said.

He waited. This was new for him as well.

After a moment, she let the curtains drop. They clicked against each other. He started to follow her, but Ruby moved in his path.

The bell over the door jangled, and then he heard the door click shut.

"She came all the way from Ohio," he said.

"Yeah," Ruby said, sarcasm in her tone. "By way of New Orleans."

He concentrated on his cat. Her yellow eyes filled her black face. "Do you even know where Ohio is?"

She bristled. "I watch TV, same as you."

He nodded, not quite sure how to take that, and let himself out the beaded curtains. The front of the shop felt emptier and colder than usual, and he couldn't shake the feeling that he'd made some kind of mistake.