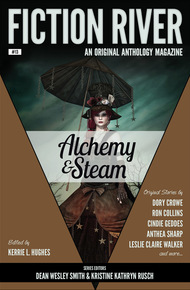 Alchemy and Steam by Fiction River

Alchemy changes more than dross into gold. It changes steampunk stories into stories of magical transformation. These thirteen stories combine science and magic into do-not-miss alternate history stories that span the globe. Travel with a soul-stealing carnival, meet the Grand Dangoolie, put on some perfect perfume, and sample some magical chocolate. These adventures grace the pages of the most creative volume of Fiction River yet.

Table of Contents
"The Rites of Zosimos" by Angela Penrose
"Heart" by Leslie Claire Walker
"Pennies for Portents" by Diana Benedict
"The Order of the Golden Grapefruit" by Sharon Joss
"The Perfect Perfume" by Anthea Sharp
"The Grand Dangoolie" by Ron Collins
"The Whirring Dreams of Aberrant Blood" by Cindie Geddes
"St. Jean & The Dragon" by Brenda Carre
"Weight in Gold" by Dory Crowe
"Heaven's Flight" by Leigh Saunders
"Blood Moon Carnival" by Kim May
"Makes the World Go 'Round" by Kelly Cairo
"Myrtle's Boxes" by Louisa Swann

Once we decided to add steampunk to this StoryBundle, I had to include Fiction River: Alchemy & Steam. It's our steampunk issue, and it has some of my very favorite stories inside. Some of the stories are dark, like Cindie Geddes' "The Whirring Dreams of Aberrant Blood," and some are charming, like Anthea Sharp's "The Perfect Perfume," but every single story is top-notch. The anthology includes our token male writer, Ron Collins, with a wonderful story called "The Grand Dangoolie." Of course, he wasn't chosen as a token, but because his story is strong, and honestly, when I thought of the volume, I thought there would be more stories by guys inside. I hadn't realized the volume was mostly female.

Lots of great magic here, lots of great steam, and some surprising characters as well. This is one of the most popular volumes of Fiction River, and once you start reading, you'll understand why. – Kristine Kathryn Rusch

Once upon a time, I edited The Magazine of Fantasy & Science Fiction. My mandate there was this: I had to edit a brand new issue of the magazine that felt like previous issues, but was completely different from the previous issues.

Every magazine editor deals with that mandate. In magazines from Esquire to TV Guide Magazine, from Asimov's to Lightspeed, editors must do what they've done before, only different.

Here, at Fiction River, Dean Wesley Smith and I designed the anthology series as a magazine in that it comes out at regular intervals. But we want every volume to feel different and not be the same as previous volumes.

We act as series editors to ensure that story quality remains high, and that's all we do. The rest is up to the individual editors. And so far, our guest editors have gotten into the spirit.

Alchemy & Steam is the second Fiction River volume that bestselling editor Kerrie L. Hughes has edited for us. The previous volume, Hex in the City, involved magic and cities and spells. This volume is pure steampunk. Yes, there's magic. But there's a sense of history here that the previous volume didn't have and a scientific attitude completely missing from Hex in the City. Kerrie has hit steampunk perfectly—and in doing so, made this volume different in both style and substance from her previous volume.

Editing is an arcane science, much like the alchemy that Kerrie mentions in her introduction. Ask any editor, and she'll tell you everything she wants in a logical, laid-out fashion. Then present her with a story that's brilliant but might not fit the logic perfectly, and she'll make it fit.

In fact, it'll seem like that story belonged right from the start.

Kerrie has the editing gift. And it shows in this volume. I recommend that you read it from beginning to end, because Kerrie takes you on a heck of a journey—filled with steam and chocolate and automatons, and heart and passion and warmth.

Alchemy & Steam is unlike anything we've published at Fiction River. And yet, the stories are stellar, just like you'll find in previous volumes.

Hmmm. Maybe that does make this the same, but different. Just not in the way we're all used to.