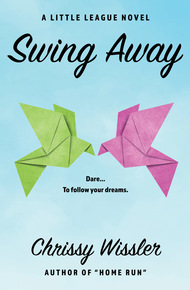 Swing Away by Chrissy Wissler

All thanks to her famous dad, the newest 'hot-thing' in baseball.

"Swing Away," the first novel in the Little League Series, continues the story of friendship, home, and love. And the courage needed to find your own path.

Fame can be a wonderful thing… not so much when you're a teenage girl stuck in your famous father's shadow. Chrissy Wissler is an author who writes passion for sports and emotion very well… and Swing Away weaves both into a story about a softball player trying to win more than a game. – Nick Harlow

Jenny didn't bother hanging her mom's handmade curtains, the same curtains her mom made every time they moved. After all, what was the point?

She glanced at the bright floral designs, like someone had exploded a garden onto the fabric, cringed and tossed them back into the moving box labeled 'Jenny's Stuff.'

She scowled at the other half-dozen boxes, hands on her low-riding jeans as her iPod cycled through to the next song. Hell, what was the point of even unpacking?

"Because there is no point."

Not when her dad could wind up with another stupid team at the end of the season and then poof! She'd be in a new city, a new school… and on another damn softball team.

From her cracked open door, she heard her mom humming in the kitchen two stories below, followed by the familiar crashing and tinging of copper pots being hung, of silverware finding a new home.

The silverware probably had a better idea of what 'home' meant than Jenny did. At least the plastic tray they stayed in remained the same.

Unlike Jenny and her whole damn life.

The phone rang and her mom's voice changed from normal to excited.

Jenny kicked the nearest box with a booted foot. Well, she wasn't excited. Not about him calling and not about them moving.

"And they can't make me unpack."

So, she didn't. She threw her long brown hair into a ponytail, slapped on a baseball cap (this one from the team her dad ditched two months ago), turned the music up, and shoved first one box, then another into a corner.

By the time her mom hung up (not like Jenny was actually listening—even though she had one ear bud out), Jenny had finished 'unpacking.' She surveyed her room, worrying her bottom lip, and tried not to think about how dull it looked.

But dull was okay, right?

After all, no sense getting cozy if she'd be up and moving in another handful of months.

"Jenny! Your dad called." Her mom poked her head in, her smile dazzling and bright. A smile Jenny only saw when Dad decided to grace them with his presence. "His plane just landed from Arizona. No more spring training and no more putting off family time."

Her smile fell when she noticed the boxes neatly stacked between Jenny's bed (yes, she at least had made it—even tucked in the damn sheets) and her bare closet.

And no, she hadn't actually bothered to hang anything.

Let her shirts get wrinkled for all she cared. It wasn't like she was trying to make an impression, or hell, even make friends.

Her mom opened the door the rest of the way, then mirrored Jenny as she stood with her hands on her hips. "I thought I asked you to unpack?"

There was a slight pause, a pause only accented by her mom's diamond earrings as they glinted from the southern California sun as it struck unhindered through the un-curtained windows.

Curtains her mom noticed piled on top of the boxes. "I know this is hard on you."

Because Dad liked to come home bearing please-forgive-me gifts, like the diamonds her mom now wore.

Okay, maybe that wasn't quite fair. Never in her life would Jenny want to be in her mom's shoes, but still… her mom was also an adult. An adult, by the way, who was fully capable of putting her foot down and saying enough of this bullshit.

She didn't, of course. And Jenny was fairly certain the diamonds had something to do with it.

Jenny, however, had absolutely no control over her life. No control of where they moved, of which school she transferred to, or hell, even which softball team she played for.

Why? Because she was sixteen freakin' years old, and right now, even her ability to drive was vetoed at the whim of her dad.

But if there was one thing her mom insisted on, it was control over the household life.

Her mom's lips pinched into a tight line, but she said nothing about the curtains and instead hung them up herself. The sun's glare was suddenly cut off and Jenny couldn't help but see how her life felt the same way.

"I know this is hard," her mother said again, "but I know this time it'll be different. You should have heard your father on the phone. He's excited. He can't wait for Opening Day, can't wait to take us both down to the clubhouse."

"Uh-huh. Right. You mean, he's more excited than he was for Chicago? Or Pittsburgh? Oh, and how about San Diego?"

"Jenny." Her mother jerked the curtains in place, like she was going for the perfect curtain arrangement or something. Whatever. "You're not making this easy."

"Gee, I sure wouldn't want to inconvenience you or something."

"He's got a real opportunity here. The Anaheim Chargers really wanted him," her mother continued, "and this is a real shot for your dad to make it big."

From where Jenny stood, staring out a three-story mansion overlooking the beautiful coast, she didn't think you could get much bigger in Major League Baseball.

Other than bigger checks.

Which, to put it bluntly, was Dad's reason for accepting the deal with the Chargers. Sam Taylor, the newest hot thing in baseball (and highly sought after), had taken to being a free agent like a dog takes to peeing on every single freakin' bush. And let's face it, he'd wrung out the Chargers for every cent he could.

And even though it was a three-year, couple-million dollar deal, Jenny knew in this game three years didn't actually mean anything. What it meant was they might stay in one location for three years. But the odds of that actually happening?

Let's just say getting traded to some other team half-way across the country was more likely.

Her mother finally finished with the curtain, and stood in front of Jenny. She tugged the remaining iPod ear bud from Jenny's ear and her familiar, comforting music vanished.

Her mom even placed a hand on Jenny's shoulder as if her touch would make it better.

Life didn't work that way anymore. In fact, it'd stopped working like that some time ago. Like when she was five.

No more kissing bruised knees would make her life better.

"Aren't you at least going to try? Don't you want to fit in?"

"What's the point?" Jenny stepped back and her mom's hand fell. "How many friends have I left behind? How many schools have I been to in the last two years?"

Jenny felt traitorous tears swelling in her eyes. She absolutely refused to cry about this!

Her mom sighed. "I'm disappointed in you. This can be an opportunity for you too, if you let it. But if you don't readjust your attitude you'll never be happy."

"Happy? Like you?" Jenny slammed her mouth shut but the words were out.

They hung in the air between them, cold and hurting. Her mother looked away first. She reached up, lightly touched one of her diamond earrings. As much as Jenny was mad at her mom for putting up with Dad and his bullshit, she also didn't want to hurt her.

There were certain 'things' Jenny didn't mention to her mom.

And there were certain 'things' her mom very carefully ignored.

Her mother straightened, smoothing out her dress and trying to smile, trying to act like what Jenny had said was no big deal at all.

They both knew better.

Her mother said nothing.

Like it or not, they were a family, and at the end of the day the only person Jenny had—who Jenny could rely on—was her mom.

She couldn't rely on her dad. And lately, she couldn't even rely on softball. Even the small spark of joy she used to feel the moment she stepped onto the pitcher's mound, breathed in all the sights and sounds of the game, of when she pitched the first ball of the game… even that had disappeared.

And she didn't know why.

From the corner of her eye, Jenny noticed the shining, gold-colored tip of a trophy sticking up from one of the boxes. Her most recent trophy, the one her team had won at the Tri-Ace 16 and Under Tournament in San Diego. One of many, many trophies and the only stupid reason it wasn't packed away with the others (and the legions of dust they'd gathered over the years) was because of Dad.

Dad, who hadn't yet seen it yet. And then after he'd smiled, preened and pleased with himself and his legacy daughter, it'd get shoved away with the others. After all, her trophy collection didn't warrant the kind of attention his did.

Jenny tossed her iPod onto the bed and reached to slam the cardboard flap back down to cover the trophy. She didn't make it. Not before her mom saw it.

It was like seeing Jenny's trophy had flipped a switch. Like it gave her mother permission to smile again, to wave away the tension in the air like it was a cloud of too-expensive, stale-smelling perfume.

Her mother rescued the trophy from the stack of boxes and actually wiped off the 'Congratulations Winner' engraving with the hem of her dress. "You should bring this down. Your father can't wait to see it."

She didn't want to show him the damn trophy. "Why? It's not like it matters."

"Of course, it matters. Jenny? What's gotten into you?"

Now, Jenny could list several pages of 'what's wrong' and 'what's gotten into her'—starting, of course, with the move. Then she'd throw in her mom's whole denial crap just for giggles. But she didn't because if her mom hadn't figured it out yet, a list sure as hell wasn't going to help.

"Come on, let's go downstairs and wait. Your dad said he'll be here shortly." And like that, her mom forgot everything—their argument, that Jenny needed her 'attitude readjusted,' Jenny's snide comments about her dad and being happy.

As they waited in the 'foyer' (as her mom loving called what really was just a fancy living room), her mom prattled on about the Chargers and how she knew this time it'd stick for their family. And not only that, she was positive Jenny would make plenty of friends, would love living in Sunny View, and would never want to move.

"The only one who's going to be making friends is Dad," Jenny mumbled. Friends with different shades of lipstick.

"Did you say something, dear?"

Jenny tried not to vomit as her mom looked out the curtained windows from the living room for the tenth time (yes, even these curtains were handmade). But regardless of how long they waited, with her stupid trophy looming down at Jenny from the fireplace mantle, Dad remained a no-show.