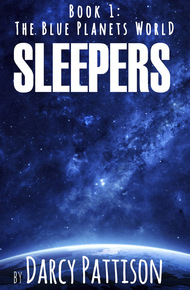 Jake Rose defianatly decides to skinny dip in the Gulf. He doesn't know that a Great White awaits. Will it be friend or foe?

A test-tube baby, fifteen-year-old Jake Rose is half human and half alien; he has both lungs and gills.

He's been raised on the "other blue planet," Rison. However, in a horrifying science-gone-wrong scenario, Rison will soon implode. He evacuates to Earth to live with his human father's parents on Bainbridge Island in Puget Sound. His mother, Dayexi Quad-de is Rison's ambassador to Earth. She's tasked with finding Risonians a new home on Earth in a peaceful manner.

If you like the intrigue and excitement of Ender's Game or I Am Number Four, you'll love Darcy Pattison's science fiction series of survival among the galaxies.

Are there aliens among us? Ever notice something rather curious about the people next door? Darcy Pattison's Sleepers imagines a world in which people from another planet desperately need a place to live and see Earth as a possible new home. But will the people of Earth trust them enough to share? – Nick Harlow

The Great White shark moved silently through the surf, propelled by short sweeps of its crescent tail. It had no conscious thought for what it was doing so close to shore. It just hunted. The water shone brilliantly under the Milky Way, and its myriads of stars reflected on the face of the gentle ocean swells.

A lone figure emerged from a dark beach house, trotted down the weathered boards across the dunes to the beach, scuffed through the soft sand and slowed to walk straight to the water's edge.

Wet sand under his feet now, Jake Rose threw a darting glare over his shoulders, and then turned to stare out to sea. He took a deep breath, letting the salty air fill his lungs, and suddenly the longing was overwhelming. I will go skinny dipping tonight.

Defiant, Jake removed his shirt, flip-flops, and swim trunks, tossing them beside a piece of driftwood. He splashed into the warm August surf until he was immersed chest-deep, and he scooped water to splash over his shoulders, his face, and his hair.

A hundred yards off shore, the shark heard the splash and stirred, moving toward the disturbance, an arrow spiraling towards a bull's-eye. The shark closed in, his dorsal fin cutting through the water less than a dozen feet to the teen's side.

At the sight, a shiver of fear ran down Jake's spine, but he was committed. Without stopping to think further, he bent his knees and dove, arms outstretched, splitting the glittering breaker.

Underwater, Jake's eyes adjusted to the dark. There it was, circling. The shark's row of teeth flickered, stark white in the gloom. Its circle collapsed inward until the shark darted past, just a few feet away from Jake's face.

Quickly, Jake inhaled, the gills under his arms undulating as they expanded and contracted with each breath. Water-breathing through his Risonian gills felt as natural and regular as breathing air through his human lungs. When he pressed his legs together, the villi wove together with what his father jokingly called a Velcro system that turned his legs into a long tail.

Jake swept his tail in a powerful thrust that sent him speeding away from the shark. But as he did, he felt a strange vibration in the water. Confused, he stopped and looked back at the Great White, who now held stationary just staring at Jake.

Perplexed, Jake waited for a repeat of the vibration. Nothing.

Had the vibration been an attempt at communication? he wondered. If he were home on Rison, there'd be no doubt. But here? On Earth? Clumsily, Jake flapped his hands, sending his own vibrations through the water.

With its short fins, the Great White beat out a series of vibrations in answer.

Crude, but effective, exulted Jake. They understood each other—after a fashion.

"Cousin," Jake called in a bubbly voice. "Before us is the open sea. Take me out to explore!"

The Great White didn't understand the words, of course. Nevertheless, he swam toward deeper water, pausing now and then, as if to be sure that Jake followed.

Jake reveled in the too-long-forbidden feel of warm seawater buoying him upward and the joy of a strong tail that sent him coursing behind the Great White. With wild abandon, Jake followed his guide. They were just two wild creatures off to explore the Gulf of Mexico.