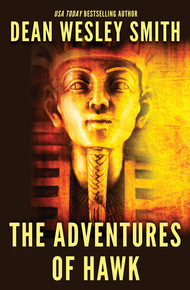 The Adventures of Hawk by Dean Wesley Smith

USA Today bestselling writer, Dean Wesley Smith takes us on a thrill-ride adventure in some of the world's most exotic places.

In search of his missing father, Danny Hawk must survive against all odds and a long way from home.

In 1970, Egypt breeds danger for Hawk and his friends. Hawk's only hope to find his father rests in staying alive and ahead of the dangerous men chasing him.

Sometimes only a half-step ahead.

From one of the country's most prolific writers and mentor to dozens of others, Dean Wesley Smith's Adventures of Hawk is an old fashioned Indiana Jones style treasure hunt… with life and death situations very much in the mix. Dean always gets you right into the story on page one…and once you start you can't put it down. – Nick Harlow

NINETEEN-YEAR-OLD Danny Hawk held his breath and tried to listen. He had moved to a position near an open window in the old palace-like building that housed the science department of the American University in Cairo. Outside the window was a concrete ledge six inches wide. He could move along that ledge, three floors above the ground, if he had to.

From what he could hear, two men were threatening Professor Davis in the outer office. The professor was pretending that he had no idea what the men wanted, even though Danny knew that was a lie. The men were after Danny's father's records, just as Danny was.

"He's not going to tell us," one man's voice said. "Kill him and search the place. They have to be here."

There was a sound of scuffling and then a muffled gunshot.

Danny managed not to gasp or make any noise at all, but he wanted to be sick. It wasn't possible that Professor Davis had just been killed.

He couldn't be dead.

Danny's entire body felt like it had turned to Jell-O, but with more noise from the outer office, he made himself move.

He climbed out the window and stood on the narrow ledge. Holding on to the rough wall as best he could, he pulled the window silently closed behind him. The only other exit out of that back office was through where the professor had just been killed, and Danny certainly wasn't going that way.

The late-evening Cairo air was hot and dry. A slight wind whipped at his loose pants and shirt as he stood with his back against the stone wall. His long black hair blew around his face as he edged inch-by-inch along the stone ledge. He had spent a lot of time climbing rocks back home in Idaho and he had no fear of heights.

But his life also hadn't been threatened in any of those climbing expeditions.

And none of them had been on the side of a building.

He forced himself to concentrate on what he was doing and try to not think about what had just happened inside.

The lights of the massive city of Cairo spread out in front of him. From the ledge, he had a good view over the palm trees and buildings, and in the distance, the Pyramids at Giza were lit up. There was so much light in the downtown area, he felt like there was a spotlight on him. The last thing he needed was to be seen from below and attention drawn to what he was doing.

The door slammed open to the back office and the men's voices got louder.

"Search it and make sure you don't miss anything."

Danny glanced back. Through the edge of the window, he caught a glimpse of a man with a red hood wearing the traditional Arab robe. Except for two eye-holes, his face was completely covered, but Danny caught a glimpse of one of the man's hands. His skin was so pale, he couldn't be Arab. And he had a tattoo on his hand that looked like something with a snake.

Danny glanced away from the window at his path of escape ahead. This wall of the American University Science Building was long, with evenly spaced windows along the ledge. He didn't dare try for the corner. That was too far, and would risk him being seen from either the men in the office or someone on the ground below.

Either would likely get him killed.

The next window to a dark office was locked. Danny glanced back. If one of the men happened to open the window and look outside, he would see Danny.

Danny stepped up onto the windowsill and pressed himself against the glass and the corner of the stone wall. He was a solid five-foot-eight, and people called him husky. But luckily, the windowsill opening was just barely deep enough so that he wouldn't be seen if one of the men looked his direction.

Now Danny just hoped no one below noticed him.

He kept himself perfectly still, using some of the techniques his Native American grandfather had taught him to stay calm.

Over and over, Danny did that, keeping himself pressed against the ledge and the glass, breathing as he had been taught.

I'm invisible. No one can see me.

Danny had never been so afraid in all his life.

His father had gone missing a month earlier, and now Professor Davis was killed because of Danny's father's notebooks.

What had his father found that had caused so much trouble?

Why did these men want that work?

Why was it so valuable?

And what was in the notebooks?

Danny had no answers to any of those questions. The last couple of years, his father had been gone so much, they hadn't talked.

But whatever it was in those notebooks to make them so valuable, if Danny wasn't careful, he would be killed as well for it, before he had any chance to find out what was going on, or what had happened to his father.

His mother insisted that his father was still alive, that she would know in her heart, in her very soul, if he had been killed. And Danny trusted that special connection. His father was being held somewhere. Maybe close by in this very city, as far as Danny knew.

That's why Danny, his best friend, Craig, and his Uncle Steve were in Cairo. The authorities didn't seem to care what had happened to Danny's father, so now he had to go in search.

Danny had expected that his father's notebooks, left with Professor Davis days before his father disappeared, might give him a clue to what had happened.

He never expected the notebooks themselves to get someone killed.

Finally, he heard a clear voice from Professor Davis's office. "There's nothing here."

"Wipe up the blood," another voice said. "Wrap the professor in his rug. We'll haul him with us and make sure his body is very lost in the desert."

The sound of movement echoed out over the night, then one of the men asked the other.

"We trail Hawk's kid," the voice said. "He'll lead us right to the notebooks. His father must have told him where they were. Of that, I'm sure."

Danny was startled at the mention of him. How did these killers know he was in Cairo?

He forced himself to stay perfectly still, to breathe regularly. The last thing he needed at this point, on this ledge, was to panic.

"The kid's here in Cairo?" the other man asked.

"Yeah, he flew in this morning with a friend and Professor Hawk's brother. No reason for them to be here except to find the professor and get his notebooks. Those three will be easy pickings."

Whoever those two men were, they had just confirmed that they were after his father's notebooks. And they knew that Craig and Uncle Steve had come with him to Cairo.

The other man laughed. "Yeah, who knows, we might not have to even kill the three of them."

"Don't count on it," the man in charge said.