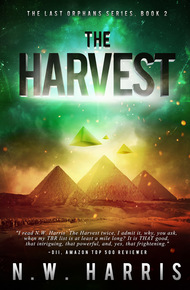 The Harvest - The Last Orphans Series Book 2 by N.W. Harris

In the wake of the apocalypse, nobody is safe.

Shane Tucker and his friends thought they managed to save the world from the destructive machine that killed off most of its adult population. Unfortunately, a war nobody was prepared for has only just begun. Now they find themselves joining ranks with a secret organization that will train them to fight for the right to survive. Taking refuge alongside other teenage survivors in a hidden base set deep within the mountains, they will learn how to repel an imminent attack by an ancient race of aliens.

Determined to safeguard the children under their charge, Shane and his friends compete for the ultimate prize—a suicide mission against the flagship of the alien fleet. While Shane's feelings for Kelly deepen, along with his need to protect her, he finds emotions clouding his judgment. He'll gladly die for her. But he refuses to die with her. No amount of training can prepare them for what is to come. Everything the brave teenagers have endured thus far will be eclipsed, with the freedom of humanity hanging in the balance.

The Harvest is the heart-pumping sequel to The Last Orphans by N.W. Harris.

"I got a bad feeling about this place," Joey said.

"Bloody hell!" Ben, the shortest of the Aussie boys, had a horrified expression on his face, his green eyes so wide they looked like they might pop out of his head. "Over there, where the street bends."

She swung her rifle in the direction he pointed.

"Are those bodies?" Ethan asked with a hoarse voice, though they all could see that they were.

Several hundred yards away, at a turn in the street where the sidewalks narrowed and the charred buildings drew closer, the road was blocked by what appeared to be a giant curtain. Hanging on a cable that ran across the lanes and the grassy divider, it hung from the two buildings' roofs to the ground and spanned the width of the boulevard. The yarn for this enormous curtain was the rotting bodies of the adults. Connected at their wrists and ankles such that each corpse formed an X, they created a pattern not unlike a chain-link fence.

"Who would do such a thing?" Ben's voice was pitched.

Kelly broke free of her catatonia, swallowed the bile that had risen in the back of her throat, and looked at the others. Their faces were slack and starved for blood, their wide eyes glued to the human curtain."