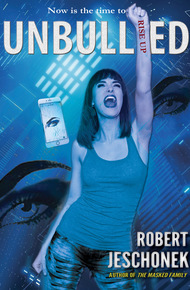 Sixteen-year-old Charlie West has nowhere left to turn. A cyberstalker named Conscience has made her life a nightmare, bullying her by remote control. But in Charlie's darkest hour, she discovers Nil, a radical underground movement using guerilla tactics to crush the worst bullies around. Charlie joins Nil and works high-risk missions, taking down bullies while playing a deadly cat-and-mouse game with her stalker. But when a trusted ally betrays Nil from within, Charlie must stand alone against Conscience...and her high-stakes war against the ultimate bully might just force her to make the ultimate sacrifice. Don't miss this story by award-winning young adult writer Robert Jeschonek, a master of unique and unexpected books that really pack a punch.

I first read Bob Jeschonek's work in a Star Trek short story anthology and was captured by his incredible imagination. Unbullied has one of the more clever plots you'll ever read; and if you love stories where the good guys don't get mad but get even, this is the book for you. – Nick Harlow

In one smooth series of movements, the twelve cheerleaders in their red and white uniforms rearranged themselves from a single line to a pyramid. With nimble grace, one blonde girl climbed to the top and stood tall on the backs of her teammates, beaming and shaking her pompoms.

The crowd of students packing the stands clapped and roared. Every last one of them wore a red t-shirt with the words "BULLYING IS BULL" on the chest. Below the words, there was an image of a black circle with a clenched fist in the middle and a black bar slashing through the circle overtop it.

As the cheerleader at the peak of the pyramid did a backflip, the applauding students leaped to their feet...all except one slim, dark-haired 11th-grade girl sitting in the middle of the bleachers. Her name was Charlie West.

Her eyes were huge and her heart was pounding because the cell phone in the pocket of her bluejeans had just vibrated twice, signaling the arrival of a text message.

And the chances were good that it wasn't any kind of text she wanted to read. They never were, these days.

"Yeah!" As the phone vibrated again, Principal Paul Kafka marched across the gym floor in front of the cheerleaders, shouting into a white megaphone. "That's how we roll in Papon Valley, right? No more bullying!" He shook his fist in the air when he said it.

The crowd repeated his words and stomped on the risers for emphasis. "No more bullying!"

"Not in our school!" shouted Kafka.

"Not in our school!" said the crowd.

Nobody seemed to notice or care that Charlie wasn't joining the chant. They were too caught up in the action, and Charlie was kind of a background person to begin with. People didn't pay a lot of attention to her, especially these days, when she tended to fade into her own distractions.

Like the vibrating phone in her pocket and the person who was undoubtedly texting her. The one who was making her life a little more of a living hell every day.

She wanted to ignore the phone, forget about her tormentor for a while...but she knew she had to deal with him. She had no choice, considering what was at stake. Considering who was at stake.

Sliding her hand into her pocket, she pulled out the phone. She slipped deeper into the nightmare her world had become.

Even as Principal Kafka paced the floor and shouted down below. "People tell me you can't have a school without bullying! They say you can't fight it!" He shrugged out of his suit jacket as he paced. "Do you know what I tell them? Bull!" Dramatically, he whipped the jacket across the floor. "Bullying is bull!"

"Bullying is bull!" repeated the crowd.

"Because when you've got good people like we've got here," said Kafka, "and they're all committed to a zero tolerance for bullying policy, you can't help but win!"

The crowd roared and stomped. No one seemed to be paying the slightest bit of attention to Charlie.

She kept her phone out of sight the best she could anyway, holding it down at her side against her hip. Cell phones were banned in class and at assemblies, so if someone was watching and ratted her out, she could really get busted.

When the crowd cheered again, Charlie turned her hand so the phone was face-up and glanced at its screen. Immediately, her eyes widened and her heart beat faster.

Because she'd been right. It was him again...or her. She thought of her tormentor as a male, but the truth was, Charlie had never seen him, and he'd never identified his gender. He could just as easily have been a female, not that it mattered.

Because it was the same person, the one she'd expected. The name at the top of the screen was the same as always.

And below it was another in a long line of terrible messages. In fact, it was the worst one yet.

SCORCHED EARTH ROUND! it read. UR FAMILY DIES IN 15 MIN IF YOU ARENT HOME TO SAVE THEM!!!!

Charlie's stomach wrenched. Her eyes shot to the time stamp under the message: 9:05 AM.

Somehow, she had to get home by 9:20. Because there wasn't a doubt in her mind that Conscience would do it. He was perfectly capable of causing someone's death.

Charlie knew this because he'd done it before.

She didn't hesitate. Shooting to her feet, she pushed her way through the crowd, working her way down the stands. The whole time, she kept her hand over her mouth and looked like she was sick enough to throw up at any moment. Which actually wasn't much of a stretch; her gut was churning at the thought of what Conscience might do.

Fueled by blind panic, Charlie burst free of the stands and hit the floor running. Teachers in "Bullying Is Bull" t-shirts stood along the foul line in front of the bleachers, some frowning with concern at her as she charged past, but none of them moved to stop her.

Then, Charlie bolted around the corner of the stands, aiming for the exit, and ran right into Vice Principal Kurt Driscoll.

"Whoa there." He caught her by the shoulders and tipped her back to meet his gaze. "Where's the fire?"

Charlie kept her hand clamped over her mouth as she looked up at him. "Sick!" She sucked in her breath like she was gagging, trying to convince him.

Driscoll's deep, dark eyes warmed with worry. "Come on, then. I'll get you to the nurse's office."

Charlie shook her head hard. Driscoll was a great guy, she liked him a lot, but the clock in the back of her head was spinning like a propeller on a plane in flight. "No time!"

She took a chance then and bucked left, breaking his grip. Before he could say another word, she sprinted away from him through the open doors.

Behind her, Principal Kafka was still shouting through his megaphone. "How do we roll, Papon Valley?"

"Bullying is bull!" roared the crowd. "Not in our school!"