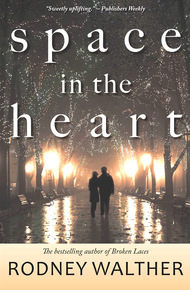 Rodney Walther is the award-winning author of two bestselling novels (BROKEN LACES and SPACE IN THE HEART), emotional stories that weave together themes of regret, grief, and parenthood.

In his debut novel, BROKEN LACES, Walther merged the passions of managing baseball and of writing into a new endeavour, telling the touching story of a man who loses it all and then must discover how to become a better father . . . and a better man.

In SPACE IN THE HEART, he tells the story of an overprotective father who blames himself for a family tragedy, a wheelchair-bound teenage daughter who yearns for independence, and a vibrant newscaster who wants more than makeup and mirrors—all three characters connected by a shared history.

His upcoming novel, WHAT REMAINS BEHIND, is another domestic drama that delves into the themes of grief and regret, of forgiveness and second chances. It's the story of a struggling single mom who accidentally kills two people in an unwitnessed car crash after inadvertently taking a powerful medication. Without planning to, she then falls in love with their surviving son, a former soldier who suffers from PTSD. The problem? She knows the truth about his parents' deaths. He doesn't.

When not writing, Rodney spends his time working as a business analyst, driving a tractor around his ranch, or playing peekaboo with his grandson.

Space in the Heart by Rodney Walther

Before his wife was murdered, astronaut Garrison Sterling couldn't wait to rocket into space on his first shuttle mission. Now he merely survives, one day at a time, blaming himself for the events that put his wife in a grave and his daughter Zoey in a wheelchair. And he struggles to raise Zoey, a headstrong teenager who longs for independence and rebels against his overprotective ways.

Danica Cortez, Houston's favorite morning news anchor, dreams of practicing real journalism instead of forever reading teleprompters. When she witnesses a plane crash and rescues the only survivor—a U.S. Senator—Danica becomes a national hero. But her journalistic instincts tell her that there is more to the story, leading her not only to confront a powerful politician but also to face the greatest regret of her past, her role in the tragic story that launched her career.

When Garrison and Danica meet, they sense an instant attraction. They take those tentative first steps toward love even as they wrestle with competing priorities: the needs of his daughter and the demands of her career.

Now their journey, like his planned spaceflight, might be over before it begins. Because a dark secret threatens to destroy their relationship. Forever.

This bundle needed a love story, and I immediately thought of Rodney Walther's Space in the Heart. This wonderful story explores the lives of a father and daughter seeking the same thing… but both have some serious obstacles to overcome. A terrific feel-good story with a great ending. – Nick Harlow

Zoey drummed her fingers on the arms of her wheelchair, willing the school bell to ring. "What if my dad says no?"

Cara Reynolds shook her head. "Why would he? It's just a sleepover. My mom will spread out air mattresses in the music room downstairs. We'll sleep there. Dad is setting up our new TV tonight. You're gonna be so impressed. It's ginormous."

Zoey thought about the television she had at home, probably four years old by now, and felt secretly jealous of Cara. Her best friend always had the latest gadgets, courtesy of a father who was a bigwig in the airline industry, and the cutest fashions, which her stay-at-home mom bought from the trendiest boutiques in Houston. "Your parents are so cool," Zoey said.

Cara made a sour face. "I can't stand them. All they do is argue."

"At least they let you do fun things. Not like my dad." As much as Zoey loved him, he absolutely drove her crazy with his overprotective attitude. And with her mom long gone, that meant her dad was on the job 24-7. My father and my smother.

The bell rang, followed immediately by the sound of chairs being pushed back, but Zoey knew better than to make a rush for it. There wasn't any need to get caught up in the crowd of kids running for buses or their parents' cars. Her ride would be there, waiting patiently for her . . . as he had every afternoon since her first day of kindergarten.

"Let's get outta here," Cara said. "I have to head home in a few minutes. Did I tell you my mom's picking up Maverick from the vet?"

Good grief. Zoey was getting tired of hearing about Cara's new Labradoodle. Her folks had bought the designer dog from some out-of-town breeder last week, and now they were finally bringing it home. Cara hadn't been able to shut up about it.

"Can you believe my folks paid three thousand bucks for a dog?"

"Wait. Seriously?" Zoey had been bugging her dad for years about getting a dog, either a service animal or just a friendly companion. She would have been happy with a two-dollar mutt from the shelter.

"Actually, it was my mom's idea. She and my dad had a big argument about how much he was spending on golf, and the next thing I know she was calling dog breeders." Cara slung her backpack over a shoulder and cruised right out of the classroom, while Zoey had to push hard just to keep up. Cara laughed. "Hurry up, slowpoke. I need you to run interference for me."

They entered the hallway, and Zoey wheeled around a bunch of students to get in front of her friend. She used to watch reruns of Saved by the Bell and Boy Meets World and had wanted to believe those shows portrayed typical school life. But her suburban middle school was no sitcom. Sure, there were the jocks and the brainiacs and the band geeks—that was her—but her middle-school caste system was more layered than that. It consisted of an entire continuum that ran from the Populars to the Invisibles.

And for a girl in a wheelchair? Well, there was a special category for her.