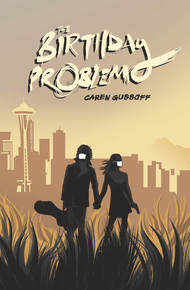 Born in New York, she attended the University of Colorado, the School of the Art Institute of Chicago, Clarion West (as the Carl Brandon Society's Octavia Butler scholar) and the Launchpad Astronomy Workshop. Her books include Homecoming (2000), The Wave and Other Stories (2002), The Birthday Problem (2014), and Three Songs for Roxy (2015). She's published more than fifty short stories, and authored the setting chapter of The Gotham Writer's Workshop Guide to Writing Fiction. Her latest novella is included in 2018's Dracula: Rise of the Beast from Rebellion Books.

Caren's awards include being the Village Voice's 2000 "Writer on the Verge," an Octavia E. Butler Scholarship from the Carl Brandon Society, and serving a brief stint as the Seattle Post Intelligencer's "Geek of the Week."

The Birthday Problem was supported by awards from The Speculative Literature Foundation Gulliver Grant, the Elizabeth Geoge Foundation Hedgebrook Award, and the SYBHEL consortium, sponsored by the European Commission's Science & Society Program.

The Birthday Problem by Caren Gussoff

In the year 2060, the next plague has arrived. MaGo bots, the nanotechnology used for everything from fighting the common cold to radical life extension, have begun to malfunction, latching onto the brain's acetylcholine receptors to cause a permanent state of delirium. The effects are devastating.

THE BIRTHDAY PROBLEM follows four Seattle survivors and how their lives irrevocably intersect: Chaaya Gopal Lee, great-granddaughter of the MaGo programmer, whom the pandemic turns into a killer; 40-something ex-rock star and pharmacy technician Greystone Toussaint, the "King of Seattle"; Alastair Gomez-Larsen, forced to become a blood-smuggler to treat his father's liver disease; and Didi VanNess, a lovesick former-WNBA center and CNA, who tries to win back her wife's heart against a backdrop of madness, death and 30 cats, all named Ira. Exploring themes of perception, probability, and redemption, THE BIRTHDAY PROBLEM is told from multiple points-of-view, moving back and forth in time, as the characters struggle to find their places in a – literally – mad world.

Caren Gussoff's The Birthday Problem is set in a near-future Seattle where a nannite plague has overtaken the world. It deals with issues of connection and mathematics in a multiple point of view narrative that showcases her ability with evocative, illuminating prose, and contains figures like former-WNBA center Didi VanNess and The King of Seattle, an ex-rockstar now living in one of Seattle's iconic landmarks, as well as thirty cats named Ira. – Cat Rambo

Toussaint placed her — like a doll in his big, rough hands — onto the rose damask fainting couch. Chaaya dug her face into the couch, rubbing the upholstery across her cheek. It felt like a beard.

She felt something warm on her face; he was holding a mug of something to her. "It's coffee," he explained. "With sugar."

"It's actually more sugar than coffee," he explained, as if an apology was necessary. Toussaint held the coffee cup up for her, and politely looked away as he nudged up her mask. He'd seen her lips before. She'd seen his. It was strange that he was being polite. She thought she must look terrible. The coffee was lukewarm, weakly smoky, powdery and wet. But it was sweet. He fed her sips and she lapped at it like a kitten.

Revival came in a rush. The sugar hit her bloodstream and she was in the moment. Aware, like a great camera shifting into focus, fast forward. Her thoughts were clear and solid and entire, one after another. She tried to speak, but everything wanted to come out of her all at once: Girl, body, girl, killed, you, shot, girl. Instead, nothing came out. Her voice had been strange; now it was gone.

Toussaint held out a plate to her. They were Nani's ornately painted holiday plates. They used them only for special occasions and company. Heaped on the plate were chunks of cut-up fruit, striped dark green and lime and orange.

"Tomatoes. They're OK," he said. He balanced the plate on her lap. "I ate two earlier and I'm OK."

She didn't care. She shoved the slices in her mouth, into her cheeks, as quickly as she could. Her mask was wet again, with tomato seeds. She didn't care. She tasted salt. Pepper, maybe. Fruit glucose. She tried to make herself slow down and chew. Her blood hummed like the electricity in the walls. Her leg bobbed up and down.

"Jesus," he said. "That's better. You've got some color again." He sat back down on the floor and held a packet out to her. "You need a seeding, badly. Don't you?" He wasn't really waiting for an answer. "I'll prep some for you. Where's Nani?"