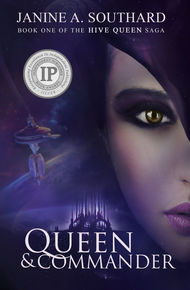 Queen & Commander by Janine A. Southard

"Anywhere but here" has its drawbacks.

On a world where test scores determine your future, six rebels refuse to play the game. They'll outrun society as fast as their questionably obtained spaceship will take them. Rhiannon, the inexperienced Queen leading this escape, will have to deal with blackmail by a supposed ally and kidnapping by people who should be role models in her quest to keep her crew alive.

Come for the space adventure, stay for the families of choice.

Janine Southard's Hive and Queen is very familiar to me because I was its editor. I love this start to a young adult series that skews gender roles and expectations of relationships in a way that is original and thought-provoking. It's independently published and a great example of material published via crowd-funding. – Cat Rambo

Does anyone know how to pilot a spaceship? Preferably without turning off the artificial gravity.

A beep informed him that someone was calling up to the pilot house. Let's take a break from this fruitless searching. When he recognized the caller, he groaned.

Their politician passenger blinked beady eyes and declared in strident tones, "You will put me through to your captain at once, young man. This is unacceptable. Unacceptable!"

I can make it worse. Luciano figured he shouldn't bait the passenger. "I'm terribly sorry for any inconvenience. Commander Ceridwen isn't here at the moment. May I take a message?"

The politician's face flushed crimson, starting at his mouth. "Now, look here, young man!" He leaned in, peering intently at the panels behind Luciano. "Are you the pilot?"

Luciano pasted on his blandest smile. He didn't even grit his teeth. "Yes. How can I help you?"

"Help me? How can you help me?" The incredulity in the passenger's voice could have been better disguised. Though that probably wasn't the point. "When was the last time your pilot's license was updated? I plan to write a strongly worded letter to your issuing institution, young man!" He was panting.

The institution of Read-The-Manual University will be happy to ignore your complaints, sir.

The passenger's breathing sped up into a frothy puffing. "Is this how you treat all official envoys?"

Luciano shrugged, enjoying the way it made the man's eyes even wilder. "You're my first."

"First? First!" The man spluttered for a few moments before cutting the connection on his end.

Luciano bet the passenger would turn puce when he looked for his pilot's license. Still, it was good that he'd called. It had reminded Luciano that he could call for help too. This Hive may have zero pilots, but it has three engineers! One of them should be able to do something about this unfortunate gravity situation, or at least absolve Luciano's guilt over causing it.