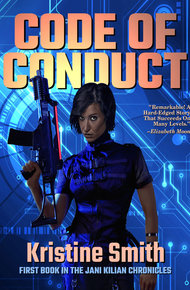 Code of Conduct by Kristine Smith

Captain Jani Kilian's life should have ended in front of a firing squad. Instead, she evaded battlefield justice by dying in a transport crash. End of story, according to official Commonwealth Service records. But doctors repaired her in secret, using the most advanced Service Medical technologies available, or so they assured her. In the last days of the idomeni civil war, she escaped their homeworld of Shera, and spent the next 18 years on the run.

But someone like Jani leaves a trail no matter how hard they try to hide it, and she soon learns the Service hunt for her never ended. When Interior Minister Evan van Reuter, her former lover, tracks her down and begs her help in finding his wife's killer, she has no choice but to agree. The search takes her to the Commonwealth capital of Chicago, a hotbed of political intrigue as dangerous as any warzone. As the danger mounts, so do Jani's struggles. Her rebuilt body is breaking down, and memories long suppressed are flooding back. Of one horrible night 18 years ago, and the gut-wrenching decision that changed her life forever.

Kristine Smith is working in military sf and doing it with panache and grace in the Jani Kilian series. Tight and fast, Code of Conductwill pull you into one of my favorite series, with a set of characters and fascinating worldbuilding that will leave you scrambling to find the next volume in this five book series. – Cat Rambo

The rain had turned to mist. Time to head back to the Association tracking station she called home. Jani hurried in the direction of the lot where her skimmer sat charging, picking up her pace even though her back had begun to ache. Her bosses would soon be screaming for official morning docking numbers. She couldn't afford to piss them off anymore.

A shout sounded from behind. The pound of running feet. Jani's heart raced. Her breath caught in her throat. Then chill calm washed over her, like an old friend resting a hand on her shoulder. She reached into the inner pocket of her duffel. Her hand closed around the grip of her old Service shooter. She wheeled, only to see the desk clerk from the hostel racing toward her.

"Jeez, Cory, wake up!" The young man slowed to a gasping halt. "I need–to talk to you."

Jani withdrew her empty hand from the duffel and tried to smile.

"Boy, you look wrecked." His voice dropped to a whisper. "You get those old farts you work for through that audit ok?"

The clerk rolled his eyes. "You, dummy! You're the talk of the Merchants', my manager says. All the paper you vet is so clean, it squeaks. Six months on the job, not one observation from Guv Hall. My manager calls it a miracle."

My bosses call it something else. Jani's smile faded. The word "verifier" hadn't been said aloud at this morning's meeting, but the mute accusation had hung heavy in the air. Government spy. They think I'm a government spy.

If they only knew.

Jani glanced down the street, where the crowd still gathered in front of the communications shop. "I'll think about it."

I know all about the Registry, child–my name resides in a very prominent place in that epic tome. "Thanks for the word," Jani said. "I'll give it all due consideration." She left the clerk to argue with her retreating back and ducked into the alley she always used to reach the charge lot. Then her stomach grumbled and she tried to recall what waited at home in her cooler. Cold air–damn, I need to buy food. And all the decent shops were in the opposite direction.

Jani hurried out of the alley, slid to a stop, and scurried back into the shelter of a doorway. The desk clerk was talking to an attractive blonde. His new contact from SouthPort Consolidated, Jani assumed. Try as she might, she couldn't recall seeing that company name on any shipping logs that had passed through her hands.

Jani studied the woman's neat hair and stylish clothes, both several GateWays removed from the best SouthPort had to offer. She watched as the desk clerk nodded, then pointed in the direction of the alley.

She backed down the passageway, her sore back protesting every stride. When she reached the other end, she looked up and down the street, ducking into the shadows as a passenger skimmer drifted by. She listened, until she heard only faraway street sounds and knew for certain that she was alone. Then she ran.