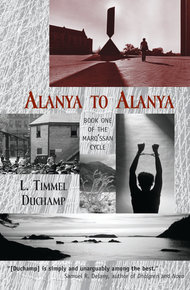 L. Timmel Duchamp is the author of the five-volume Marq'ssan Cycle, which won a special Tiptree Award honor in 2009, and the founder and publisher of Aqueduct Press. She has published two collections of short fiction: Love's Body, Dancing in Time (2004), which was shortlisted for the Tiptree and includes the Sturgeon-finalist story "Dance at the Edge," the Sidewise Award-nominated "The Heloise Archive," and the Titpree-shortlisted "The Apprenticeship of Isabetta di Pietro Cavazzi"; and Never at Home, which includes a 2011 Tiptree-Honor List story, and co-author, with Maureen McHugh, of a mini-collection, Plugged In, published in conjunction with the authors' being GoHs at WisCon. Her Marq'ssan Cycle consists of Alanya to Alanya (2005), Renegade (2006), Tsunami (2007), Blood in the Fruit (2007), and Stretto (2008). Her novel The Waterdancer's World appeared in 2016, and the short novel, The Red Rose Rages (Bleeding) appeared in 2005; she has also published the novella De Secretis Mulierum and dozens more short stories and novellas, including "Motherhood, Etc" (short-listed for the Tiptree) and "Living Trust" (Nebula and Homer Award finalist). In addition to her fiction, she has published a good deal of nonfiction. Since 2011 she has been the Features Editor of The Cascadia Subduction Zone. She was also the editor of Talking Back: Epistolary Fantasies (Aqueduct, 2006), The WisCon Chronicles, Vol. 1 (Aqueduct, 2007), Narrative Power: Encounters, Celebrations, Struggles (Aqueduct Press, 2010), Missing Links and Secret Histories: A Selection of Wikipedia Entries from across the Known Multiverse (Aqueduct Press, 2013), and co-editor, with Eileen Gunn, of The WisCon Chronicles, Vol. 2: Provocative essays on feminism, race, revolution, and the future (Aqueduct, 2008). Her latest novel, Chercher La Femme is forthcoming in 2018.

In 2008 she appeared as a Guest of Honor at WisCon. In 2009-2010 she was awarded the Neil Clark Special Achievement Award ("recognizing individuals who are proactive behind the scenes but whose efforts often don't receive the measure of public recognition they deserve"). In 2015 she was the Editor Guest at Armadillocon. She has taught at the Clarion West Writers Workshop and has taught one-day Clarion West workshops. She has twice been nominated for the World Fantasy Award. She lives in Seattle.

Seattle, February 2076. The Marq'ssan bring business as usual to a screeching halt all over the world, and Professor Kay Zeldin joins Robert Sedgewick, US Chief of Security Services, in his war against the invaders. Soon Kay is making rather than writing history. But as she goes head-to-head against the Marq'ssan, the long-buried secrets of her past resurface, and her conflicts with Sedgewick and Security Services multiply. She faces terrifying choices. Her worldview—her very grip on reality—is turned inside out. Whose side is she really on? And how far will she go in serving that side?

L. Timmel DuChamp's Alanya to Alanya is the first volume of her Marq'ssan cycle. Like the Gussoff book, it's set in a near future Seattle and world that has become fiercely divided by gender, visited by aliens with very different ideas about such things. Political and intricate, this book pulls no punches in setting up a world that echoes that of The Handmaid's Tale while remaining a unique vision. DuChamp is also a literary scholar and publisher; her Aqueduct Press is publishing great stuff. – Cat Rambo