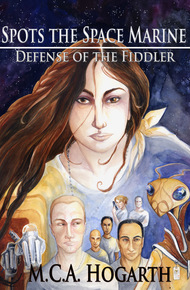 Pollyanna meets Starship Troopers in this fast, screenplay-like novel about a 30-something Marine private called out of retirement to join the war against the crabs. But shattered morale is the least of her company's problems, and their survival may hinge on an unlikely friendship forged between an alien weapons designer and a mother-turned-warrior….

M.C.A. Hogarth's Spots the Space Marine features a military heroine who's also a parent in a book that has aptly been called "Pollyanna meets Starship Troopers". If you're not familiar with Hogarth's work, I urge you to check it out. If you're a fan of furry fiction, you'll particularly enjoy her Pelted Universe works, but another favorite of mine is Black Blossom. – Cat Rambo

Armory. A narrow room of lockers, racked power and ammo cells, and suits in frames, terminating in an airlock.

Spots. "Are you sure we should be here this early?"

Claws. "Relax. Everyone checks their equipment before goin' out. Hairball and Whiskers were probably just here."

Spots. "If they were just here, doesn't that mean the equipment's already been checked?"

Claws grabs Spots and pulls her behind an equipment locker as the door to the darkened armory opens. Two armed guards step through and take position beside the door. Then a thin, tall silhouette ducks to enter, and the smell of thyme and spice fills the air.

Spots dashes out and almost into a nine-foot-tall alien resembling a streamlined praying mantis. It has a wedge-shaped head with large, multifaceted eyes and two backswept antenna. It has three pairs of arms: the topmost ending in long hand-like appendages, the middle sporting a set of scythe-like pincers with serrated edges, and a vestigial set near the joint of the thorax and abdomen. Its carapace is painted in fluorescent designs along its back, sides and up around six spiracles arranged in vertical rows on the thorax, three to a side.

It sees Spots, pauses, then "speaks" through these holes, a breathy, song-like sound. The vestigial arms glide together to add a counterpoint.

Alien. "Pardon, have we intruded?"

Alien. "Ah! We also came for this purpose."

Claws hisses her name from the corner. She ignores him.

Alien. "Yes. We make a visual inspection and take data daily. This allows us to design better technology for your use."

Spots, wide-eyed. "Oh! You... you were one of the Violinists who gave us the technology?"

The alien approximates a bow. "We have that memory, yes."

Alien. "We are glad you approve, Mother."

Alien. "Your body has the scent-memory of milk and blood. We have learned to associate this with mammalian mothers. You are here to inspect our work?"

Alien. "Pardon us. Did you say you are going out? You mean in our work?"

"You, a mother?" The lower arms make a somehow distressed trill. "We did not know our work would be used for such important purposes."

Spots reaches to touch but thinks better of it. "It has served very well so far."

Alien. "We are glad to hear it." A pause. "You wished to know our lineage?"

Alien, lifting an upper arm. "To smell the paint. It speaks of our lineage and its accomplishments."

The alien extends its middle arm. Spots eyes the blade-like pincer and reaches over to sniff hesitantly at the fluorescent paint.

Alien. "It is no surprise. Humans do not appear to have good talent in that way."

Spots. "Maybe you could explain it to me?" Claws starts to say something. "Uh... another day, when it's convenient."

Alien. "We would be honored, Mother-soldier. We have been named Samuel-Colt by the humans, if you wish to ask for us."

Claws inches around the locker, giving the alien a wide berth, and follows Spots out. In the corridor...

Claws. "Are you crazy? Talking to one of the fiddlers?"

Spots. "What's wrong with talking to them? They're our allies."

Claws. "Haven't you noticed they kind of look like the crabs we're fighting? They've admitted the crabs are from their planet."

Spots. "They also gave us the technology we use to kill them, Claws."

Claws. "You're way too trusting, Spots." Claws squints at her, leans over and snaps fingers in front of her face. "Hello! Earth to Spots, come in, Spots!"

Spots. "Sorry. I was just wondering why he kept saying 'we' all the time. Do you think he'd explain if I asked him later?"

Claws. "There ain't gonna be a later!"

Spots. "I guess you're right." Wistful. "I would have liked to have known."