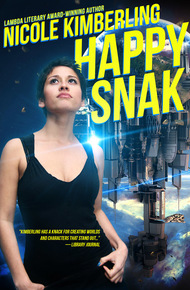 Nicole Kimberling is a novelist and the senior editor at Blind Eye Books. Her first novel,Turnskin, won the Lambda Literary Award. Other works include theBellingham Mystery Series, set in the Washington town where she resides with her wife of thirty years as well as an ongoing cooking column forLady Churchill's Rosebud Wristlet. She is also the creator and writer of "Lauren Proves Magic is Real!" a serial fiction podcast, which explores the day-to-day case files of Special Agent Keith Curry, supernatural food inspector.

Gaia Jones is on A-Ki space station for one reason, and it's not to schmooze the hermaphroditic aliens. She's out to make a name for herself and her restaurant. Not an easy task in A-Ki's tightly controlled, rigidly separated society. But her business plan gets complicated when she rushes to the aid of a dying alien—and finds herself the unwilling guardian of a shunned alien ghost named Kenjan. And the new owner of Kenjan's servant, Wave Walker.

Then Kenjan's grieving lover, the powerful leader of the Kishocha, offers her a dream and a nightmare rolled into one: a brand new store with a strange double purpose—half snack bar, half shrine to his dead beloved. The catch? She must spend the rest of her life there, tending Kenjan the Heretic's ghost. Or the entire station will be destroyed.

Happy Snak by Nicole Kimberling is a fresh and funny romp detailing the travails of running a fast-food enterprise in space as unhappy proprietor Gaia Jones finds her life growing increasingly complicated. My only sorrow is that there isn't a sequel, because Happy Snacks is comfort food of the highest grade. – Cat Rambo

In the employee bathroom of the A-Ki Station Happy Snak, Gaia Jones brushed her teeth and pondered a mysterious odor. She took a deep gulp of recirculated air, tasted it and coughed. It wasn't good. The humidifier was turned up too high. And what was that chemical smell? She gagged on the acrid tang. At first, Gaia assumed the smell emanated from her toothpaste. Enhanced with arcane East Indian herbs and state-of-the-art calcium bonders, the toothpaste claimed to harness the powers of magic and science to dramatically increase the longevity of space-faring teeth. The toothpaste label depicted the god Shiva holding a red rocket with the word A-Ki stenciled on its side.

A-Ki Station looked nothing like a rocket. It hung, like a massive bowling ball, an interloper between the moons of Mars. The human sector looked tiny; just a circle of boxy towers adhered to a huge inscrutable orb. On Earth, humans were at the top of the intellectual pyramid. Out here humanity clung, wart-like, to the outside of the alien spaceship the size of a small moon.

Gaia spat out a wad of white foam and rinsed her toothbrush, confident that her teeth would endure forever, even if the rest of her was going to die of overwork—maybe today.

Daytime wouldn't begin for another twenty-five minutes, but Gaia liked to open early, to catch the shift-change customers. It was her one advantage over Treat Bonanza. Their labor union prohibited extended hours.

She ran a hand through her short, silky hair. Her face could be beautiful or ghastly depending on the light: high cheekbones, square jaw, full mouth. She wore no jewelry. Gaia shrugged into her yellow and blue Happy Snak smock. She liked the anonymity of a uniform. She liked its wide, deep pockets. The smock resisted flames and grease and repelled overly personal glances. The smock and Gaia resonated perfectly.

Again, Gaia considered the air. Should she get her respirator? Gaia couldn't remember her respirator's current location, or if it was charged. She found her hand-held.

"Find and charge respirator." She tapped the send icon. Then she remembered that her mother system and the hand-held refused to communicate. She sneezed. "Find out why the mother system won't talk to the hand-held. And ask the food court office about the air this morning once they're finally open."

She could call climate control instead, but they charged a fee for answering nonemergency calls. Gaia didn't know how much the fee was, but knew she didn't want to pay it.

Had she become too much of a cheapskate? The manager of Treat Bonanza probably would have called, but he didn't share Gaia's values. He didn't care about serving a few extra customers who just got off the graveyard shift. He had a private shower and toilet. He didn't have to share soap with corps-enlisted women and the maintenance crew. The manager of Treat Bonanza didn't have to personally pay all the bills either. No, she decided, she wasn't a cheapskate, just fiscally responsible. She was, as the many sales brochures she received called her, today's entrepreneurial woman.