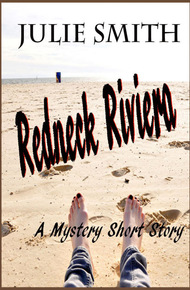 Julie Smith is the author of more than twenty mysteries, most set in New Orleans and starring one or the other of her detective heroes, a cop named Skip Langdon, and a PI named Talba Wallis. (Both female, both tough and wily.) She also has two series set in San Francisco.

Last year, for the first time in twelve years, she wrote a book, a new entry in the Skip Langdon series. Look (online of course!) this March For MURDER ON MAGAZINE.

ROY AND FOREST THOUGHT THEY WERE PRETTY SMART CON ARTISTS—UNTIL THEY MET HEIDI…IF THAT WAS EVEN HER NAME.

.Meet Forest and Roy, a couple of Clueless Clydes right out of Elmore Leonard—that is, if Leonard's lowlifes lost about half their IQ points. But you've got to hand it to them—they're not short of ambition, just gray matter.   In these three short stories (one very short) they make elaborate plans to knock over an entire vacation town; in a separate caper, relieve a fellow crime partner of two million dollars; and in a third, take down an old rival.   Speaking of partners in crime (not to mention rivals), enter Heidi, aka the Dutch Treat and in Forest's opinion, the unparalleled Queen of Crime. What the resident geniuses lack in brains,Heidi supplies. No one can plan a caper like Heidi can, and no one's sexier, smoother, or more slippery. The perfect crime partner except for one thing— no would-be crime czar is ever safe with her.

These stories are all about their setting—well, that and the convivial characters. The lazy, boozy, druggy, sunny piece of real estate so aptly nicknamed the Redneck Riviera just seems like the best place in the world outside of San Pedro Sula to commit a crime. Its commitment to not doing a whole lot, but doing so while drunk or high, is a perfect set-up for that idle-hands-devil's workshop thing. And privides the perfect hangout for clever femmes fatales looking for easy scores.

Julie Smith is the author of twenty novels and as many short stories. She's a former reporter for the New Orleans Times-Picayune and San Francisco Chronicle, as well as a veteran of her own online writing school, plus an editorial service she founded with two other writers. She's also taught writing at the University of New Orleans and in numerous private seminars. During her long career as a novelist, she has created four mystery series, including two set in New Orleans where she lives, featuring homicide detective Skip Langdon and poet/P.I. Talba Wallis. In 1991, she won the Mystery Writers of America's prestigious EDGAR ALLAN POE AWARD for Best Novel. – O'Neil De Noux

They popped him in Alabama that last time, and the first thing Forest did when he got out— after he got drunk and laid— was call his buddy Roy. Roy was out in East Jesus, Florida this time— Forest didn't quite know where, but it didn't make much of a damn. It was somewhere to go.

Roy was so tickled to hear from him, he hollered at the phone like it was Forest himself. "Hey, ol' buddy. Get your ass on over here. Where the hell are you, anyhow?"

"Well, that's almost a straight shot— you ever been to the Redneck Riviera?"

"Not in a while." Not in quite a while— so long he'd forgotten what a depressing hole it was. Panama City, anyhow. Miles and miles and miles of McDonald's and Burger Kings and Taco Bells before you ever even got to the goddamn beach, and once you were there, the whole damn coast was lined with tattered motels looking like they were built twenty or thirty years ago by fly-by-night contractors using substandard materials and hadn't been touched since.

It was ten o' clock in the morning and here he was drinking beer with Roy, who still looked like the Kennedy kid who went down in his own plane. Forest was your average, everyday peckerwood and knew it— beer belly, blondish hair, a face that got red, and a neck that got sweaty. He liked hanging with Roy; it made women friendlier.

They were slugging down Buds in some pathetic bar done up in that unpainted wood and fake fishnet style that was so old and tired you couldn't even remember the time before it came in. It smelled of Pine Sol and spilt beer. The bartender was a girl from Waycross, Georgia, who kept stealing looks at Roy. She didn't hardly look old enough to drink herself, and she had her hair bleached out so bad it looked like albino wire. The place didn't even have a jukebox.

Forest said, "Man, this place has gone downhill," meaning not the bar, but the whole damn coast.

Roy got it right away, but he begged to disagree.

"Mmm-mmm. No. 'S better. Plenty of casinos now. Ever been to Destin? Pretty as ever. And now we got Seaside."

"Seaside? What the hell's Seaside?"

"Oh— Seaside; man, Seaside! Seaside's like Alice in Wonderland. One minute you're mindin' your own business, the next minute you're down a rabbit hole. You follow the yellow brick road and like, there it is… the Emerald City. Seaside's like... " For once Roy seemed at a loss for words. "It's like a mirage." His face took on a dopey look. "Rancho Mirage-O, man."

"Well, now," Forest said. "I wonder if you could be a little more specific."

But he might as well have saved his breath. Roy was on a roll. "What you got here, I mean right here, you got this pitiful, fallin' down, tacky, let's-get-drunk-and-pretend, trailer trash vacation hell. Am I right?"

"You couldn't hardly be more right."

"And then five minutes down the road, I swear to the good Lord not a second more, you got the Costa Richa."