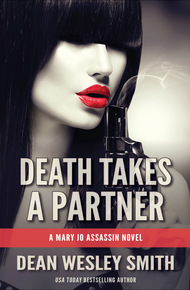 Mary Jo, one of the most beautiful and deadly assassins in all history, loves drinking vodka and orange juice after a job well done.

She planned her next kill perfectly. Every detail thought through.

But Mary Jo never planned on meeting Jean, the beautiful woman two houses down the street.

A twisted story of love, killing, and drinking, not necessarily in that order.

Dean Wesley Smith is one of the most prolific writers working in modern fiction, publishing over a hundred novels in forty years, and hundreds of short stories across many genres. I know him as a friend and man of many talents, writer, editor, publisher, teacher. He and wife Kristine Katherine Rusch are the hardest working writers I know. Deans gives us Death Takes a Diamond, where a contract comes in on another assassin, Mary Jo must discover why. Assassins don't kill assassins. With four ancient-order assassins working together, anything becomes possible. Sex, murder, and diamonds. And pretty much in that order. Only Mary Jo Assassin can deliver all three with a smile and a vodka orange juice drink in her hand. – O'Neil De Noux

MARY JO STOOD in her kitchen, staring at the bottle of Smirnoff Vodka in her hand. Actually, it only said Smirnoff on the outside. She had poured out the Smirnoff and replaced it with Absolut Crystal, one of the more expensive vodkas in the world. But she had to keep the fact that she could easily afford Absolut Crystal hidden.

She had a pitcher of orange juice beside her on the counter, ice was a touch away in the fridge, and a highball glass sat waiting.

That wonderful taste of fresh orange juice over ice with the slight flavor of a very good vodka could make a girl smile and she liked to smile.

She made herself look away from the bottle of vodka like a lover turning from a night of sex with a great date.

She was fairly certain she could have just one more. But she needed to be sure. Not like the day-after pill sure, but full condom and birth-control pills sure.

She thought she had done everything right. But she needed to check it all again.

Not a spot of blood could have survived in this modern suburban kitchen. She had even opened every cabinet door and made sure nothing had dripped down onto a hinge or in a crack. She had sanitized every tiny inch with bleach.

Sometimes more than once just to be sure.

She had come to love the smell of bleach over the years. It always signaled a job well done in her mind, which then led her to top-shelf vodka mixed with fresh orange juice.

She had put nothing down any sink, but instead used a plastic bucket for the cleaning water. Then outside in the fenced back yard she had washed the bucket out completely in the gravel at the back end of the path to the yard.

Then she had put the bucket in the ground in a new flowerbed full of roses that she had planted last week. She had punched some holes in the bottom of the bucket, put a new ground-cover plant in the bucket, and filled the bucket up with dirt.

The bucket was covered completely.

Then she had turned on the sprinklers that watered the lawn, including the area of the path where she had poured the cleaning water.

She was very good at this sort of thing.

At five-one and a pixie-like body, no one would ever suspect her abilities to kill. For centuries, her looks had always given her an advantage. And she had used the advantage often.

Now, as a modern housewife living on a suburban street in a small town in upstate New York, the idea that she might be able to kill would be ludicrous to anyone who had met her.

A deadly misjudgment on some people's part.

She stared at the bottle of vodka and the pitcher of orange juice. It had been a perfect day so far.

She could have just one more, she was sure.

But instead she stood there, thinking back over the events so far, the drink not yet poured.

Mary Jo had to make double and triple sure.

Safety first in both sex and murder.