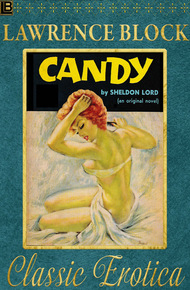 Lawrence Block is a Mystery Writers of America Grand Master. His work over the past half century has earned him multiple Edgar Allan Poe and Shamus awards, the U.K. Diamond Dagger for lifetime achievement, and recognition in Germany, France, Taiwan, and Japan. One of his earliest works of crime fiction, Lucky at Cards, has been getting comsiderable attention of late; his recent works include Dead Girl Blues, A Time to Scatter Stones, Keller's Fedora, and the forthcoming The Burglar Who Met Fredric Brown. In addition to novels and short fiction, he has written episodic television (Tilt!) and the Wong Kar-wai film, My Blueberry Nights.

Block wrote a fiction column in Writer's Digest for fourteen years, and has published several books for writers, including the classic Telling Lies for Fun & Profit and the updated and expanded Writing the Novel from Plot to Print to Pixel—and, most recently, A Writer Prepares, a memoir of his beginnings as a writer. He has lately found a new career as an anthologist (Collectibles, At Home in the Dark, In Sunlight or in Shadow) and recently spent a semester as writer-in-residence at South Carolina's Newberry College. He is a modest and humble fellow, although you would never guess as much from this biographical note.

Jeff Flanders has a perfectly good life—until Candace Cain sashays into it and turns it upside-down. Jeff's got a good-looking wife; he loves her and she loves him. He's got a job, swinging a desk at a semi-shady finance company, signing off on usurious loans to losers; he doesn't love it and it doesn't love him, but it's easy work and it pays the bills. Until that girl called Candy applies for a $1000 loan—with no job, no bank account, no security. Nothing but a beautiful face, an awesome body, and all the nerve in the world. He lends her the money himself. That's a mistake. In return, she takes him to bed. That's a bigger one. All she wants in the world is someone who'll keep her in style. All he wants is more Candy. . .

CANDY, first published in 1960, is a noir novel of sexual obsession. One of Lawrence Block's very early books, it was published in 1960 as a paperback novel under a pen name, and thus got no reviews and no critical attention. The author is delighted to make it available again after all these years.

Lawrence Block has been writing mystery and suspense for sixty years – and Candy is one of his first books. Originally published under a pen name, the book was the epitome of noir before most people were familiar with the term. And it still works, all these years later. Lawrence is a writer I've long admired. His novels and short stories are at the top of our genre. – O'Neil De Noux

I looked away. I didn't say anything because there wasn't much to say.

"I don't like her perfume, Jeff. Did you know that you reek of her perfume? I can smell it on you. You ought to take a shower or something after you—"

She broke off and for a minute or two I thought she was going to start crying again. But she grabbed hold of herself and turned around so that she was facing me. Her mouth was closed and her lips formed a thin red line. When she spoke she talked slowly, carefully, as if she was afraid she wouldn't make it without breaking down unless she pronounced each word meticulously and took her time between words.

"What's there to talk about?"

"There's quite a bit to talk about."

I gave a half-hearted shrug and went over to her. She sat down on the sofa and I took a seat next to her. We just sat there in perfect silence for what must have been at least three or four minutes.

"I suppose it happens all the time," she said softly. "It always happens. You go on being a good wife day after day and finally your husband finds another girl and she's more exciting and more beautiful and more interesting, and she's new and different and all of a sudden he's sleeping with her and you sit home alone and stare at the damned television. You sit home alone rubbing your knees together like a teenager because you want him so much you could scream and all the while he's with some nameless bitch and the two of them are doing all the things you used to do and—"

"Don't interrupt me!" Her face was drawn now and she was rummaging around with her hands the way she always did when she wanted a cigarette. I got a pack out of my shirt pocket and gave her one and took one for myself. That emptied the pack and I crumpled it up in a ball and heaved it at the wastebasket on the other side of the room. It sailed through the air, bounced off the wall and dropped into the basket.

She didn't say anything.

"They tell me women live through this," she said. Her cigarette was lit and she had taken two or three deep drags on it. She was calmer now.

"Women live through this," she went on. "It's supposed to happen all the time. After a man's married so many years he gets hungry for something new and the wife goes around with her eyes shut and her mouth shut and waits for him to get tired of the new one and come back home to mama. Then things are all right again."

I got my cigarette going and took a long drag. It didn't taste good and I blew the smoke out in a long thin column that held together all the way to the ceiling. I stared at the damned smoke with the fascination of a catatonic staring at a blank wall.

"I tried pretending, Jeff. I've known about her for . . . oh, I don't know how long. I half-guessed it when you began being too tired to make love and knew it when you started having to work late night after night. But I can't stand pretending. I just can't take it any more."

She took the cigarette between the thumb and forefinger of her right hand and stubbed it out in an ashtray. She put it out so viciously that she almost knocked the ashtray off the table. She hadn't smoked more than a quarter of the cigarette.

"Is she that much better than I am?"

I sure as hell didn't attempt to answer that one.

"She couldn't be that much better," she said. "There's not that much to it. You just lie on your back and spread your legs and show some life. Maybe she knows something I don't know. Maybe that's it."

Outside it was starting to rain. The rain fell in a steady pattern and the wind was blowing it against our window. It provided a sort of background to our conversation.

"You wouldn't know her."

"I suppose that's some consolation. I'd hate it if it was somebody we both knew. I . . . Are you in love with her, Jeff?"

"Are you going to go on seeing her?"

I closed my eyes. I just sat there with my eyes closed and my heart beating much faster than it should and I didn't know what to say.

"Jeff, can't you stop seeing her? Don't you see what you're doing to me? Can't you see?"

My cigarette had burned down to a stub about an inch long. I put it out.

Lucy was saying: "Jeff, don't I mean enough to you so that you can give up that little bitch? Please, Jeff. I want you. I want you so much I don't think I could go on living without you. Can't you give her up?"

She shrugged, defeated. "I don't know," she said. "We've been married eleven years and for all that time I haven't stopped loving you. I love you right now and I hate you, too, and I just don't understand it. Don't you love me any more?"