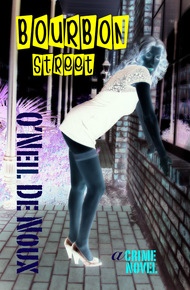 Born in New Orleans, O'Neil De Noux is a prolific American writer of novels and short stories with 34 books in print, over 400 short story sales and a screenplay produced in 2000. Much of De Noux's writing is character-driven crime fiction, although he has written in many disciplines including historical fiction, children's fiction, mainstream fiction, mystery, science-fiction, suspense, fantasy, horror, western, literary, religious, romance, humor and erotica.

Mr. De Noux is a retired police officer, a former homicide detective. His writing has garnered a number of awards including the UNITED KINGDOM SHORT STORY PRIZE, the SHAMUS AWARD (given annually by the Private Eye Writers of America to recognize outstanding achievement in private eye fiction), the DERRINGER AWARD (given annually by the Short Mystery Fiction Society to recognize excellence in short mystery fiction) and POLICE BOOK of the YEAR (awarded by PoliceWriters.com). Two of his stories have been featured in the prestigious BEST AMERICAN MYSTERY STORIES annual anthology (2003 and 2013).

Desiree Blanc wants to be a gun-moll. Born into poverty in rural northern Mississippi, Dorothy Jellnick grew into an ash-blonde beauty. Everyone told her to go to Hollywood, show the movie people a real southern belle. She made it as far as Bourbon Street, New Orleans, where she became Desiree Blanc, a white hot stripper at Hotsy Jazz Club. Determined to never be poor again, Desiree discovers a short cut to big money – crime. It is the summer of 1947.

As the story opens, Desiree and her hoodlum boyfriend rob a tourist from Kansas, leaving the man in his skivvies on a rural highway just outside New Orleans. More crimes and more money follows. The white-hot beauty surrenders to avarice – the unreasonably strong desire to obtain and keep money – in a dangerous and deadly game.

BOURBON STREET is a classic noir mystery with a femme fatale, arrogant criminals, La Cosa Nostra mobsters and an army veteran wounded at The Battle of the Bulge whose love for Desiree is her only chance.

O'Neil De Noux's fiction has been awarded the SHAMUS and DERRINGER AWARDS as well as the 2011 POLICE BOOK OF THE YEAR. A former private eye and a retired police officer, critics have lauded his crime fiction as "hyper-realistic." Bourbon Street is a stand-alone novel set on seedy Bourbon Street in 1947 New Orleans. Can a woman be a femme fatale without realizing she's destroying the men around her? Motivated by avarice, victimized by men, the long cool ash-blond beauty Desiree Blanc's ambition to become a gun moll draws the men around her in a whirlwind of crime and violent death. Web site: www.oneildenoux.com – O'Neil De Noux

YOU RUINED MY STOCKING

Desiree always wanted to be a gun-moll.

On the night she finally became one, they robbed a cattleman from Topeka, leaving him in his undershirt and skivvies along Highway 90, just this side of The Rigolets Pass, the narrows separating Lake Pontchartrain from Lake Borgne. As they sped away in Bogarde's gray Ford coupe with its license plate removed, Desiree looked back at the mark and said, "He'll be eaten alive by mosquitoes."

Bogarde laughed so hard he almost drove off the narrow highway. "We rob the bastard and you're worried about mosquitoes."

"I'm allergic to mosquitoes, mister smarty-pants. I get welts the size of quarters." Desiree turned back around and straightened her dress. The cattleman, whose name was Elmer, had been pawing her, fumbling with the zipper of her new Christian Dior when Bogarde climbed out of the trunk with his forty-five. Dark red, the dress was part of the 'new look' for 1947, a return to the classic feminine 'nipped waist' as the salesman at D. H. Holmes had explained. It was the latest fashion from Paris with a tight waist, big circular skirt and snug bodice which Desiree had to re-fasten as Bogarde zipped the Ford back to the city.

"Better slow down," she said as she finished straightening herself. "And take off that silly mask. All we need is to get pulled over by the cops. You haven't even put the license plate back on."

Bogarde peeled off the gorilla mask and sneered at her. "Cops got better things to do that patrol out here. You OK?"

"Yes," she snapped and tried to control her heavy breathing. Her neck felt flushed and her body tingled with, of all things, sexual excitement. She could barely sit still. What they had just done, the actual stick-up had lit a simmering fire inside Desiree. She felt as if she were on a roller-coaster barreling down the side of a mountain.

She looked at the road. The tall trees on either side gave the road a tunnel effect. In the moonlight, Desiree could make out water beyond the trees on their left. On their right lay a huge cypress swamp, its sickly, musty smell rich in the air. She leaned away from the seat, her back damp with perspiration, sweaty in the middle of the night. It was much hotter down here than back in Wayne County, north Mississippi. She didn't think anything could be hotter than summer in Wayne County until she came to New Orleans where the air was so much thicker, the humidity like steam rising from a boiling pot. She hated the heat.

Bogarde turned on the interior light and said, "Count the take."

Desiree opened the mark's wallet and scooped out the bills, spotting a hundred dollar bill immediately. Bogarde let out an impatient growl. "The money belt, Babe. Check the money belt."

"Wallet first." Desiree's heart raced as she fanned through the bills. Besides the Ben Franklin, there were two Grants, two Andy Jacksons, two Abe Lincolns and two Washingtons. Two fifty-two, not bad at all. She unzipped the money belt and her heart stammered. Nothing but Franklins. She counted them twice, her hands shaking. Five grand in the belt.

"Sweet Jesus!" said Bogarde. They passed a couple fishing camps on creosote stilts, one with lights still on at three o'clock in the morning. Bogarde flipped off the interior light. Desiree rubbed a crisp Franklin between her fingers, feeling its embossed texture. She lifted the bill and sniffed it. She crinkled it, getting excited, breathing heavier now.

"Knew that bastard was loaded," Bogarde said. "Probably even more in his hotel room."

Desiree felt her stomach flip-flop. "I still don't think it's a good idea going to his hotel in the middle of the night. I mean, we'll be seen."

"You'll be seen." Bogarde turned his green eyes to her and gave her the look. He called it his hypnotic stare, managing to open his eyes wide while furrowing his brow. When he first gave Desiree the look three months ago, she felt as if his eyes touched her. Tonight, he looked like a bad actor trying to impersonate Bela Lugosi's Dracula stare. If she wasn't so juiced-up, she'd giggle.

"What did I tell you?" Bogarde went. "Let me do the thinking. You do what you do best. Look sexy." He gave her a wicked grin. "Now put the money away and toss out the wallet and money belt."

"Gimme the mask too."

Jesus – she thought – he got the second part right.

She waited for another swampy area to toss both out. Then she dug the compact and lipstick out of her purse, turned on the interior light again to touch up her lips. No time for contouring, she'd just reapply the crimson lipstick. Normally Desiree painted her lips as carefully as an artist, using several shades of lipstick, starting with pink, moving on to scarlet, topping it off with a deep crimson red that made her lips jump out.

Bogarde laughed aloud. "Man, ole Elmer look like a freakin' retard standing there in his drawers."