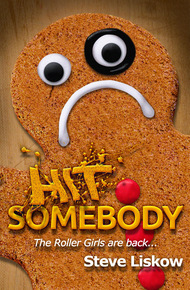 Steve Liskow is a former English teacher and theatrical actor, director and designer. Currently a member of both Mystery Writers of America and Sisters in Crime, he serves as a mentor and panelist for both groups. He also does freelance fiction editing and conducts fiction writing workshops, mostly in his home state of Connecticut, where he lives with his wife Barbara and a rescued Maine Coon cat.

Hit Somebody by Steve Liskow

The Roller Girls are back…

Someone kidnaps Ginger Slap's husband at a roller derby practice, and teammates Annabelle Lector, Tina G. Wasteland and Brenda Scarr join forces with Hartford Cops Tracy "Trash" Hendrix and Jimmy Byrne to get him back.

Ginger's husband was running for Mayor of Hartford on a strong law and order platform, but when she pays the ransom, the money disappears under the noses of the cops and their FBI back-up. Then someone tries to kill Ginger, the same day the cops learn her husband planned a trip to Vegas—but not with her.

Trash & Byrne, as the girls call them, know most of the rules have gone out the window, but the roller girls' mantra is "hit somebody," and it's going to happen hard, fast, and often.

A former English teacher and theatrical actor and director, Steve has been a finalist for both the EDGAR and SHAMUS Awards and has won the BLACK ORCHID NOVELLA AWARD twice. He also conducts writing workshops, does freelance editing and plays far too much guitar in public. He lives near Hartford, CT with his wife and a rescued Maine Coon cat. Set in 1965, Postcards of the Hanging draws us to a time when the Beatles have turned pop music upside down. In the South, the Civil Rights movement is gathering momentum behind Martin Luther King. In Vietnam, the war is heating up. And in Ojibway, Michigan, cheerleader Susie Porter accuses her algebra teacher of rape. – O'Neil De Noux

Goldee Spawn clanks down on Carmen's right. "I know someone who's seen Providence skate. They're faster than nymphos in heat. We're gonna have to push hard to keep up, especially when we're still a jammer short."

"Hey," Annabelle Lector says. "We spend a lot of time on our knees here. Good thing we've got pads."

Most of the women have at least one college degree and a white collar job. They also have dirty mouths. Carmen loves being in a place with other women who don't get upset if she says merde.

"Coach says Providence is fast, so he doesn't want the slowdown against them," Grace tells the blockers. "He says they will simply lap us."

"Swell." That's Goldee Spawn, who seems to be watching one of the redheads.

"Hey, do not kill the messenger."

Carmen follows Goldee's eyes. "What are you looking at?"

Goldee drops her voice. "The twins look like they've got a bug up their ass."

"That's not a medical term, is it?" Carmen watches Ginger pick up a towel, wipe her face and put it down again. Her face seems to be watching for something.

"Any kids at home sick?" Carmen knows the redheads run a bake shop together, but she's not sure if either is married or has kids. "Or maybe work stuff?"

"I don't know." Goldee wipes her own face and tosses her towel back on her gym bag.

Carmen watches the pivots—the skaters who set the pace in a jam—and the jammers—the skaters who can actually score points—start off in threes, two skaters dragging the third between them. After twenty-five laps, they switch places, then again after another twenty-five. Fifteen minutes, seventy-five laps. Carmen knows she's going to sleep well tonight. Sweat plasters her tee shirt to her back, and her thigh muscles have that tuning fork tremble.

They take another break and swill down water. Eau du sweat fills the room, along with panting.

"Blockers." Grace counts heads. They cruise onto the oval and Grace skates backwards to continue her lesson. She touches the girls on their hip or rib cage or booty to illustrate her points.

Two hours later, most of the women look as drained as their water bottles. Carmen sits on the bleachers to remove her skates and soggy socks. Annabelle Lector takes off her helmet and fluffs her blonde hair with a towel so she resembles a sexy dandelion.

"God," she says, "before I started derby, if my panties were this wet, I knew I was going to get laid."

"Oh, stop." Carmen peels off her sweat-soaked knee and elbow pads and thinks about taking a shower here, but decides to return to her apartment, where she can soak in a tub.

Raisin and Ginger lead the procession toward the lobby, their bags slung over their shoulders. Lee holds the door and the other girls pass through.

Outside, Raisin hugs her sister and waves at the Toyota idling by the curb. She crosses toward the cars in the parking lot while Ginger approaches that Toyota, a man at the wheel.

A black SUV swoops in front of the Toyota. Two men in jeans and hoodies leap out, and Carmen has time to notice that their faces are covered before they grab Ginger and she throws an elbow at one of them. He stumbles back but the other locks his arms around her and lifts her off the ground. She screams and tries to kick him.

"What the hell?" Lee surges by Carmen toward the men. He reaches for the guy holding Ginger, but the other guy raises his hand. Carmen hears a shot and a ratcheting sound, then Lee stiffens and crumples to his knees. His hands splay while he tries to get control, and the man still holding the taser kicks him in the ribs.

"Jerry." Grace drops her bag and Carmen sees Raisin dashing back toward her sister as the man holding her lurches toward the SUV. The Toyota's door opens and the driver bursts out and runs at the man holding Ginger.

"Let her go, you asshole." He grabs the guy's arms and Ginger struggles free, falling to her hands and knees. The man who held her turns and slams a fist into the driver's face. He stumbles back against the fender and lurches upright to swing a fist, but the man who hit him before blocks it and hits him again, so hard Carmen feels the pain in her own stomach. She wants pictures of these assholes, but her phone's battery is low and it's not booting up.

"Tom." That's Raisin, who freezes in front of the SUV. The man with the taser aims it at her and she shrinks back into the midst of the women who have dropped their bags and surged forward. Goldee and Grace look ready to drink hot blood.

The other man shoves Tom—Ginger's husband—into the back seat of the SUV and the guy with the taser leaps into the shotgun seat. Carmen's phone comes to life as the vehicle roars up the driveway, misses Raisin by an eyelash, and swerves right on Farmington Avenue. Entrance ramps to I-84 both east and west lie less than a mile away, and there's only one traffic light between here and there.

Grace kneels before Lee, who struggles to his knees again. His joints are rubbery. Ginger is gasping and sobbing "Tom" when Raisin reaches her and pulls her into her arms.

"My God, are you OK?" In the halogen lights from the parking lot, her face is pale as cake icing.

"Did anyone get the license number?" Lugg asks. "Of that SUV?"

Goldee, Tiny, and Annabelle all have their phones out, too. They all shake their heads.