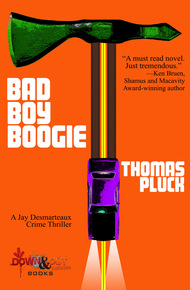 Thomas Pluck has slung hash, worked on the docks, trained in martial arts in Japan, and even swept the Guggenheim museum (but not as part of a clever heist). He hails from Nutley, New Jersey, home to criminal masterminds Martha Stewart and Richard Blake, but has so far evaded capture. He is the author of Bad Boy Boogie, his first Jay Desmarteaux crime thriller, and the upcoming story collection Life During Wartime, both from Down & Out Books. Joyce Carol Oates calls him "a lovely kitty man."

When Jay Desmarteaux steps out of from prison after serving twenty-five years for murdering a vicious school bully, he tries to follow his convict mentor's advice: the best revenge is living well. But questions gnaw at his gut: Where have his folks disappeared to? Why do old friends want him gone? And who wants him dead?

Teaming with his high school sweetheart turned legal Valkyrie, a hulking body shop bodybuilder, and a razor-wielding gentleman's club house mother, Jay will unravel a tangle of deception all the way back to the bayous where he was born. With an iron-fisted police chief on his tail and a ruthless mob captain at his throat, he'll need his wits, his fists, and his father's trusty Vietnam war hatchet to hack his way through a toxic jungle of New Jersey corruption that makes the gator-filled swamps of home feel like the shallow end of the kiddie pool.

Thomas Pluck has slung hash, worked on the docks, trained in martial arts in Japan, and even swept the Guggenheim museum (but not as part of a clever heist). He hails from Nutley, New Jersey, home to criminal masterminds Martha Stewart and Richard Blake, but has so far evaded capture. In his Bad Boy Boogie, ex-con Jay Desmarteaux teams with his high school sweetheart turned legal Valkyrie, a hulking body shop bodybuilder, and a razor-wielding gentleman's club house mother, Jay will unravel a tangle of deception all the way back to the bayous where he was born. With an iron-fisted police chief on his tail and a ruthless mob captain at his throat, he'll need his wits, his fists, and his father's trusty Vietnam war hatchet to hack his way through a toxic jungle of New Jersey corruption that makes the gator-filled swamps of his Louisiana home feel like the shallow end of the kiddie pool. – O'Neil De Noux

She said to meet him in a train station lot. Jay drove there and waited, listening to an AC/DC mix tape Tony had left in the Challenger until a blue Aston Martin DB9 pulled nose to nose with him.

Ramona grinned above the wheel from behind black shades.

On the highway, she winced at the red marks on his nose and cheek. "If I wanted to help you, I should've gone to med school." She weaved through traffic and drafted behind a box truck, the spy-car's nose to the bumper.

"Way you drive, it's good you're a lawyer," Jay said. "Maybe you can teach me sometime."

Ramona wore navy slacks and lipstick that gave her the prim air of a strict schoolteacher. "I trained on the Nürburgring," she said. "Driving here's easy. Just expect everyone to behave like a complete jerk or a total idiot."

The Tick Tock Diner gleamed in the fading sun, a castle of red and chrome on a rise of highway crushed with strip malls. Her favorite after-school haunt, sitting around a plate of fries with milkshakes. She downshifted and swerved into the parking lot.

They sat across from each other in a red leather booth. Waitresses cruised the aisles as Dion belted out an appreciation of the roving life. Jay flipped through the tableside jukebox's offerings. Wandering had begun to sound like a good life choice. Ramona ordered cheese and gravy fries, and Jay a vanilla malt with a cheeseburger and onion rings.

"This place never changes. That's the one thing you miss when you travel," she said. "A good diner where you can get waffles, cannoli cake, or a plate of disco fries twenty-four-seven."

Diners had always seemed like a dream to Jay, with their menus thick as a phone book. Like a deal with the devil, offering anything you could possibly want. Okie always said if he'd busted out, they could shoot him dead soon as he got two things: a face full of a big bouncy woman, and a truck-stop meat 'n three in his belly.

Jay raised his water glass in a silent toast.

"What's that about?" Ramona said. She tapped her phone and tucked it away.

"Thinking of what you said, about starting over."

"Never saw you as a mechanic," Ramona said. "Thought you wanted to build houses."

"I already knew carpentry," Jay said. "So I learned everything they taught in there, and plenty they didn't."

Ramona smirked. "Well, I suppose it's good you kept busy. Mother always said you didn't use your full potential."

"She said a lot of things," Jay said. He pumped a few quarters in the juke. "Thought you never paid her any mind."

"She wasn't as dumb as I thought."

The waitress brought his milkshake. Jay jabbed his straw into the shake and took a hard draw, until his head flooded with malt and vanilla. "Oh, that's good." He spun the cup so the straw faced her.

She pondered the thick contents, white flecked with tiny specks of vanilla bean, then ducked and took a sip. "I'll tell you what I know."

His eyes flicked to her cleavage and he hauled them back up. "I'll take what I can get. I just want to find my folks, but now I'm curious why everyone wants me gone so bad. Feel like I'm the only one who doesn't know the punch line."

"Well after what you did, you can't expect a homecoming parade."

"All I regret's going to jail for it."

Ramona looked into his eyes. "Don't say he 'needed killing.' From his parents' perspective, so do you."

Jay took another draw at his shake, licked his lips and smiled. "Maybe so, but it don't mean I'll let 'em put me down."

"So, you had something to tell me?"

"Matthew's parents split during your trial," she said. "He won't talk about it. Rumor was, Mr. Strick gave his wife herpes. Remember Donna DeVane? She told me she used to blow my classy father-in-law in his Porsche when she was a sophomore."

"The night your parents left town, your mother went to Matt's house. She told his mom something that made her go after his dad with a lead crystal ashtray."

Jay looked into his shake. Mama Angeline caused a minor scandal when she arrived in town with her Fawcett cut and tied-off shirts and cut-off jeans. Strick couldn't keep his eyes off her, but few men could. "You saying they...."

"All I know is Matt hates her, and he testified against you because of it." Ramona swirled the ice cubes in her water glass. "You know how he idolized his father. They didn't get much in the divorce. His father's lawyers were too good for that, and Matthew's been paying him back for it ever since. It's what drives him, and I keep him sane. I'm not asking you to forgive him, just understand him a little. He's as angry about growing up in that mean little town as you are."

"Still can't imagine you and him. He must've changed a whole lot."

"He grew up," Ramona said. "He's got the same fire in the belly you always had. But he uses it differently."

Jay sipped his shake. Watched the endless stream of traffic go by until the waitress brought their meals on white platters.

Jay put an onion ring on his cheeseburger and took a large bite.

She twirled a gravy-soaked steak fry in strings of melted cheese then bit the end off. "Damn," she said. "This isn't El Bulli, but I do like my gravy fries."

"Trade you a ring for couple."

"Knock yourself out, there's no way I can finish this."

"You always said the town dumped Valium in the drinking water."

"If they didn't, they should have. That place was uptight," she gave a husky laugh. "You know that Nutley was once considered boho? My art teacher, Miss Foote? She said the houses by the Mud Hole used to be an art colony, started by...what was his name. He painted portraits of Harlem, in the 1850's. Now they'd burn his house down."

"They'd at least talk and give him dirty looks." Jay traded her an onion ring for a scoop of molten cheese atop a crisp French fry.

The jukebox kicked into an '80s tune by the Cure. Ramona frowned at the speaker and kicked Jay under the table. "Did you play this?"

"I kinda feel in between days myself." Jay grinned and tucked into his burger. They ate in silence while the juke spun through the music of their youth.

"I'm sorry I pushed you away," Jay said while she sucked up the cold dregs of his milkshake. "Friend of mine's woman got stomped real bad in the prison parking lot. Like, wish she was dead bad. I didn't want anything like that happening to you."

"No use crying over it now," Ramona said, tilting the cup to get the last sips.

"Thanks for this," Jay said. "You're the first one's been honest with me."

They walked to the car, the highway twinkling with electric stars. It brought him back to their nights sprawled in the grass holding hands. Thumb circling her palm until she'd pounce, tickle and kiss. Lips hot against the pulse in her neck.

She blipped the Aston Martin unlocked.

"We have a pool in the yard. I bet you still can't swim." She leaned against the driver's side.

Jay took her hand, and she let him. He pressed his lips to her knuckles.

"We could've raised some hell, Blackbird."

Ramona smiled with sad eyes. "You and me against the world." She stroked his cheek, fingertips over the abrasions. Arms around his neck as she rested her head on his chest. He slinked his arms around her waist and held her close, her soft curves molding to his muscle. Nuzzled in her hair, his head flooded with violets. He kissed her scalp, felt fire bloom inside.

She pushed him away, slow but firm. "No, Bluejay."

Jay sat silent in the passenger's side as she shifted through the gears. She dropped him by his car and pulled away fast.