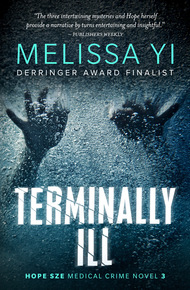 Melissa Yi could slice your throat and sew it back up again. Legally. Because she's an emergency doctor. In her spare minutes, Melissa writes the Hope Sze medical thrillers about Hope Sze, a resident medical doctor who solves murders as well as speculative fiction and memoir.

But when "Elvis the Escape King" chains and nails himself inside a coffin in Montreal's St. Lawrence River, he can't break free.

After Hope restarts his heart and saves his life, Elvis demands to know who sabotaged his stunt.

And so Hope plunges into her most unconventional and most terminal adventure yet. Where the magical art of escape and the dastardly art of crime vie for centre stage, and the better man may lose. Forever.

Melissa Yuan-Innes draws from her personal experiences in the ER in Canada to pen her medical thrillers. In Terminally Ill, an escape artist plunges into the icy waters of Montreal's St. Lawrence River, chained and nailed into a coffin—and never breaks free. After they dredge him from the waves, Dr. Hope Sze resuscitates him, saving his life. When he regains consciousness, but not his memory of the event, he hires Hope to deduce who sabotaged his act. Even as she probes the case, and the strange world of magic and illusion, she must confront her own fears of death on the palliative care ward – and tackle the two toothsome men who can't wait for her to choose between them. – O'Neil De Noux

His breath whistled inside the coffin.

He heard the crowd cheering, although the plywood walls surrounding him dampened their yells. He could hear and feel the rumble of the crane lifting him and the coffin into the air.

He started to undo the chains on his wrists. Usually, those were the easiest.

He slid his wrists inward to gain a little slack, then twisted them to pop his wrists free.

The chains tightened on his wrists instead.

Meanwhile, the crane lowered his coffin into the St. Lawrence River.

Water splashed, and then he could hear the abnormal silence of the water surrounding the coffin.

He bent his wrists again.

The chains tightened once more.

Step two. He reached for the lock pick pinned on his left sleeve to jimmy the padlock on the chains. He always placed the pick on the inside cuff, where it would blend into his costume and he'd be able to reach for it blindly.

The pick was missing.

He reached for the second lock pick secured to his right shirt sleeve, groping the fabric of his wetsuit to make sure he would not mistake the metal pick for a seam.

His heart hammered faster than usual, and his hard, hot breath seemed to fill the coffin. The wood underneath his body felt cold and damp, like water was already seeping inside.

He refused to panic. He could escape the chains. He always had and always would. They had built fail-safes into his act, including a fake chain with a middle cuff that made it easier to undo.

Using his fingertips, he skimmed blindly along the chain on his chest, only to realize that someone had removed the trick middle link.

He was handcuffed, chained, and nailed inside a coffin. In a river.