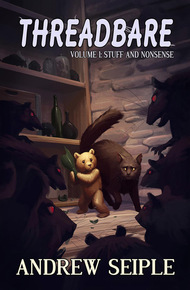 Andrew Seiple has been a voracious reader, roleplayer, gamer, and library enthusiast for years, and is finally getting serious about writing. After a torrid, decades-long love affair with science fiction and fantasy, he's found a true joy in writing books in those genres. His latest concept is the Threadbare trilogy, a litrpg story about a toy golem and his little girl.

Andrew Seiple is a member of the Science Fiction and Fantasy Writers of America.

Meet Threadbare. He is twelve inches tall, full of fluff, and really, really bad at being a hero.

Magically animated and discarded by his maker as a failed experiment, he is saved by a little girl. But she's got problems of her own, and he might not be able to help her.

Fortunately for the little golem, he's quick to find allies, learn skills, gain levels, and survive horrible predicaments. Which is good, because his creator has a whole lot of enemies...

When people ask me where to get started reading litRPG, I invariably recommend Andrew Seiple's books. He's taken the basic quest storyline and made it totally fresh and engaging. I guarantee you'll be grinning as you read the adventure of Threadbare – a sort of Winnie the Pooh in an MMO (but not necessarily for the kiddos.) Luckily, there are two more books out in the series for you to enjoy! – Anthea Sharp

Celia sighed. "You had me worried there for a moment, Threadbare. Here, sit here." She dropped him in the brass basin under the pump, and started hauling on the handle. There was a strange gurgling noise, and Threadbare stared up into the faucet, trying to get a look at whatever was making that noise.

Then, all of a sudden, stuff like tears came flying out, hitting him smack dab in the face, and knocking him over. He flailed, found the water rising around him, and panicked. Scrambling for the edges of the tub, he tried to haul himself out.

You have unlocked the generic skill: Climb!

Your Climb skill is now level 1!

He almost made it too, before Celia grabbed his soggy fur, and tossed him back in. "No no Mister Bear! You need a bath! Back into the water with you!"

After a few more failed attempts, and Celia's repeated insistence, the tiny golem settled down and accepted his fate. He felt bloated, as it seeped through his seams, and made his stuffing swell up inside him. His fur was soggy, and he was thoroughly miserable.

"Hm… water alone won't do it. Wait here." Celia went to one of the doors and opened it, revealing a dark stairway down. She reached up and tapped a crystal hanging from a small chain, and it lit up. "Back in a bit. Don't go anywhere."

She was back in a few minutes with a jar of powder. "Wow the rats are getting bad. Droppings all over the place down there."

Threadbare simply stared at her with accusing button eyes. He was soaked, bloated, and thoroughly unhappy with the situation.

His tormentor giggled, unrepentant. "No, it's fine, watch this." She uncapped the jar and dumped a little powder in. It tingled a bit, and fizzed when it hit the water. Curious, the little bear poked at the bubbles that came out, and watched them pop.

Celia took a brush to him, scrubbing all the dirt and stains away. Then she wrung him out, making him squirm as she twisted his body and squished his stuffing every which way. It wasn't exactly bad, just uncomfy. But he did feel better at the end of it all.

Brushing out his fur was best of all. He settled back into her lap as she sat on the floor and combed him, enjoying the tugs against his hide with every sweep.

"There we go! Just gotta hang you up to dry." Celia bounded up, tucked the comb into her frizzy hair, and pulled a line from one of the cupboards, stringing it between the nearest hooks so that it stretched across the room. "Oh, gotta let some breeze in so you don't get musty!" The little girl popped open the nearest window, and drained the tub, letting the soapy water gurgle away into the pipes. "Just hang out for a little while, okay? Okay." She fastened the teddy bear to the lines with clothespins on his arms, putting a bowl under him to catch any stray drips.

Thus half-crucified, the little golem watched her run out the door back to the front room, open up the front door, and slam it behind her. "Hey Daddy, do you need any help? Are you done? When's dinner?"

Then she was out of earshot, and the golem turned as best he could, surveying his surroundings, trying to make some sense of this new environment now that he wasn't being soaked in water for no good reason.

And then he froze.

Peering in through the open window, scorn written into every whisker, was a feline face. A familiar one.

Pulsivar the cat strolled in over the windowsill, and sat his haunches down on the counter, staring up at the little golem.

Then the golem began jerking frantically, trying to get itself free of the washing line.

Pulsivar's eyes got bigger and bigger, as the thrashing motion enticed him. He crouched low, wiggling his butt, as his tail lashed in anticipation.

"Daddy, do you think Threadbare can help with dinner tonight?" Celia's voice came from just outside the door.

Threadbare's head whipped to the left, and hope rose within his heart—

"What? Oh hold on, I didn't know there was more. Coming!" Celia's footsteps retreated down the path.

—and swiftly fell, as his salvation left him to the mercies of the cat. But the cat had no mercy, and he leaped upon the hanging golem like a fuzzy, fat arrow loosed from a bow with a catgut string.

The rightmost one ripped out of the wall, the line swung, with Threadbare pinned to it and Pulsivar swinging below him like a fuzzy pendulum—

—and both of them went sailing through the still-open basement door. Celia had forgotten to close the damned thing.

At the end of the arc, Threadbare's eyes twitched in horror as the pin holding him to the clothesline snapped off, and cat and golem went sailing down together, bouncing and rolling down the steep wooden stairs, to land in a heap on the dirt floor. A pair of red numbers, '6' for Pulsivar and '2' for Threadbare, drifted up into the air and vanished.

Your Toughness Skill is now level 2!

Above them, stirred by the breeze of their passing and nudged by one of the cat's flailing legs, the door swung closed with an ominous CLICK.

The light, at least, was still on. Threadbare and the cat scrambled apart, rising to their feet. In the light reflected from the glowing stone above, button-eyed determination met a malicious feline glare.

Threadbare found himself irritated by the cat's anger. He was stronger now, tougher, and this creature had fled from him before. Alien instincts flooded him, and he hauled himself up to his full height, putting his arms out wide. He tried to growl, but the lack of a mouth made it impossible.

Pulsivar hissed, with a sound of boiling water. This time would be different! This time the bear would not escape! His fur puffed up…

And in the shadows where the light didn't reach, red eyes blinked open.

Pulsivar paused, as his nose twitched.

Rats. Lots of them.

A chittering filled the dank air, and Threadbare stopped, looked around as well.