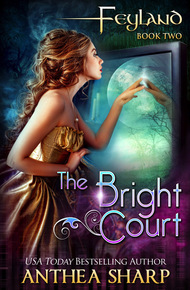 The Bright Court by Anthea Sharp

Tam Linn may be a hero in-game, but his real life is severely complicated. Still, he'll do whatever it takes to stop the creatures of Feyland, even if it means pushing Jennet toward the new guy in school–the one with an inside connection to sim-gaming… and the uncanny ability to charm everyone he meets.

Despite the danger, Jennet and Tam must return to Feyland to face the magic of the Bright Court–and a powerful new enemy who won't stop until the human world is at the mercy of the Realm of Faerie.

Far too many hours playing MMOs led to the story idea of an immersive computer game opening a doorway to the actual Realm of Faerie – and the award-winning, USA Today bestselling Feyland series was born. Follow two elite gamers as they search for answers in-game and try to keep dangerous fey magic from seeping into the real world, while struggling with their own coming-of-age issues. – Anthea Sharp

The eerie call of a hunting horn floated over the drowsing city, sending sleepers' dreams spiraling into nightmare - or jolting them awake, hearts pounding in sudden terror.

Tam watched a single car navigate the streets beyond the medical center. Soon the city would wake, and he'd finally go home. After three weeks in the hospital, the need to be out of there was severe - jangling his thoughts, burning his nerves. He clenched his hands into weak fists. He was still shaky, but he'd hidden it well enough that the docs had agreed to release him. There wasn't any more time to lose.