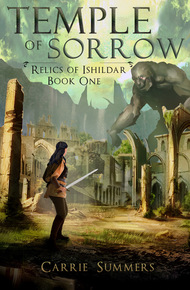 Carrie Summers is an award-winning author of two complete fantasy series. After spending over a decade as a gameplay and AI programmer on MMORPGs, she started to pursue writing and eventually became a full-time author. Early in her career, she won the Writers of the Future contest, known for helping launch the careers of many bestselling science fiction and fantasy authors.

Carrie lives in western Colorado with her husband, daughter, and beloved cats. When not writing and reading, she likes to get outside rock climbing, mountain biking, and generally adventuring.

Temple of Sorrow - Relics of Ishildar Book 1 by Carrie Summers

When Avatharn Online shut down, Devon Walker left the virtual reality arcade for the last time. Or so she thought.

As she's struggling to get by without the income she earned selling her in-game spoils, a representative of an upstart company approaches her with a too-good-to-be-true offer. For the next two years, they'll pay her a whopper of a salary to do nothing but play their new game, Relic Online. Her task is to challenge the game's AI, forcing it to adapt to her creative play.

Sounds easy, right? But when Devon's dropped in the middle of a jungle wearing nothing but a cloth tunic and ragged pants, she quickly finds that the completely sensory immersion of the technology isn't the only innovation the game has in store. The world is as real as anything outside the digital landscape, and survival will take every drop of skill she can summon.

We're lucky to get an early release of award-winning author Carrie Summers' newest novel. Known for her epic fantasy novels, she's taken her background in MMORPG game design and is jumping into the GameLit waters. This is the first book in what promises to be a captivating new series! – Anthea Sharp

Devon shifted, her leather armor creaking as she surveyed her companions. Their familiar faces were grim but determined. No one would turn back now.

They'd gathered in caverns like this hundreds of times, clad in their finest armor, bodies shimmering with the magical energy of a dozen enhancement spells. For five long years, they'd fought shoulder to shoulder. But this battle was different. This would be their last.

"Everyone ready?" Devon's voice echoed in the stone chamber, joining the drip of water falling from hanging moss. Chill air sank through her armor, stiffening muscles she'd limbered on the journey through the forest.

No one spoke. Around the cavern, torches blazed atop poles wedged into cracks in the natural stone floor. The flames hissed under the constant patter of water droplets.

"I'll miss this, you guys," Hailey finally said. Her dark eyes were cast downward, and she twisted the toe of her snake-hide boot against the floor.

Hailey pressed her lips together. Feathers of her headdress brushed her high cheekbones as she shrugged. "I still need to cast Seal Skin."

"Anything else?" she said, taking in the others with a quick glance.

Owen, their rogue-assassin shuffled before finally jabbing a hand into one of his many hidden pockets. He pulled something out, holding it in a clenched fist. "Been saving these forever," he said with a crooked smile. "No point hoarding them now, I guess."

When he opened his hand, Devon's eyes widened. She let out a low whistle. "Three? I don't suppose you want to tell us where you got them…"

Owen shrugged. "Oh, here and there. I've kept the secret for so long, it seems wrong to blurt it out now. Especially seeing as it's useless information in less than an hour."

Fair enough. Devon couldn't stop staring at the priceless treasure in Owen's palm. In the last five years, she'd seen just one Phial of Deification. A legendary Houndmaster had popped it beneath the nostril of a doubly-legendary Hellhound. And that had been such a rare tactic that the entry she added to the Lore had been flagged as dubious. Still, people had whispered that more Phials existed. Somewhere in the vast realm of Avatharn, someone was collecting them.

Seemed that person had been Owen…

"Always figured you were holding out," said Jeremy, a slight figure half-in and half-out of phase with the current plane of existence.

Beside him, Hailey coughed and nodded. The feathers of her tunic rustled and released an unpleasantly bird-scented gust of air. It never seemed to bother her that she smelled like a budget pet store.

"Hey!" Owen protested. "It's just hard to decide when to use something like this, you know? No fight ever seems worthy."

He ran a finger over the Phials. Liquid swirled within the little glass tubes, glowing faintly with celestial light. Devon pried her eyes away. She didn't want to seem greedy.

"Question is, who uses them?" she asked. "I assume you'll keep one for yourself."

Owen glanced toward the low passage at the far side of the chamber. The torchlight glistened off the walls but penetrated just a few paces into the tunnel. A layer of water covered the corridor's floor. Inky. Hiding all kinds of surprises, no doubt.

"Here's the thing," Owen said, looking around the group. "I'm not critical to this fight. The Phials need to go to the people who matter. We have to get Devon into position and keep her alive—that's the whole point. We should go old-school. Keep the beast's focus on Chen." He glanced at a suit of mithril armor with a human somewhere in its depths. "And we can't let Jeremy go down because we need his heals."

Jeremy shook his head, or at least it looked that way. Hard to tell when someone was drifting out of phase. "If I have to crack a Deification Phial, we are so deep in the shit we might as well undress and roll in the acid pools."

"Guess that's a fair point." Owen shrugged, shifty eyes glinting. "You guys fight it out then. I don't want one. Consider them a farewell gift—"

He sighed. "Yeah, yeah. Anyway, Devon, you have to take one. The rest of you guys can roll for them."

Chen shook his head, his plate helm sliding easily upon the gorget that protected his neck. His voice echoed from the depths of his armor. "I'm not really interested in experimenting after last week…"

Jeremy snorted. "The ale, you mean? You should be proud, man. First person ever to hurl after drinking in-game grog. It's not even real."

"The crap still makes you feel dizzy," Hailey chided. "Chen's too young to have your vast experience with intoxication."

Jeremy smirked. "I assume you're sitting out from the roll, right Hailey? Catholic if I remember. Seeking deification sounds pretty sacrilegious."

The druid scoffed. "And two days of chanting in a pagan tongue to get my Raven Form wasn't? Also, at least I have a faith, numbnuts."

Jeremy laughed, a strange warbling sound as his phase-shift wavered.

Devon rolled her eyes. Enough of this. "Owen, you better just run the randomizer. Otherwise they'll fight about it for hours."

Owen nodded, and his eyes went distant for a moment. "One to Hailey, one to Maya."

Hailey accepted hers with a grin, while the other woman, a halfling scarcely taller than Devon's rib cage jerked in surprise before stepping forward.

"Deification for the summoner. Seems a bit meta…"

"I prefer the term Mistress," Maya said with a sly grin. "But yes, if you want to get technical, they do."

"Chen always wants to get technical," Jeremy said. "The Lore this, the Lore that."

"Speaking of…" Chen said without a hint of self-consciousness. "The Lore says that a summoner is the least useful of all the specialties in this fight."

Maya's hand froze at the opening to her reagent pouch. She'd been ready to deposit the Phial inside it with her precious spell components. "I don't need to keep—"

Devon snorted, slicing off Maya's objection. "That might be true, Chen, but how far as the Lore gotten parties so far? The longest anyone has lasted is about three nanoseconds. In Thevizh's case, the Lore is just guesses and interpretations of arcane fragments."

A faint splashing sound came from the exit passage, followed by an air current that smelled of mildew. No, worse. It smelled like somebody had left a dead fish to rot in a shower drain. Devon grimaced.

"This is crazy. You know that, right? Do any of you guys think we actually have a chance?"

"Not a prayer," Jeremy said.

"We won't even leave bodies to mark our resting spots," Owen added.

Nervous laughs filled the chamber, but after a moment, they were replaced by genuine grins.

"We are so hosed," Jeremy said.

"Especially now that you guys wasted a mythical Phial of Deification on your summoner," Maya said.

Devon laughed. "Let's do this. Hailey, hit us with Seal Skin."

As Hailey spoke the incantation, colors rippled across her flesh. Her face shifted, taking on the aspect of a drowned thing, all pale and rubbery. Her eyes filmed over. Devon turned aside—she'd always hated the visual effects of the druid's aquatic spells. She didn't look back until the final syllable left Hailey's mouth and her features snapped back to normal.

Devon sighed as she felt the spell land. Seal Skin repelled water like a mofo. She hadn't realized how slimy the inside of her armor had gotten until the spell sucked the humidity away. Water droplets beaded on her skin and leather, sliding down to pool on the floor. No longer clammy, she felt downright comfortable. More than that, she felt impervious. With an archdruid like Hailey casting the protection spell, most water-based magic would splash right off her. It was good to have competent friends.

"Well, once more into the breach or something?" Owen asked, rolling his shoulders.

Devon nodded. "Once more into the breach."