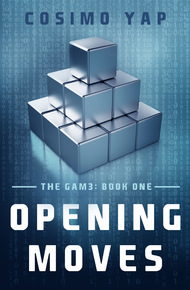 A California native, Cosimo Yap has spent much of his life playing games and reading books. Opening Moves is his debut novel. Maybe he'll finish the series one day.

The Earth is changing. The alien invasion brought social upheaval, advanced technology, and an armada of peacekeeping robots. But Alan, a college student pursuing a now-useless degree, cares little about all of this. He has only one thing on his mind: the Game.

A fully immersive virtual reality, the Game appears to be a major part of the invading civilization. Alan can't wait to play, recklessly diving into the digital universe. Soon though, Alan realizes the Game is anything but simple, and the stakes are higher than he ever imagined.

Cosimo Yap is one of the first to push the envelope of the genre into SF. His futuristic world deals with alien invasion, robot peacekeepers, and a game that is far, far more than it seems. Published in early 2016, this novel was among the first big wave of litRPG to hit, and has enjoyed a wide following ever since. His second book in the series is available at all online retailers. – Anthea Sharp

"But it's not," Alan replied. "You told me that the Game affects real life. That if you conquer a planet in the Game, you control it in reality."

"Sure, it's a virtual reality massively multiplayer online role playing simulation that was designed to replace all war, but it's still a game. And you need to treat it like one." Icewolf sat back in his chair. He was leaner than Alan remembered; the light grey jumpsuit he wore fit him like a glove. It was emblazoned with the Omnitech Industries logo, a giant steel pylon being struck by lightning.

Alan shook his head, then stared out the window. The view of San Francisco was gorgeous. If anyone had told him a year ago that he would be sitting in a penthouse suite decked out like a Bond villain's lair six months after aliens invaded, about to enter the virtual reality game that was central to their society, he would have dismissed them as a troll. Yet, here he was. A college student with unkempt black hair. Anonymous, or so he liked to think.

"If you play a game, you play to win, right?" Icewolf asked.

"So if it was a role playing game, where shit is worth something, you would take anything not bolted down or kill another player for their gear, right?" Icewolf asked.

"If I wouldn't get caught and was playing a Rogue-type character, sure, but—"

"But nothing, there are no alignments. You play the Game to win. Don't treat it like reality or just another job, it's not, the rules aren't the same. If you die, you'll respawn. If you kill stuff, you'll get rewarded. If you kill enough stuff, you'll level up. And so on. So throw caution to the wind and act in your own best interest."

"Oh, I know that," Alan said. "I didn't become one of the top raiders in the guild flailing around, but I never imagined that this would be my career path. Not that a college degree is worth much with all the AI running about."

Icewolf opened his mouth, closed it, then opened it once more.

"All right, sure. Do your thing, build your... character like you want. There are still laws within the Game, though, so try to follow those. As the good old United World Government rules the Earth, the laws are basically the same. And remember they were able to make the laws not because they were elected, but because they hold the Control Points in the Game."

"Trust me, when the Enforcer fleet first came here they did jack shit but hand out capsules and broadcast the Message. UWG laws weren't enforced until they had Earth conquered in-game."

"Okay, okay, I believe you. It explains why credits are worth ten dollars each. Can I start playing now?" Alan asked.

Icewolf glanced over at Alan's capsule. It was a smooth metallic grey oval about 10 feet long resting on a large black rectangular docking bay, like for a phone, but much larger. Attached to the docking bay were all sorts of metal wires and tubes, some nearly an inch in diameter. Everything led into the walls and floor, off to who knows where.

Alan's capsule looked slightly different from the four others in the suite; it was slightly larger, was a darker shade of grey, and included a black box attachment that the others didn't. The black box was attached to a miniature satellite dish, as well as to all of the screens at the center of the room, and had a series of giant Ethernet cords running off of it. All in all, the capsule reminded Alan of a sensory deprivation tank more than anything else.

"Fine, last words of advice," Icewolf said for the fifth time. "Focus on yourself before anything else, but remember you owe me ten million dollars for the capsule. You can begin paying me off after the tutorial.

"I recommend energy weapons, they're easy to use. Point and shoot, no recoil or reloading needed. Armor is of the utmost necessity. Don't piss off anyone with bigger guns or a backer you can't trace. Finally, are you sure you trust that AI you designed? I know you programmed it yourself, but there have been incidences of AI going haywire after being transferred into the Game."

"Eve is the reason I made it here," Alan replied. "She was designed to beat games."

"Just be careful. The AI that oversees the entirety of US military operations is only rank B, and your AI is apparently rank D. Combined with the rank B capsule..." Icewolf trailed off.

"How accurate are these ranks anyway? Shouldn't a game use levels?" Alan asked.

"Ranks are accurate enough that everyone from the Department of Education to the god damn Pentagon now use them to assess and classify everything from cubes to spaceships," Icewolf said.

"And the Games does use levels, but that's tied to your character; ranks judge the strength of everything else, from items to monsters to abilities. The reason your capsule cost ten million instead of a hundred thousand is because it's a rank B capsule specialized to let you have an in-game AI, and I got it for a steal. Nowadays, I bet an Olympic weightlifter's strength would be rank D at most, and a capsule like this one could sell for 50 million on the open market."

"Got it, my AI is over powered, the capsule even more so, and I'll start paying you back once I'm done with the tutorial. I'm still not sure why you decided to take this risk for me, but let's get started," Alan said, walking up to the capsule.

As soon as he was a few feet away the capsule opened, revealing a pool of silvery liquid a few feet deep. Alan looked over to Icewolf for reassurance.

"Think of it as an investment; I have the capital and want to sponsor a friend I know is a capable gamer. I'll have some jobs for you once you've finished the Tutorial, but focus on that first. And remember, it's just a game!" Icewolf said.

Taking a deep breath, Alan climbed into the capsule and submerged himself in the liquid, which felt like fluid gelatin. The lid closed over him, leaving him in complete darkness. Panicking, Alan began thrashing about, sure he was going to drown. This was some cruel joke; a way for aliens to harvest gullible, unintelligent humans. Yet when he opened his mouth he realized he could somehow breathe this liquid. Alan took a few deep breaths, then faded into unconsciousness...