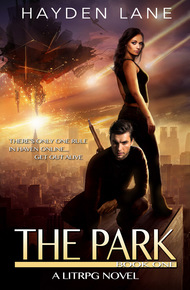 An avid gamer and father of one, Hayden started reading Gamelit books and found a new passion. He hopes to improve with every book and with the help of readers, and one day maybe earn his living writing game novels. Or at least pay his subs!

The Park - Book 1 by Hayden Lane

When Garrett Jones discovers the legendary game Haven Online is back—along with its 5 Million credit prize—he seizes the chance to use his tanking skills to win the jackpot and give his dying sister immortality within the virtual world of The Park.

But Haven has its own rules, and Garrett is forced to play a caster class: Blue Mage. Danger looms as Garrett and his small team of friends grapple with threats that have dire consequences in-game…and beyond.

With a futuristic world compared to Ready Player One, (litRPG Podcast) The Park Online is a fast-paced cyberpunk thriller with plenty of MMO fantasy gaming and a richly balanced universe.

Striking a great balance between in-game excitement and real world tension, The Park is a gripping cyberpunk thriller as well as a satisfying litRPG novel. Fans of fantasy MMOs will find plenty here to enjoy, plus additional complexity in-game and out with added futuristic and dystopian elements and a high-stakes endgame, from newcomer Hayden Lane. – Anthea Sharp

When I didn't hear from the fourth member of the party, Jamie, I waved the air again and pulled up the Shibuya map. White dots showed players as their movements tracked mostly in the shops. Blue dots were NPCs. Green were FPCs. And red dots were our mark.

Party dots were bright yellow. I could see Yano and Arden. Where was Jamie?

Garrett 8: Jamie? Where are you?

Yano 0: I thought I saw his dot duck into a building.

Yano 0: About fifty yards to the left of the where the perp is now.

Moving into a building shouldn't block him from our system access. As assistant admins, we had full access while hunting for a Burn.

Yano 0: Target's passing beneath me. Engage?

I transferred a percentage of my SP to Yano. As a Sniper class Burner, he used a lot of skill points to maintain his Stealth. I hated that the system capped it at a thousand. It needed to be more.

I moved, popping my cool-downs for Silence and Speed. They would only last a full minute with a full two-minute regen, but a quick calculation gave me good odds I'd make it to the alley and the Target before time ran out.

I kept my map up and moved it to the left side of my peripheral. I was waiting for Jamie to blink back into view. He had to be there. I just didn't know how he was invisible—

He showed up just as I stopped six feet from the Target.

Garrett 8: Nice of you to join us. Where the hell have you been?

Jamie 5: Focus on the dickhead about to shoot you instead of what I was doing. Oh, and you're welcome.

What? I refocused on my front and saw the Target, a very tall and imposing figure in a cloak that billowed out around it as it spun and aimed its targeting reticle at me. The red dot moved up the debris-strewn alley and landed on my chest. I couldn't see inside its hood, and my system couldn't tell me what kind of armor it was wearing. It wasn't like anything I'd seen in game. Maybe it was something new. Whatever it was, its stats didn't register.

If it had any.

This was all new to me. I'd never hunted and burned a Ghost before. It was up to the Burners to remove it.

In truth, it could shoot me all it wanted, but my HP was locked. It had to know that. It couldn't kill me or any of my team. In the past, Hackers had managed to disable assistant admin accounts (AAA) like mine and delete them, thus kicking the user out of The Park's system. Sometimes they stole full accounts, leaving the player penniless and evicted from their own homes.

A peripheral warning turned my HUD red as a wire-framed schematic was overlaid on my position. The Park system analyzed the danger, and my jaw dropped when I saw the readout.

fhehsohend targets you with Electric Shot.

I saw the purple arc heading for me and raised shields with the added boost from The Park system defense. It clipped the shield and drained it by fifty percent.

Arden 1: But…this is a commercial zone! No combat! How can that thing fire off magic?

Garrett 8: And hit. It drained my shield to half.

I thought it had been a little odd that a Ghost had tried to hide in a commercial area, since combat was forbidden. Or it was supposed to be. The Ghost (why did the system call it by its creator's name?) shouldn't have been able to fire magic, and that magic should not have affected my System Enhanced Shield.

Something flashed in front of me as fhehsohend fired its gun. I aimed my weapon but hesitated when something spun out of their weapon. It wasn't the familiar liquid neon of a laser or the splitting air of a bullet. I took a step back as whatever it was coming at me spread into the shape of an octagon.

fhehsohend targets you with Neuro Net.

A neuro net? Those things were illegal in The Park. In fact, they weren't supposed to work. But I spotted the arcs of blue running along its spidery webbing. Illegal or not, it was real, and it was heading toward me.

My dex and speed were top, but I moved too late. I knew that thing was going to envelop at least half of me. Whether it worked would be up to the hacking ability of the anomaly's creator. It'd somehow hidden that weapon from any scans the system had used on him.

I knew Arden had run up the alley from her position to ours. I saw her dot on my map. I landed on the ground to my left and braced for impact. My weapon would damage the player. Using it against the net would be useless.

Another light flashed in front of me, like the one that showed up before the Ghost fired. It flashed because the neuro net hit it and hung suspended in the air, more blue arcs stretching out from its center and revealing a barrier that stretched from one side of the alley to the other.

Yano's rifle went off, binding the Ghost where it stood. I got to my feet and brushed myself off as Jamie appeared to my right. I smiled at him. "You were putting up the barrier. That's why you weren't on the map."

"You knew it had a neuro-net gun."

"The original fhehsohend's dossier. I'm tellin' yah, Gar, you gotta read all of it. Not just the stats. The Admins put together a full dossier on these assholes. Fhehsohend's got a history of leaving his victims kicked, their characters deleted. So it made sense his Ghost would be just as armed. These nets are perfect for that."

"Yup." Jamie waved his hand in front of him. I could see his menu. With another flash, the barrier dissolved, and the net fell to the ground where it vanished.

Yano and Arden flanked the Ghost as I smiled at Jamie. "Thanks."

"Like I said, you're welcome." He made a gesture for me to proceed him.

I gathered my pride and approached the bound Ghost. It was bound but not silenced. Why silence a computer Ghost? They weren't supposed to speak.

But this one did.

"You're making a mistake," the fhehsohend Ghost said. Its voice was deep and being run through several scrambling apps.

"We never make mistakes," I said as Yano stepped forward and read off the very lengthy list of fhehsohend's crimes.

Arden gestured in her own menu and the cloaked figure knelt. It didn't fight the order of the system. Being bound by a Burner meant you were now under The Park's command.

I moved forward and yanked its cloak back. The Ghost wore a mask of black with no features. Arden helped me remove that as well.

We didn't find an elf avatar beneath that mask. A human-looking female with dark hair and dark eyes stared up at me. I pulled up the Ghost's stats to double-check. They were all different. Even the name was different.

"What's going on?" Arden said. "Is this fhehsohend's Ghost or not?"

"I am not fhehsohend. I am not a Ghost. I am Gillga Montock." She stared at me with those dark eyes. "And you are about to make a terrible mistake."

"No." Jamie stepped up and put his burner weapon in her face. "Your Hacker made a bad mistake. Time's up!"

As always, to anyone else in The Park, civilians saw the character vanish. But Burners saw the graphic aftereffects. I knew the gun was simply the means the system used to track down the user's position, identify their DNA and sever their link. But what I'd always watched and felt proud of was seeing the look of panic and pain on the perp's face as their body turned to dust and ash and faded away.

But not this time. I'd never seen a Ghost burned.

A message appeared on my HUD as the wind blew her avatar away like ash.

Gillga Montock: Don't trust The Park with your life. It's watching you. It will burn you.