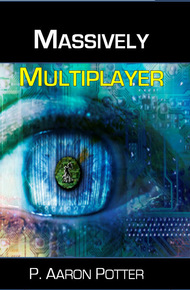 Banished to Darkest Oregon, Aaron Potter grew up a Geek in the Wilderness. Star Trek, Tolkien, and TRS-80ii BASIC kept him (mostly) out of trouble until college, where he finally encountered enough nerds to know he wasn't alone. Though his brain is clotted with D&D modules and Monty Python skits, he somehow netted a Ph.D. in literature and cultural studies and a cushy job lecturing at a university in sunny so-Cal. Astoundingly, he tricked The Smartest Person in the World into marrying him. He knows darn well he doesn't deserve her. When not writing or teaching, Aaron is usually coming up with new ploys to ensure his kids grow up as geeky as he did. He can be reached at professor_daddy@yahoo.com

Winner of the 2011 Eppie Award for Science Fiction, this novel was a forerunner of the GameLit genre. Set in the near future, it's player versus hacker in an immersive game world where lives are at stake. More than just a fast-paced adventure, though, P. Aaron Potter's book explores questions about corporate responsibility and tech, and in a way foreshadows the issues at the heart of Ready Player One. – Anthea Sharp