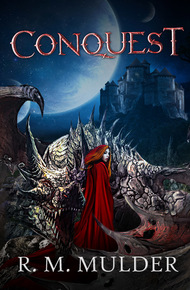 Most of his friends from High School still don't even know his first name. Known only as either "Mulder" or "Agent", there was an unforgettable moment when a girl he was dating expressed her confusion when a friend approached him and called him "Richard". The ongoing joke was "Hey Mulder, where's Scully?" Ironically he later married a redhead...

R. M. Mulder began querying agents for his novel CONQUEST back in January 2016. He then received some inspirational feedback from one of the editors involved in a query contest that had stated in part, "Honestly? Everything about this screams 'Blockbuster self-pub!!' Writing is sharp and commercial. Author has a plan. Go be Hugh Howey. I don't think querying is gonna go your way, and you've got big vision." Mulder ran with this inspiration, and has since become an Amazon Bestselling Author several times.

An ancient continent is missing from Earth. A primeval darkness threatens mankind. A modern woman discovers her destiny.

When undercover agent Lily Thatcher is ordered to undergo a dangerous medical mind-wipe procedure prior to re-assignment, she avoids arrest and becomes a rogue agent. She quickly learns that there are much greater forces at work that are far beyond her comprehension.

Timur Demyan, formerly known as the feared Tamerlane of the ancient Tumurid Empire, has forged an alliance with a loathsome creature called the Leviathan. This beast's insatiable hunger is currently being fed by another world's few remaining souls. For now. Their paths meet at a showdown, but Lily knows that there's far more at stake than just her mortality. A morbid question looms in the back of her mind: Can she prevent Earth's Apocalyptic Fate?

R. M. Mulder's genre-bending adventure takes the reader through gaming, biblical references, and world mythology, in search of bigger answers. This Science Fantasy adventure unfolds in layers, drawing the reader in to ponder the bigger questions of fate and enlightenment. – Anthea Sharp

With his guild gathered, Allan Young pressed firmly on his right temple and brought up his HUD. As the leader of his guild, his profile @Hellekith was infamous inside the game DarkForce. He divvied out the tasks that would help them succeed in their quest based upon the skill level of each player. The massive fortress of Atlantis had been overrun by the Creed of Nephilim, and it was their solemn duty to take the fortress back by force and restore the throne to its rightful heir.

"@Vragyth16, report!" he whispered through the comm.

"Sir, our battering ram is in place," he responded.

Allan used his bio signature scanner to check their surroundings. It was a bit unnerving that they stood at the foot of the massive gate, but there was no sign of the Creed for miles. All of their previous raids and quests had been met with severe resistance and a lot of bloodshed.

This is too easy. Something's not right.

He felt somewhat guilty. @Gihr5 was still a noob to the game, which meant he usually had to do all of their dirty work. If he were killed at the beginning of the quest, as was quite common, he would have to trek all the way back from his spawning point. This often meant that he would miss the entire quest and would be unable to gain any XP, let alone level up.

Oh well. He's a good sport about it.

@Gihr5 approached the gate with his plasma rifle drawn. He tapped at the gate with the tip of his gun and relaxed his pose, relieved that it wasn't protected with a force field.

Allan caught a strange movement out of the corner of his eye. Just a few feet away from @Gihr5's position, a flaming sword suddenly appeared to be hovering in mid-air.

"Watch out!" he called, but it was too late.

The hooded creature withdrew the blade from @Gihr5's body and let it crumple to the ground.

Allan drew his own sword and swung around, his blade clashing with the parry of an invisible blow. The cloak dissipated, revealing the towering figure of another hooded minion of the Leviathan. His Augmented Vision then alerted him to a large number of the Creed spawning in various locations all around them.

Allan attacked with his signature strike, killing the wraith in a single blow. He doubled back, and activated the battering ram in haste. Unfortunately, two of his guild members had failed to move out of the way and were battered to death.

Great. I'm sure I'll get an earful from them later.

Three more wraiths came galloping toward him on their steeds. He closed the gap in a sprint, throwing one of his massive shoulder pads into the side of the beast. Startled by the forceful impact, the horse reared up on its hind legs and the wraith fell off of his mount. With a swift stroke, Allan beheaded the hooded creature.

The other two wraiths came galloping back, but Allan was ready for them. With a wide swing, he severed the front legs of both horses. The whinny from each sounded more like screams as they each crumpled to a halt and sent their riders flying in the air. He made quick work of each wraith, and then returned to the screaming horses to put them out of their misery.

The mechanical ram battered relentlessly at the steel-reinforced gate while the chaos surrounded them from all sides. The comm channel was overwhelmed with expletives as the battle raged on.

This quest was sheer suicide!

After destroying another wraith, Allan ducked behind the battering ram for cover and pulled up his guild's stats on his HUD. He cringed. Nearly half of his guild of 20 had already been killed. The casualties were too large to carry out their quest, and there was no way the other half of his guild would make it back in time from each of their spawning points. He had to make a difficult decision – one he'd never had to make before, and it would ruin his reputation.

He took a deep sigh and activated the comm. "Retreat! I repeat, everyone fall back!"

@BlondeWarrior made a sideways glance at him after she cut down another wraith of the Creed. The look on her face said it all. She frowned, and then pressed on her right temple. In a flash of light, she disappeared.

Parrying another blow, he watched the radar on his HUD as the signature of each member of his guild logged out and disappeared. Swinging a final strike, his sword sliced cleanly through the torso of his attacker. He pressed on his right temple again and swiped his hand to the right. A box appeared:

Are you sure you wish to abort this quest? You will be penalized 1,000 XP.

No wonder she was upset.

He also knew they were leaving their battering ram behind – which meant hundreds of logged hours of looting and plundering to obtain the necessary funding was about to go to waste. Allan sighed and aborted the quest they had prepared so much for.

He swiped past the end game credits, not wanting to see how poorly his entire guild had fared. Landing in the lobby, he cringed to see @BlondeWarrior waiting for him with her arms crossed over her scantily-armored chest.

"Why'd you abort?" she seethed. "You and I alone could have brought the Creed down to their knees."

Allan shook his head. "The quest was compromised. We had already lost more than half of our guild."

"I had already delegated the assignments…"

"You know what your problem is?" she interrupted. "You gotta just roll with the punches."

He knew she was right, but he just didn't have time to come up with multiple scenarios anymore.

"You're getting soft." Her avatar's eyes bore into his with scrutiny. "What's your problem lately, anyway? You always seem distracted."

"If you must know," he said with a smile, "I'm proposing tonight."

"I'm flattered!" she teased. "Seriously though, who's the lucky girl?"

"My girlfriend Lily." His eyes lit up. "We've been together for three years now."

She whistled. "Jeez, that's a long time. The longest relationship I've ever had was a month at best."

"That's hilarious. You? In a relationship?" Allan chuckled. "Like you've ever had a real one."

"What's that supposed to mean?"

"Tying myself down into a contractual monogamous relationship? No thanks."