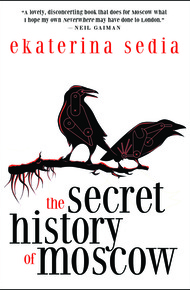 Ekaterina Sedia resides in the Pinelands of New Jersey. Her critically-acclaimed and award-nominated novels, The Secret History of Moscow, The Alchemy of Stone, The House of Discarded Dreams, and Heart of Iron, were published by Prime Books. Her short stories appeared in Analog, Baen's Universe, Subterranean, and Clarkesworld, as well as numerous anthologies, including Haunted Legends and Magic in the Mirrorstone. She is also the editor of the anthologies Paper Cities (World Fantasy Award winner), Running with the Pack, Bewere the Night, and Bloody Fabulous as well as The Mammoth Book of Gaslit Romance and Wilful Impropriety. Her short-story collection, Moscow But Dreaming, was released by Prime Books in December 2012. She also co-wrote a script for YAMASONG: MARCH OF THE HOLLOWS, a fantasy feature-length puppet film voiced by Nathan Fillion, George Takei, Abigail Breslin, and Whoopi Goldberg to be released by Dark Dunes Productions.

The Secret History of Moscow by Ekaterina Sedia

Every city contains secret places. Moscow in the tumultuous 1990s is no different, its citizens seeking safety in a world below the streets - a dark, cavernous world of magic, weeping trees, and albino jackdaws, where exiled pagan deities and faery-tale creatures whisper strange tales to those who would listen. Galina is a young woman caught, like her contemporaries, in the seeming lawlessness of the new Russia. In the midst of this chaos, her sister Maria turns into a jackdaw and flies away - prompting Galina to join Yakov, a policeman investigating a rash of recent disappearances. Their search will take them to the underground realm of hidden truths and archetypes, to find themselves caught between reality and myth, past and present, honor and betrayal . . . the secret history of Moscow.

Sedia's novel is a wonderfully haunting exploration of both modern Moscow and the hidden Russian fairy tales still hiding in its shadows. Neil Gaiman called it a "lovely, disconcerting book", and it's hard to disagree! – Lavie Tidhar

Her name was Elena, and she ran away from her home in St Petersburg suddenly filled with empty echoes after her husband was put in stocks and shipped somewhere unimaginable. She realized that she could not win. No matter what she did she would be either a bad daughter to her father, the widowed Count Klyazmensky, or a bad wife to her husband Dmitri. The truth was, she was tired of both men in her life, and she packed two modest trunks with clothes and knickknacks she couldn't quite dispose of yet, handed the keys to her house on the Neva embankment to her housekeeper, and told her coachman to take her to Moscow. Everyone assumed that she was going shopping, and out of the corner of her eye she saw people—even servants!—shaking their heads with disapproval.

In truth, she wasn't sure what she wanted to do in Moscow. She could visit some remote relatives, but her heart wasn't in it. She could take rooms and cloister herself from the world. Instead, she wandered down to the Moscow River embankment and watched the frozen river, green with crusted ice, with black cracks showing the sluggish black water underneath. She shivered in her furs and wondered if the water was as cold as the air that clouded her breath as soon as it left her lips. She stayed there until the stars came out.

The night had a different color here—farther south, the blue of the sky had grown deeper, more saturated, and the stars had become large and yellow, not the white pinpricks she remembered from St Petersburg. She missed the aurora borealis.

A movement on the ice caught her attention—she squinted at the dark shapes, worried that some clueless peasant children had wandered onto the ice, thick but liable to split open every time a smallest child set a lightest foot on it. She was about to call out, to tell them to get back, when her breath stopped fogging the air; she forgot to breathe. The shapes crawled out from under the embankment on which she stood, covered in mud and raw sewage, and they were not children at all but grown women. Pale filthy women, dressed in nothing but thin linen shirts.

They crawled on all fours like animals, until they reached the first patch of open black water. They slid into it, one by one, noiseless as seals. Before Elena could break her stupor or call for help, they re-emerged, sleek and clean, the linen clinging to their young bodies, their wet hair plastered to their faces and necks. As she watched, they gathered on the ice where it seemed more solid and held hands, forming a circle like peasant girls did at weddings. And they started dancing— moving around in a circle, faster and faster, until Elena felt dizzy. And then their bare feet left the ice, and the women danced in the air, water on their shirts and faces frozen. They looked like ice sculptures come magically to life.

Elena leaned over the embankment, her heart racing. In the back of her mind she knew who these women were—rusalki, spirits of drowned girls, but she wanted nothing more than to join them. There was nobody around, and she climbed over the parapet, awkward in her heavy skirts and coat, but eager. She could not remember the last time she had such a longing to join people.

She stepped onto the ice; the women seemed oblivious to her approach. She skirted far around the black dizzying splotches of open water. The ice creaked under her shoes. She was close to them now. Just as if someone had given a signal, all of the faces turned toward her, and she heard a thundering, roaring noise as the ice cracked under her feet, opening a black rift across the river. Her feet slid from under her, and the black water reached up, seizing her chest in its icy embrace. It flooded her mouth opened in a scream, washed over her eyes, twined her hair around her neck. She felt hands on her shoulders and arms, and grabbed at them. But instead of pulling her to safety, the women laughed and pushed her down, down, deep down into the black water where even the wan starlight could not reach.

Her lungs burned and her chest heaved, rebelling against the dead heavy embrace of the ice-cold water. She swallowed and breathed water, feeling it churn in her stomach, waiting for the inevitable darkness. She felt hands dragging her along, under ice, where the starlight did not reach and where she could not hope to reach the surface.

Her skin was so numb from the cold that it took her a while to notice a change in temperature—the water had turned balmy, and the glow on the surface signaled escape. She lunged toward it and did not believe her senses when her head emerged into musty stale air and her lungs convulsed, expelling the ice-cold water of Moscow River into the unknown warm lake. The girls that dragged her there surfaced too, laughing and lisping gentle nonsense. She didn't know where she was, but she knew that her former concerns had fallen away, like crust from the eyes of a cured blind man.