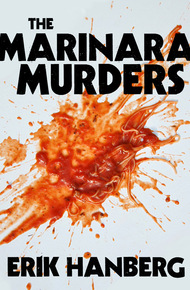 The Marinara Murders by Erik Hanberg

A grown man living in his mother's basement, disgraced detective Arthur Beautyman knows his life has fallen off a cliff.

But that doesn't mean he has to be happy about his mother's solution to his woes: volunteering him to solve a case for her favorite bridge partner. Oh, and to make matters worse, she wants to be his partner on the case as well ...

Arthur Beautyman sat unmoving in his mom’s basement, trying to ignore the hard thump of her heel on the floor above him.

Julie Diamond was Ruth’s favorite bridge partner. Since moving back in with his mother he’d noticed that Ruth tended to cancel Thursday bridge parties if she couldn’t have Julie across the table from her. He knew she was one of his mom’s closest friends, but he hadn’t warmed to her. Like the rest of his mom’s new friends, he felt she was an imposter—an older parody of the women he remembered visiting the house when he was a child.

But Beautyman was no longer a child. He was a 41-year-old man currently hiding from company in the basement. And even he was getting a little embarrassed by his mother’s shouts and stomps.

Beautyman pressed a key on the computer keyboard that sent his screen into lockdown. Now only a 20-digit password would unlock the computer. It would take the Feds, or anyone else for that matter, years to crack through the 256-bit cipher to gain access.

He stood and grabbed a ticket to the Vikings game later that night. It wasn’t for another couple hours but he would use the game as an excuse to leave if he needed to.

“There you are, Arthur. I thought you were ignoring me,” Ruth said as her son appeared in the doorway to the kitchen.

“I had my headphones on, Mom,” Beautyman answered. He kissed the top of her head and went to the cabinet. “Would you care for a drink, Mrs. Diamond?” he asked, pulling a glass out.

“Good heavens, she’s been sitting here for two hours and you think I haven’t offered her something?” Ruth asked.

“I’m fine, thank you, Arthur. Ruth made me some tea,” Julie answered.

Beautyman looked over at her as he filled his glass from the sink. She didn’t look fine. In fact, he might have guessed that she had been sitting at the table for two hours without even a glass of water. Her skin was ghastly pale and an uneven application of makeup couldn’t hide it. Over her head she wore a bright red turban, tight against her temples with not a hair showing underneath it.

“You like it?” Julie asked, putting her hand to her head. “It’s a little like that poem. I figured if I had to wear something right now it should at least be pretty, right?” She gave a small forced laugh, and Beautyman was impressed she could muster that.

He sat at the table across from her and rested his forearms on the cool Formica surface. “I do like it. It looks warm too.”

“I’ve lived in Minnesota all my life but I had no understanding of how cold it actually was. Without my hair the chill just cuts through me.” Julie looked down at her teacup. Beautyman couldn’t tell whether she expected a response and without one, the room fell into an awkward silence.

“She has a case for you,” Ruth said several seconds later.

Beautyman’s head snapped up in surprise. He’d assumed this was a social visit, that his mother had wanted him to spend 20 minutes with her friend avoiding the topic of pancreatic cancer. He hadn’t imagined that Julie Diamond was here to see him. Although wasn’t that exactly what his mother had been shouting?

He didn’t even know where to begin. “Ah … Mrs. Diamond, I don’t know what my mother’s told you—”

“That you were the best detective the Los Angeles Sheriff’s Department ever saw,” Ruth cut in. “It’s the truth and you know it.”

“You can be a detective here.”

She said it with the force of someone who had no idea what she was talking about, Beautyman thought. Like when she deleted the first chapter of her “memoirs” from the computer and insisted that he could bring them back. “I’m done with all that. No department is going to hire me after what happened.”

“I’m not asking you to join up again, Arthur. Just get your feet wet as a private detective and see if you still like it.”

For the second time in as many minutes, Beautyman couldn’t think of a response. Not that he’d mounted an elegant argument in the first place. For the last four months it felt like he was 16 and pleading with his mom to change his 10:00 curfew.

He sulked, barely tuning in as Ruth tried to convince Julie to unload her problem onto Beautyman. Clearly his involvement was his mother’s idea, he thought. Or maybe he’d put up too much of a fight in front of his mom’s friend. He winced.

“I’m sorry, Mrs. Diamond, my mother and I seem to have that fight more and more often,” he said. “But now you’ve got me curious.” It was a lame explanation partnered with a lame smile, but Julie stopped packing tissues into her purse. So maybe she did want his help.

“It’s my grandson, Jake. He’s been gone for so long … no one imagined we’d ever see him again.”

“When did he leave?” Beautyman asked.

“Three years ago. There was a note that made it sound like he … like he was going to drown himself in Lake Calhoun. When he disappeared the police searched the lake but there was no body, just his jacket. But we all knew. He’d been having such a hard time … We just knew that he had gone through with it.

“Since then we’ve had so much death visit our family. First Jake’s mom—my daughter-in-law Ellen. She died two years ago in a car accident. Then my diagnosis just a few months ago … it’s been too much. Nathan never came back like he promised—he’s on Wall Street doing who-knows-what. And May is in Europe thinking she’s getting cultured but probably just drinking a lot.”

“Nathan and May?” Beautyman asked.

“All grandchildren. Nate’s the oldest, then Jake, then May.”

He wished he had a pen to keep track of the names being thrown at him. He looked over at his mother to ask for one but saw that he needn’t have worried. She would know the names of Julie’s grandchildren as if they were her own.

“But my son Henry keeps pushing on,” she said, smiling fondly, as if his perseverance were a great in-joke. “He opens his restaurant tonight. If Ellen were around to see it I know she would have been so proud.”

Her voice cracked and Beautyman let her regain her composure without interruption.

“Jake named it, actually. Years ago when Henry first said he wanted to open a restaurant—and not just any restaurant, the finest restaurant in Minneapolis—it was Jake who suggested he name the restaurant Carat.” Julie smirked and Beautyman’s face mirrored hers, a habit formed in many interrogation rooms. Maybe he had something of a detective’s soul left in him.

“What an awful pun, Henry Diamond naming his first restaurant Carat,” Julie said. “But he thought the name had a certain flair, and after Jake disappeared, I don’t think there was any doubt what he was going to name it.

“We … we all thought it was behind us, I think. We’d each made peace with it, as best as we could. Until yesterday, when Jake came back into our lives.” Julie’s face suddenly collapsed into tears.

“He came home?” Beautyman was confused, and his mother’s startled look made a mockery out of any vain belief that he still was on his game. A good detective would have known what was coming next.

“Jake’s body was found yesterday,” Ruth said, her arm around her friend. “In Lake Calhoun.”

“They said he’d only been in the lake a couple hours before they found him,” Julie said, her nose red and sniffling. “A couple hours! That’s it. After being gone so long, after making us think he’d killed himself … he’s been alive? He’s been here? And now taken from us again. It’s like I’m living it all over again.” She started crying again. “I just want to know where he’s been the last three years, that’s all I want. Why did he do this to us?”