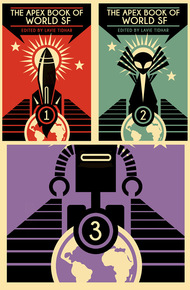 More than 80 short stories in four volumes spanning the globe and giving voices to authors outside of the United States, Canada, and the UK.

Beginning in 2009, we have been collecting the best of the world's short speculative fiction in these anthologies. Here you will find wonderful stories from the new generation of international writers, many of whom went on to win major genre awards and recognition in the past ten years. Collecting a mixture of science fiction, fantasy and horror, there is something here for everyone! – Lavie Tidhar

"The Wheel of Samsara"

Han Song is a Chinese science fiction writer of some note, and works as a journalist for the Xinhua News Agency. He won China's Galaxy Award four times for short fiction and is the author of several novels, including Red Ocean.

She travelled in Tibet and one day arrived at Doji lamasery. It was a small temple of Tibetan Buddhism, now in a bleak, half-ruined state. What caught her eye was a string of bronze wheels hung around the wall of the temple. They were called the Wheels of Samsara.

There was a total of one hundred and eight wheels, moving in the wind; they symbolised the eternal cycle of life and death, of everything. She quickly noticed that one of them was a strange colour of dark green, singling itself out from the others, which were yellow.

It was the thirty-sixth wheel when counted clockwise.

She touched the wheels one by one, and made a vow to Sakyamuni, the Great Buddha. Midway through, a sudden gale began to blow, and a heavy mist fell. She was scared and she ran back to the temple.

She stayed in the lamasery that night.

The gale continued and became a rainstorm. Thunder and flashes of lightning split the mountains and the sky. She could not fall asleep on such a night, and at midnight she thought she could hear the sob of the Tibetan plateau, which reminded her of her dead mother and her lonely father on Mars.

Suddenly, she heard a cry.

It was a miserable sound, weak as a hairspring and harsh as a woman's weeping, and it made her think of a ghost.

Fear stopped her own cry.

Though she knew lamas were sleeping in the next room, she didn't dare to go out or shout for help.

Winds and rain died out the next day and it became sunny. She told the lamas what she had heard the previous night.

They grinned, telling her it was not a ghost. "It was the howl of the wheel of Samsara," they said.

The howl of the Wheel of Samsara? She was surprised.

The lamas explained that it was one of the wheels. To be exact, it was the thirty-sixth clockwise. According to the lamas, Doji lamasery had been destroyed several times in the past five hundred years. Each time, the wheels were lost, and only the thirty-sixth one had been well-preserved to date. Though it disappeared in a number of landslides and floods, it was finally re-discovered. When gales and rain approached, it gave out unexplainable sounds.

So she looked at it carefully, but it kept silent. She touched it with her forefinger, and it emitted a sense of bleak dread, which flooded directly into her heart.

It was hard to imagine that it was the wheel that had cried the previous night.

"It was a wheel of soul," a lama murmured.

The lama's face was dark, his expression cryptic.

So it was an unusual wheel that had encountered so much rain, so many winds, but now it had to join such a string of ordinary wheels. Realizing this fact, she could not hold back her tears.

She returned to Mars and told her father about her finding in Tibet.

Father laughed and said, "Could that be called strange? The phenomenon was simply caused by static electricity on that remote blue planet."

Her father, a scientist, knew a lot of cases like that.

For instance, some valleys would emit the sounds of horses and dead soldiers in rainstorms, and some lakes would play music in the evenings. Documents even recorded a bronze bell in an ancient temple that could ring without anybody striking it.

"Once the air accumulates too much static electricity, it triggers the strange sounds. All this can happen at any moment on Earth. Never be scared, my daughter."

She felt relieved, but also dull, and lost. Father's explanation expelled her fear, but also cheated her of the mystery she craved.

In her mind, there should be some sort of ghost in Tibet, who would frighten her, perhaps, but wouldn't disappoint her. She went back to her own room and shut the door. Without any reason, she was out of sorts. She turned a cold shoulder to her father when he called her to dinner.

The next year, she went to Tibet again and made her way directly to Doji lamasery.

"You came for the wheel, right?" the lamas said, grinning, and winked their pearl-like eyes, which could see through everything.

She felt a little timid, and told them about the static electricity theory. However, she was afraid that they would be unhappy with the explanation.

So she added, "That was just my father's view."

The lamas did not feel unhappy. They smiled. "Last time you stayed here for only one night. So you could hear just one sort of sound. The wheel can send out thousands of different sounds. How can static electricity do that?"

Her heart jumped to her throat again, and she felt a mysterious shadow following her closely. She quickly forgot her father's words. She did not feel scared this time, and decided to stay in the temple.

The wheel cried again on a dismal night. This time it was not a ghost cry, but the sound of a man. Then it became the zigzag of vehicles, then the roaring of machines in a factory. After a whilst, a string of explosions were heard.

For several consecutive nights, she heard many different sounds.

One night it was a piece of music, but the tune was strange, of a kind she had never heard before.

She felt joy mixed with a bit of fear. One month passed.

The lamas saw it with equanimity. And they explained no more to her.

The day she left Doji lamasery, she carried back with her a bag of tapes.