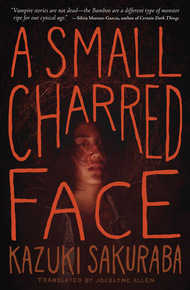 Kazuki Sakuraba was born in 1971. She began publishing while still in college. Her early Gosick light novels were best sellers and were translated into English, and her adult fiction is also popular and critically acclaimed. Red Girls won the Mystery Writers of Japan Award in 2007 and was translated into English in 2015. Watashi no otoko, a suspense novel about an incestuous relationship, won the Naoki Prize for popular fiction in 2008.

What are the Bamboo?
They are from China.
They look just like us.
They live by night.
They drink human lifeblood but otherwise keep their distance.
And every century, they grow white blooming flowers.

A boy named Kyo is saved from the precipice of death by a Bamboo, a vampire born of the tall grasses. They start an enjoyable yet strange shared life together, Kyo and the gentle Bamboo. But for Bamboo, communication with human beings is the greatest sin.

A vampire novel like no other, Kazuki Sakuraba's A Small, Charred Face tells of the Bamboo, an ancient race of vampires who have settled in Japan, and of the humans who fall into their orbit. Its three interconnected tales are shocking, surprising and tender in turn – proving there's plenty of life yet in the undead. – Lavie Tidhar

The fog's thick tonight. A good night for hunting!

I stood atop the telephone pole on one leg and looked down on the road below. The flashing lights. The downtown back alleys. Everything stained and sooty.

A golden cat raced by, a stray. It was of a foreign breed and had probably been pretty expensive. A man and a woman strolled past it from the other direction. A sleepy-looking middle-aged man and a skinnyish girl wearing glasses. The man was saying something. The girl nodded at the right moment and lifted her eyes my way for a second. A winter wind blew and set her scarf flapping uneasily.

That gust pushed the fog away, and the moonlight from above threw me into sharp relief on top of the telephone pole—a girl standing on one leg, a scarecrow. I winked and waved saucily with my right hand at the girl below. I didn't have a left arm, so the sleeve of my coat fluttered emptily.

When her eyes found me, Momo—"peach"—nodded with what looked like relief. Her lips moved. Ma. Ri. Ka.

The gusts of air carried with them the hustle and bustle of the main street, the flirting lilts of the girls, the rough singsong of the drunks. Pounding music wound its way toward us. The honking of an irritated driver.

I'm jumping! The wind roared in my ears. Sudden drop! Night bird style! I had been living for more than a hundred years as a Bamboo, so I was used to this by now.

From behind, I swept down toward the strange man walking alongside Momo. Going into stealth mode, even my breath subsonic, I flew in at a low altitude, almost crawling forward, my belly scraping air. My long black hair flew up like a mane around me. The hem of my trailing black coat flapped and fluttered, the cloak of the god of death herself.

"…Having lived this long, I think human beings…life is a series of choices…I don't regret anything…But…sometimes, well." The man was speaking passionately about something.

I drew in quite close, nodding slyly with a serious look on my face. Seeing me, Momo sneered secretly from behind her black-framed glasses. A small smile, malicious and mischievous, but somehow timid.

"I have no regrets, but…I guess it was just after I turned forty. I started thinking that life gets revenge on you for the choices you made in the past. Like, if you hadn't done this that time, it would've turned out like this, you know? Every day was like that."

"You said before," Momo replied, in a quiet voice, "that you didn't go out with anyone in high school."

"Yeah. I thought I was fine with that. But now, that choice is really getting its revenge. Which is why I'm doing this with a young girl like you," he said, turning back toward Momo.

And then, in the blink of an eye, a third head between their two. He finally noticed my presence and took a sharp breath. Whatever else I might be, I'm Bamboo, so I offered up a creepy smile, very aware of my monstrous appearance.

The man stared at me, long and hard. He then looked at Momo, comparing my face with her suddenly demure look. "Ha?" He let out a shallow breath.

I'm way cuter than Momo. My eyes are wide in the center, round, with a particularly sharp outline. Before all this happened to me, I was probably not bad looking. But now the tip of my nose had been shaved into a pointed blade, two small holes peeking out from below, and when the wind picked my hair up, you could see my left ear had also been cut off, gone forever. My left arm had been ripped off too. I don't show up in mirrors, so I haven't seen myself in a while, but when I show myself like this, pretty much everyone…

…screams like that, so I'm fairly certain I'm pretty frightening now. Although Momo seemed fine with the way I looked. Maybe she was just used to it, though.

The man pitched forward, almost falling in his attempt at escape. I watched him go, still hovering about twenty centimeters off the ground. I mean, this kind of thrill's the whole point of the hunt! Beside me, Momo yawned very deliberately as if to make that point. I guess it was already time for her to go to bed. That yawn was basically like she was telling me not to have fun with this, to just hurry up. So I'd better get to it then.

I kicked at the air and flew. I stretched out my right arm and left leg. Sudden ascent! And then sudden descent, spinning at high speed, tumbling! Thwk! I landed in front of the running man, and I slowly looked back at him, the hem of my long coat flapping.

The man looked even more surprised, almost like a small child, an innocent. His face said he couldn't believe this was happening to him. He hadn't done anything wrong. He believed that nothing bad could ever happen to him.

A hundred years since then. And I'll never get used to seeing it. I can't help but get excited. The look on his face. In his eyes. Dear God. It's like I'll never be able to tear my eyes away from this. A hundred years, and still…

I sprang up and perched like a bird on his solid shoulder. I chopped my heel into the back of his neck, bringing it down like a judge's gavel. The man crumpled to the ground with a thud.

The ephemeral flickering of the electric lights. The alley of the shopping district. The foggy night. Cold. Cold. Very.

Momo approached sluggishly, took the man's wrist, stuck the needle in, almost bored with the familiarity of the act, and drew out the arterial blood. The syringe comically large, like our bodies had gotten smaller.

The man grew pale. "Unnh," he groaned, regaining consciousness. "W-why kill me? If it's my wallet…take it!"

"Yes. Naturally, we'll also be accepting your wallet," Momo said, calmly. She was so collected, a doctor in the making.

"Oh, we simply must have it," Momo said, giggling softly. She was having fun, a mischievous child up to no good. Adopting a singsong tone, she chanted, "Weee are a paaaair of wannabeeeee gods of death. That. Is. Why!"