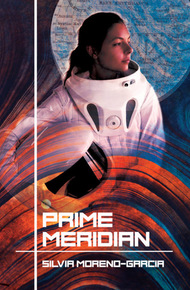 Silvia Moreno-Garcia is the New York Times bestselling author of the novelsMexican Gothic,Gods of Jade and Shadow,Certain Dark Things,Untamed Shore, and a bunch of other books. She has also edited several anthologies, including the World Fantasy Award-winningShe Walks in Shadows(a.k.a.Cthulhu's Daughters). Find her at www.silviamoreno-garcia.com and on Twitter @silviamg

Amelia dreams of Mars. The Mars of the movies and the imagination, an endless bastion of opportunities for a colonist with some guts. But she's trapped in Mexico City, enduring the drudgery of an unkind metropolis, working as a rent-a-friend, selling her blood to old folks with money who hope to rejuvenate themselves with it, enacting a fractured love story. And yet there's Mars, at the edge of the silver screen, of life.

I love this short book, a perfect example of mundane SF set in an alternate near-future Mexico City, where a young woman years for the stars. Already reprinted in Gardner Dozois' Year's Best Science Fiction, you know this is good. One of my favourites of last year! – Lavie Tidhar

Why did I have to poison myself with love?

— Aelita, or The Decline of Mars, Alexei Tolstoi

The subway station was a dud. Both of its entrances had once again been commandeered by a street gang that morning, which meant you'd have to pay a small 'fee' in order to catch your train. Amelia was tempted to fork over the cash, but you never knew if these assholes were also going to help themselves to your purse, your cell phone, and whatever the hell else they wanted.

That meant she had to choose between a shared ride and the bus. Amelia didn't like either option. The bus was cheap. It would also take forever for it to reach Coyoacán. The car could also take a while, depending on how many people hailed it, but it would no doubt move faster.

Amelia was supposed to meet Fernanda for lunch the next day and she needed to ensure she had enough money to pay for her meal. Fernanda was loaded, and odds were she'd cover it all, but Amelia didn't want to risk it in case Fernanda wasn't feeling generous.

The most sensible thing to do, considering this, was to take the bus. Problem was, she had the booking and if she didn't check in by five o'clock, she'd be penalized, a percentage of her earnings deducted. The damned app had a geolocator function. Amelia couldn't lie and claim she'd reached the house on time.

Amelia gave the gang members standing by the subway station's entrance a long glare and took out her cell phone.

Five minutes later, her ride arrived. She was glad to discover there was only one other person in the car. Last time she'd taken a shared ride, she sat together with four people, including a woman with a baby, the cries of the child deafening Amelia.

Amelia boarded the car and gave the other passenger a polite nod. The man hardly returned it. He was wearing a gray suit and carried a briefcase, which he clutched with one hand while he held up his cell phone in the other. You heard all these stories about how the ride shares were dangerous — you could get into a car and be mugged, express kidnapped, or raped — but Amelia wasn't going to pay for a damned secure taxi and this guy, at least, didn't look like he was going to pull a gun on her. He was too busy yakking on the phone.

They made good progress despite the usual insanity of Mexico City's traffic. In Europe, there were automated cars roaming the cities, but here drivers still had a job. They couldn't automate that, not with the chaotic fuckery of the roads.

Mars is home to the tallest mountain in the solar system. Olympus Mons, 21 km high and 600 km in diameter, she told herself as the driver honked the horn. Sometimes, she repeated the Mandarin words she knew, but it was mostly facts about the Red Planet. To remind herself it was real, it existed, it was there.

Once they approached the old square in Coyoacán, Amelia jumped out of the car. No point in staying inside; the vehicle moved at a snail's pace. The cobblestone streets in this borough were never made to bear the multitudes that now walked through the once-small village.

The square that marked the center of old Coyoacán was chock-full of street vendors frying churros and gorditas, or offering bags emblazoned with the face of Frida Kahlo and acrylic rebozos made in China. Folkloric bullshit.

Amelia took a side street, where the traditional pulquerias had been substituted with fusion restaurants. Korean-Mexican. French-Mexican. Whatever-Mexican. Mexican-Mexican was never enough. A couple of more blocks and she reached Lucía's home with five minutes to spare, thank-fucking-God.

Lucía's house was not an ordinary house, but a full-fledge casona, a historical marvel that looked like it was out of a movie, with wrought iron bars on the windows and an interior patio crammed with potted plants. The inside was much of the same: rustic tables and hand-painted talavera. It screamed Colonial, provincial, nostalgia and also fake. There was an artificial, too-calculated, too-overdone quality to each and every corner of the house, an unintended clue that the owner had once been an actress.

Amelia knew the drill. She went into the living room with its enormous screen and sat on one of the couches. Lucía was already there. The woman drank nothing except mineral water with a wedge of lime. The first time Amelia had visited her, she had made the mistake of asking for a Diet Coke, which earned her a raised eyebrow and a mineral water, because fuck you, Lucía Madrigal said what you drank and what you ate (nothing, most times, although twice, little bowls with pomegranate seeds had been placed on the table by the couches).

That day, there were no pomegranates, only the mineral water and Lucía, dressed in a bright green dress with a matching turban, the kind Elizabeth Taylor wore in the 70s. That had been Lucía's heyday and she had not acclimated to modern dress styles, preferring tacky drama to demure senior citizen clothes.

"Today, we are going to watch my second movie. The Mars picture. I was quite young when this came out in '65, so it's not one of my best roles," Lucía declared with such aplomb one might have believed she had been a real actress, instead of a middling starlet who got lucky and married a filthy rich politician.

Amelia nodded. She had little interest in Lucía's movies, but her job was not to offer commentary. It was to simply sit and watch. Sometimes, it was to sit and listen. Lucía liked to go on about the film stars she'd met in decades past or the autobiography she was writing. As long as Amelia kept her eyes open and her mouth shut, she'd get a good rating on Friendrr and her due payment, minus the 20% commission for the broker. There were other apps that functioned without a broker, but those were less reliable. You might arrive for your Friendrr session and discover the client was an absolute sleaze who wouldn't pay. Friendrr vetted the clients, asked for deposits, and charged more, which was good news.

The movie was short and confusing, as if it had been rewritten halfway through the production. The first half focused on a space ranger sent to check out a Martian outpost manned by a scientist and his lovely daughter. Lucía played the daughter, who wore 'futuristic' silver miniskirts. For its first half-hour, it played as a tame romance. Then space pirates, who looked suspiciously like they were wearing discarded clothes from a Mexican Revolution film, invaded the outpost. The pirates were under the command of a Space Queen who was obviously evil, due to the plunging neckline of her costume.

"It doesn't much look like the real Mars, I suppose," Lucía mused, "but then, I prefer it this way. The real Mars is bland compared to the one the set designer imagined. Have you seen the pictures of the colonies?"

"Yes," Amelia said, and although she knew only monosyllabics were required of her, she went on. "I want to go there, soon."

"To the Martian colonies?"

Lucía looked at the young woman. The actress had indulged in plastic surgery at several points during the 90s and her face seemed waxy. Time could not be stopped, though, and she had long abandoned attempts at surgery, botox and peels. What remained of her was like the core of a dead tree. Her eyebrows were non-existent, drawn with aplomb and a brown pencil. She perpetually sported a half-amused expression and a necklace, which she inevitably toyed with.

"Well, I suppose people are meant to go places," Lucía said. "But those colonies on Mars, they look as antiseptic and exciting as a box of baby wipes. Everything is white. Who ever heard of white as an exciting color?"

There was irony in this comment, since the movie they had just watched was in black-and-white, but Amelia nodded. Half an hour later, she took the bus back home.

When Amelia walked into the apartment, the television was on. Her sister and her youngest niece were on the couch, watching a reality TV show. Her other niece was probably on the bed, with her phone. Since there were two bedrooms and Amelia had to share a room with one of the girls, the only place where she could summon a modicum of privacy was the bathroom, but when she zipped toward there after a quiet 'hello,' Marta looked at her.

"I hope you're not thinking of taking a shower," her sister said. "Last month's water bill came in. It's very high."

"That's the fault of the people in the building next door," Amelia said. "You know they steal water from the tinacos."

Amelia did not reply. She changed course, headed into the bedroom, and slipped under the covers. On the other bed, her niece played a game on her cell phone. Its repetitive bop-bop sound allowed for neither sleep nor coherent thoughts.