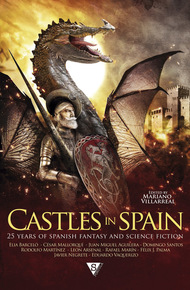 Castles in Spain by Mariano Villarreal

The world of Spanish speculative fiction has been working hard in recent years to introduce itself to the wider world. compiled by the indefatigable Mariano Villarreal, and featuring some of Spain's most important writers of the fantastic, including Elia Barceló and Félix J. Palma, this anthology is a great introduction to the vibrant world of modern Spanish fantastika. – Lavie Tidhar

We were all there. Lana, like a blonde doll hanging from puppet's strings, with a ridiculous red skirt and a thread of saliva glistening on a pale face; Lon, with eyes huge and dark in a nearly non-existent face; Sadie, fluttering a pair of wings dizzily, hovering a few centimetres off the ground while chewing that beloved green stuff with robotic efficiency; Tras, reduced to a tiny, almost vanishing fragile frame and desire fixed on the sky; and I, the fifth, the brooch that binds the star, atremble like an icicle of light, there to illuminate yearning. All of us, waiting.

We had waited so long. There was no reason to be more worried than on other occasions, but the tension had turned different and we felt that what we were waiting for was approaching. We could have just disappeared, of course, especially myself, but we were the contact star and we did not want to become lost in the vigil as others had before us.

We still did not know what to offer them; it had been so long since we'd lost contact that we no longer knew anything of their desire nor their vigil. 'We are wise and beautiful', Sadie had said, but only I understood the concept of singular reality and I knew it could all turn out painful for them.

'Slow', muttered Lana, who, after me, was the most verbal of the group.

'Yes', I replied, knowing how Lana liked to put into words what we all already knew.

I felt Lon's desire and began to illuminate an image for its eyes and ours: the endless blackness of what is outside and an artefact of singular reality, objectively white, slipping softly towards our vigil. Slow. Full of multiple realities without illumination.

'Slow', I repeated for Lana's sake.

We dissolved. Our surroundings started to turn blue and orange, somewhat melancholic, just like Tras. Soft. Ancient. We shifted in its perception and silver towers arose to a music of glass and tinkling bells. Sadie danced and I floated above them, attenuating the vigil. We made our way to a white tower that rose from a few metres above the general subjective ground and went in, in my case through the roof, the others through doors, windows and walls.

Lana said, 'Heat', and we all laughed, breaking the tension of the vigil. The room made us hot and Lon brought down a light bubbly rain, which ended up hanging from our bodies and being transformed into the desires of the star. Flowers, nails, lights, and sticky salty substances came up on Lana's body and Tras swept them up carefully with a vast blue tongue, translucent spheres containing images of expired realities. Lon, changing colour and shape, floated them over to me on the wings of wildly spinning Sadie.

Tras recovered the tongue and turned it halfway into a trail of colours, assembling a pyramid of scents and sending them, transformed into droplets of colour, out of a window:

A storm of speculation from another star enveloped us and we let it lead us on.

They want. What. We do not have. We cannot. For them. It is unacceptable. We are not acceptable. For them. Laughter. Laughter and changes and changes and transformations. Lana's skirt swelling to fill our space with threads of woven softness. Construct a singular reality. When they arrive. More laughter. Which. We cannot. Yes we can. Tedium. Tedium. Tedium. Singular reality. Absurd and monstrous. Until when. Curiosity. Why not. Try. Common effort. Laughter. Laughter. A game. What for. For them. Too hard. Boring. They do not understand.

We let it go. The speculation rolled away among other stars. A question for Lon, from all of us. Lon knows more than any of us about the other times. No. Tras knows more but doesn't like to show it. A flood of images falling upon us, and I am struggling to illuminate such a lot of things I do not understand.

A world of large, solid, strong beings that stay the same, sharing a singular reality, accepted in part out of convention, in part out of an incapacity to do without conceptual frameworks. A world of frightened beings made confident only by cerebral understanding of what they take to be reality. Beings who cannot or will not share their dreams, their changes and their whims, who cannot abandon the convention they have been developing down the ages of their existence, to whom the sweetness of channelling and focusing, and of the star, is unknown.

'All of them like that', asks Lana, flitting between green and mauve with a voice like metal scraping on stone.

'Some not', answers Lon, 'but they suffer. They are not unified.'

'And if they unify': an empathy unusual for Sadie.

'We were all like this before.' Tras is no more than a shred of bright fog in the room now dark.

'Before', Lana's arched body sparkles upon the void.

'Before us. Before the star. When this was the real world for them.' The flow from Tras to Lon is so dense it almost hurts. We fall back a bit; they feel it and relax.

'They will not understand us', says Lon. 'We will suffer, even disappear. They are strong.'

I feel the star's pain and desperately channel outward, towards the objective reality. The mountains outside shake and slowly crumble with a roar that I wipe from our perception. The dust lands mote by mote upon our tower which shrinks and turns into a soft-walled cave where electronic music hums. Tras makes us bodies of firm muscle and smooth skin and has us gallop through the night on big, silky-coated creatures between our parted legs. The sense of power is heady but vanishes sharply. Sadie and I glide over them and watch them end their race in a great sea of silvery foam. We make a forest and observe the moon's shine between its limbs, lulled by the murmur of the sea.

'It was like this before.' Lana sounds exquisite, a voice from the past, in a new white body, large and feminine (the word is Lon's, I don't know what it means but it is lovely): with long hair and eyes wide open.

'Long, long ago', answers Tras wordlessly. Time is difficult to express. 'There were changes. Like these.'

I know the image hurts Tras and I move closer to those feelings, merging and sustaining while Sadie and the others come, and Tras is transformed into an ecstasy.

The sea has turned greasy, it smells of loss and destruction; there is no forest, no plants. The soil is grey and black, incinerated. The feeling of fear and desperation is like a greenish yellow light. We hug each other, not daring to believe, not wanting to believe, that such a convention could be accepted for someone to exist.

'It was no convention', whispers Lon. 'They did it and then they could not change it. That is why they left.'

'We can.' Sadie leaves the star and turns the land into a weave of different coloured sheets that throw out sparks in cascades wherever they cross. Sadie is bathed in music and harmony. In happiness.

'We are not them', I say with a smile that strokes its essence with a fresh fleeting touch like a moist sea breeze.

'Yes we are', say Lon and Tras in unison. 'And they know it. That is why they will not understand.'

'Not them.' Tras and Lon embrace, frightened.

'We are beautiful and wise. We are happy. We are the star.' Sadie takes us upward and beyond, flying, circling, gliding, while Lana sings.

I illume, I illuminate joy, beauty, while we soar, we soar, we drown fear, we lose ourselves in the star, singing, soaring, forgetting, existing, transforming, waiting.