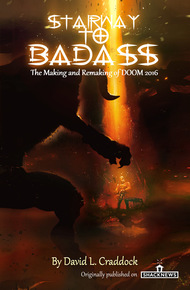 From the landmark original title to 2016's critically acclaimed reboot, id Software's Doom games have ground productivity and personal relationships to a halt since the Texas-based studio opened the floodgates to hell in December 1993.

Stairway to Badass: The Making and Remaking of Doom (2016) reveals the pitfalls and triumphs involved in reimagining id Software's groundbreaking shooter, and celebrates the exquisite map design, weapon balance, and community of one of gaming's most beloved franchises.

• Follow Doom 4 / "Doom 2016" co-directors Marty Stratton and Hugo Martin as they guide the game from concept to final product.
• Discover how id Software crafted the iconic weapons featured in Doom and Doom 2.
• Learn the secrets of level design from co-creator John Romero.
• Walk alongside map makers as they break down the tools and techniques used to build many of the community's favorite custom campaigns.
And more!

Craddock's customary wonderful level of detail shines through in this interview-heavy look at both the triumphant 2016 return of Doom, and the 1993 original - great stuff. – Simon Carless

Every Doom game cultivates certain instincts in players. Doom and Doom 2 bequeath upon them the agility and firepower they need to flit in and out of attacks, circling enemies and pumping them full of rockets and lead. Doom 3 advocates caution. Enemies can come from anywhere at any time, especially from behind, and when they emerge, players fall back on their heels.

"When all the AI attacked you, your first instinct was to run backwards and shoot into the pack," Doom 2016 co-director Marty Stratton said. "Guide them around the arena. We were like, 'This is not it.'"

With the new Doom, sometimes referred to as "Doom 2016" by fans to distinguish it from the original, Stratton and co-director Hugo Martin endeavored to create the fastest and wildest Doom gameplay loop yet.

"If we had 10 bucks to make the game, eight of it was devoted to combat," Martin added.

Doom 3 had faded far enough into the past for id's developers to examine it with a critical eye. Horror was an essential part of the franchise, and Doom 3 had steered harder into it than its predecessors. Very early on, the team wrestled with Doom 2016's division between horror and action. "[Consumers] gave us 60 bucks, so let them play how they want,'" Stratton said, referring to a golden rule of game development that id hesitated to break.

After several failed experiments, they faced facts. Doom, as a franchise, was equivocal. There was nothing objectively wrong with Doom 3's tenser, more defensive slant on gameplay and atmosphere. However, they had no desire for their Doom to treat shadows as places to hide and monsters as boogiemen. "It fundamentally ruined that power fantasy, the idea that you are a badass and you're taking the fight to them," Stratton continued.

"You kite enemies into doors when you're weak," Martin said. "That's the solution when the odds are overwhelming. The Terminator isn't kiting bad guys in doorways; the Terminator is running around slaughtering people."

Doom's developers likened their game to chess. Each level is a game board, the player and monsters the pieces. They knew the basic rules they wanted to promote: be aggressive, be fast, shoot first and ask questions later. The next step was figuring out how to implement them.

"We hadn't determined the rules for how the pieces move," Stratton added. "Everybody was all over the board, and it didn't work. It wasn't fun. We needed to develop rules for individual pieces and play into the whole. That took the whole project. We never stopped working on that and making it better."

Glory Kills gave the team its big break. Early in development, several artists collaborated on a short animation that showed players executing a flurry of melee attacks on wounded monsters—like Fatalities in Mortal Kombat, but quick and brutal, intended more for efficiency than showmanship.

"That really proved that push-forward combat, Glory Kills—that tight gameplay loop was super fun," Stratton recalled of the proof of concept. "We knew it was going to be good. It was good to get one foot up the ladder very early on."

Glory Kills were not an original concept. "This started in the older version of Doom, the one they called Call of Doom," Martin explained. "They had this sick melee thing where you went up to a guy and did a bunch of stuff to fuck him up. And it was really cool, but it was slow. It was more drawn out."

Monsters must be wounded before players can perform a Glory Kill. Brought to the brink of death, a monster begins flashing and lurching. Players need only approach them and press a single key or button. A burst of violence—ripping off an Imp's lower jaw and punching it in the face, tearing off a Baron of Hell's horn and jamming it into its eye, driving a zombie's skull into the ground—and the enemy crumples and players set off again, speeding toward their next target.

"There are several components that make it work," said Martin. "It makes you feel powerful. It pulls you into the action, so as a general concept it takes the fight to the bad guys. Add the fact that health drops out of them and it's an integral part of the dance. It's an important part of the whole game [loop]."

Fear is a vital component of the Glory Kill system, but not in a fashion typical of Doom. Many players confessed to playing Doom 3 in fits and starts. Its enemies were too frightening, their chests constricted with dread, for longer play sessions. Even older Doom games turned players into prey, such as when beaten and bloodied with no health or armor refills in sight, leaving players no choice but to run away and snipe at enemies from behind walls. Doom 2016's Glory Kills turned the tables by casting players in the role of the hunter.

"At your moments where you're closest to the demons and have put them in their most vulnerable position," Stratton explained, "you've absolutely created fear in them. They're in full-on, screaming, oh-my-God-I'm-going-to-die terror. I don't know that most players would call that out as a moment, but it was, and it really did guide everything."

"I don't know how many times we sat in meetings where it went up and down," Martin reiterated of the process of nailing down Doom's combat. "It would be right, and then all of a sudden you'd play one day, and all of a sudden [monsters] start chasing you and you're running backward and shooting. You felt like you were being chased by a pack of dogs, so we'd tune it."

Glory Kills add percussion to Doom 2016's symphony of violence. Martin, a film buff long before he broke into Hollywood, gleaned inspiration from how Jackie Chan frames and choreographs fight scenes—blending lightning-fast action and physical comedy to create a seamless rhythm step by step, move by move, with sounds added in post-production that make each slap, kick, and thud really pop for the audience.2

"If you watch any good martial arts film, you'll notice that," Martin said. "We can all picture it in our minds: Bruce Lee movies and kung fu movies, the wind from their punches and the sound they make when they block versus when they connect. It's very rhythmic. We wanted the Glory Kills to kind of feel that way."

Glory Kills happen in two beats. BOP-BOP. Monster dead. In Doom 2016, quicker is always better. In point of fact, monsters remain prone to Glory Kills only for a few seconds, spurring players to pour on speed. Dally, and monsters shake off their stupor and return to the fray.

Then there are Runes, passive items that affect gameplay in numerous ways. The Blood Fueled rune ratchets up the player's speed after executing a Glory Kill, and Savagery gives them an even bigger boost.

"Some people were like, 'These are going to slow down the fight!'" Martin remembered. "I'm like, first of all they're fast to begin with, but if you equip that rune that makes them faster, and you master that rune, they're lightning fast. They're almost too fast."

Executed demons break open like shattered piñatas, spilling bits of health over the ground—perhaps the most significant layer of Glory Kills. In most games, classic Doom included, weakened players flee from combat. Glory Kills reward aggression by healing players who take a risk and wade into the thick of battle.

Earning health for Glory Kills prompted more iteration. "It gave them a lot of meaning," Martin continued. "Then it was a balance of how much health. Then it was about, okay, so if I can get health for doing this, how much health should I get from shooting guys? What's the balance there? Should we penalize players for shooting guys? Does everything have to end in Glory Kills?"

The team arrived at a comfortable balance of health distribution. Med packs, another classic trope, are sprinkled around each level for players who need them in a pinch, while Glory Kills convert demons into a healing source.

More than finding the beating heart of Doom's gameplay loop, Glory Kills signified a turning point in the project's long and troubled development. Veterans leaving, uncertainty over how involved ZeniMax may or may not be, worry that ignoring market trends might lead to financial missteps—all of that was in the past. Like their player-character, Doom's team was racing forward, full stop.

"It was very, very important for the team," said Martin, "and for Marty and me to push the three components of the team together: art, design, and tech. You didn't want people making things in isolation, which always happens. The animators get really into doing these really cool Glory-Kill animations, but then maybe the systems guys are going off in another direction where they're not really pushing a lot of the progression items into Glory Kills. They're not complementing or accounting for Glory Kills as much as we would have liked them to."