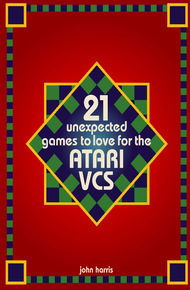 The Atari VCS (also known as the 2600) is a console from a lost era, made to recreate simple ball-and-paddle games , most of the time working in a way greatly different than its designers intended. When it first appeared, its biggest competition was the forgotten Coleco Telstar series; when it stopped production, the SNES was well underway. During the fifteen years of its life it went from simple tank games to simulating expensive framebuffer hardware, presenting a surprisingly full-featured RPG, representing large exploratory environments, and much more. This book is a celebration, of the earliest days of gaming, of the skill of programmers forced to learn on the job, of making due with what you have, and of doing things far, far beyond what's expected of you.

Specially commissioned for this bundle, Harris goes arcanely, wonderfully deep on Atari 2600 titles from E.T. The Extraterrestrial to Jr. Pac-Man and far beyond. – Simon Carless

One of the many obstacles Robinett had to overcome in constructing Adventure was what to do about the VCS' limited control setup. The joystick controller was made for simple games like Combat. Adventure games are fundamentally about object manipulation. How can you meaningfully manipulate an object when you only have one button? Robinett's answer was, pick one use for it (to drop something you've picked up) and have everything else be implied by the player's motion. To pick up an object, just walk into it. To use it to kill a dragon, maneuver a carried sword into it. To place a bridge, move so that it's in the right place then press the button to drop it. To unlock or lock a door, move a carried key of the right color into it.

These uses are made possible by two specific aspects of Adventure's engine, these two aspects making all the gameplay possible. First, carried objects are not removed from the screen, but move with the player, and even remain in the same orientation that they were in when the player touched them. If the sword is to the right of the player when collected, it'll remain to the right of the player until they drop it by pressing the button. If you'd rather hold the sword to your left, just drop the sword, walk around it to the other side, and pick it up again. Intuitive and flexible.

The second essential aspect builds off the first. It is that the player doesn't really do anything themself except move, pick up and drop things. All the other abilities of the player are the natural result of a carried object's location. All the objects in Adventure operate naturally, whether the player is carrying them or not. The sword has the power to kill dragons even if the player isn't touching it. If the bat picks up a key, it can lock or unlock doors if it happens to collide with them. The magnet will attract objects whether the player is nearby or not. The player makes effective use of these objects by simply moving them into a location where their ambient functions suit his purposes. Similarly, if the bat (a mischievous monster that moves objects around) places an object like a dragon in an unfortunate location, it can create an unexpected challenge for the player, or it might happen to drop the sword between you and a dragon, causing it to flee.