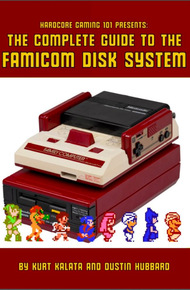 Dustin Hubbard is a video game preservationist, romhacker, and former webmaster of the Dragon Warrior/Quest Shrine from Oklahoma. His passion is working towards preserving and sharing often overlooked Japanese computer and console games before it's too late, which can be seen on his website Gaming Alexandria.

HG101 Presents: The Complete Guide to the Famicom Disk System by Kurt Kalata and Dustin Hubbard

Released in 1986, the Famicom Disk System was an attachment for Nintendo's 8-bit console that allowed for cheap distribution of re-writable games. Many famous titles, including both Legend of Zelda titles, Super Mario Bros. 2, Doki Doki Panic, Metroid, and Kid Icarus were originally released for the platform. Due to technical advances, the system was eventually discontinued and was never released outside of Japan. Much of its library remained Japan-only as well, and has been sparsely documented among the English-speaking retro game world.

Until now. Brought you to by long-standing retro video game website Hardcore Gaming 101, The Complete Guide to the Famicom Disk System includes reviews of every single title in the Famicom Disk System library - all of the classic Nintendo games (including their unfortunately overlooked adventure games), cult classics by Konami, revolutionary oddities like Otocky, many Zelda clones, numerous tie-ins with late 80s Japanese celebrities, and a large number of subpar licensed games from Bandai. Also includes a look at the many unlicensed titles, a history of the system, and its accessories.

The NES' floppy disc add-on has always been difficult to source and understand in the West, so this complete guide from the HardcoreGaming101 crew is invaluable! – Simon Carless

The Famicom Disk System was released in February 1986, solely in Japan, and was initially sold for 15,000 yen (equivalent to $100 US at the time). This contrasts to the price of the Famicom in 1983, which was 14,800 yen, about the same price. It primarily consists of two pieces of hardware ? the disk drive itself and the RAM adapter, which connects to the cartridge slot of the Famicom. The disk drive requires another power source, so it supports the use of an AC adapter. Nintendo realized, however, that most power outlets only have two plugs, which would already be used by a television and the Famicom itself, so the FDS can be powered by batteries, too ? six C-batteries, to be precise. The battery slot actually comprises the bulk of the unit, and it's quite light without it. Many pictures show the Famicom on top to the disk drive, though this is not required, as it can be positioned in pretty much any way, as long as the wires from the RAM adapter can be connected to the disk drive. Sharp licensed the technology and issued a two-in-one unit called the Twin Famicom, which also has the benefit of composite video output.

The launch titles for the FDS were simple, mostly stuff already available in cartridge format ? Baseball, Golf, Mahjong, Soccer, Super Mario Bros., and Tennis. The selling piece of the system, though, was Zelda no Densetsu (The Legend of Zelda), an exclusive game that showed off what the hardware could do. In Japan, its slogan was "Yareba Yaruhodo Disk System", which means "If you play, play more, Disk System". The mascot is a little yellow disk with eyes called Disk-kun, and the official term for the format is "disk cards".

So why was the Famicom Disk System released? What were its biggest advantages? The most obvious reason was simple: price. ROM chips were still quite expensive in the mid-80s, especially for a product that was primarily aimed at children. On the other hand, floppy disks were significantly cheaper. After the initial investment of a Disk System, games could be purchased for about 3000 yen, nearly half of what cartridge games cost. Furthermore, many department stores had Disk Writer systems. Blank disks cost 2000 yen, and could be rewritten as long as they weren't broken. Rewriting a game only cost 500 yen, so this was a great deal, especially for children without much money. This unique delivery format also got around Japan's anti-game rental restrictions. Nintendo later used the same concept of the Disk Writer for their Nintendo Power system (unrelated to the American magazine), which they used for Super Famicom and Game Boy games.