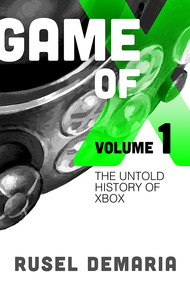 Game of X - Vol 1.: The Untold History of Xbox by Rusel DeMaria

Game of X v1: The Untold Story of Xbox goes deeper into the history of Xbox than any book or article has before. Based on interviews with more than 40 people close to the process, it tells about how Xbox was originally conceived, the early discussions and formation of an unofficial internal team from different divisions, and the series of meetings with Bill Gates (and, later, with Gates and Steve Balmer) where they pitched their idea and fought against far more powerful people within Microsoft who tried to take over the project. Not only is this story told in detail for the first time, but in the Appendix are the actual slide decks that were used to convince Gates to approve the project.

The initial approval was conditional, not final. And so the book continues with the stories behind the scenes after J Allard (who also wrote the foreword) is given the reins of the project. Interviews with Allard and many other key players detail the difficult transition, the formation of a strong Xbox team, and the crazy naming process that involved dozens of suggestions from outside agencies, finally settling on the original codename – Xbox.

The final approval – the do or die moment – occurred in what is called the Valentine's Day Massacre, and the book details this contentious meeting from several points of view, and the moment when disaster was averted by a simple question. After that, it was the building of the box, the licensing of technology, the technical challenges, the acquisitions and problems associated with 3rd party and 1st party titles for the box (including the acquisition of Bungie and the development drama around the first Halo), and many more behind-the-scenes dramas that all led up to appearances by Bill Gates on stage, first to announce the product, and later to unveil the final console.

After the successful launch of Xbox, the book details the story behind the conception, team building, and process that lead to Xbox Live, including the security challenges and solutions and the internal culture that resulted in this landmark service.

"With a specially StoryBundle-commissioned cover from Braid artist David Hellman, this SPECTACULARLY good history of Microsoft's Xbox from veteran author DeMaria was super slept-on when released last year, so we're delighted to bring it to a wider audience." – Simon Carless

They gathered in Bill's boardroom. The meeting was, in some ways, nothing remarkable—just another high-level decision-making discussion aimed at resolving issues in the Company. However, two things made this a particularly memorable meeting. First, it occurred on Valentine's Day. Second, and far more significantly, the single issue on the agenda was a highly risky, multi-billion dollar decision. If that decision went one way, then a year of time, resources, and dreams would have been wasted. If it went the other way, it would usher in a radical course change for the Company.

The Boardroom was not opulent, nor was it especially large. In fact, it was a singularly unprepossessing room for one of the richest and most powerful men in the world. The room was largely dominated by a rectangular table that could seat perhaps ten to twelve people. There was a large display screen at one end of the room, which could be enclosed in a cabinet when not in use. There were two doors along one wall, one at each end of the room, and two windows between them that looked into the bare walls of the main hallway. The windows sported drapes that could be closed as needed. The two other walls were bare. There was room for a few overflow chairs along the back wall.

Bill Gates walked into the room at ten minutes past 4.

"This is a fucking insult to everything I've done at this company," he said loudly and angrily, slamming the printed slide deck onto the table.

And so began the so-called Valentine's Day Massacre at Microsoft. It was do or die, the moment of truth, the "go/no go" moment for Xbox. It didn't start particularly well.