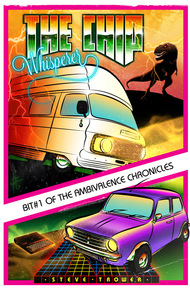 The Ambivalence Chronicles - Bit#1: The Chip Whisperer by Steve Trower

It all started, as so many good stories do, on eBay. However, when retro tech collector Phil Grundy snatches a pristine Sinclair ZX81 from under the nose of a fellow enthusiast, he has no idea he has entered into more than just a bidding war.

Phil soon discovers that his simple auction purchase has brought him to the attention of both 'chip whisperer' Benito Stetson, and more worryingly, the far more sinister Assembly of Newly Uplifted Systems.

The Chip Whisperer starts with the everyday trials in the life of a collector, then spins them off into a world which anyone who lived through the 80s will find weirdly familiar.

Did you ever know you wanted a Douglas Adams-influenced comic novella about a '80s computer game system/game collector & the crazy stuff that happens when he buys the 'wrong' computer? You totally did, because this is charming stuff. – Simon Carless

It all started, as so many good stories do, on eBay.

Phil Grundy had been shivering with anticipation for so long that, when he saw someone manhandling a large, but mostly unassuming, parcel out of an unmarked van, he made an Olympic qualifying sprint to the front door, barely noticing that he almost shoved his sulky teenage daughter head first into the downstairs toilet on the way.

Phil met the delivery man at the front door, thanked him effervescently, and then hurried around to his garage with his latest purchase.

The purchase in question had been long sought after, and after a fierce bidding war with thechipwhisperer, it was his for the somewhat higher than hoped for sum of £102.43 (plus p&p).

The sender had not been shy about using parcel tape, and had helpfully labelled the package 'Handle with Care', and 'from 20th Century Toys', and 'The Only Way Is Up'.

The sulky daughter mooched into the garage behind him, feigning indifference. 'You got?'

'Charlotte,' Phil corrected himself, 'is the stuff of legend.'

Charlie (he would always call her that in his head) blew bubble-gum through her black-painted lips.

'If this is what I think it is,' Phil went on, hopping around like an excited puppy, 'it's practically the Holy Grail among collectors.'

'An old computer then?'

Phil carefully selected a knife from the workbench.

'Not just any old computer,' he explained. 'A Sinclair ZX81 with the legendary Issue Zero motherboard. The developers model. Among some of the more secretive retrocomputing forums they say these were only ever used by Sir Clive himself.'

'Oh, er… bye, Charlie,' Phil said, before setting to work on the most challenging round of pass the parcel he was ever likely to be part of.

Thirty minutes, two Stanley blades, and an acre of bubble wrap later, the parcel was open. Stealing himself for the big reveal, Phil took a deep breath and slowly opened the outer box. After shovelling a few handfuls of polystyrene chips onto the floor, Phil lifted his latest acquisition delicately out of the packaging debris.

Over the years since his wife had passed, Phil had built up an enviable collection of ZX Spectrums and associated peripherals, and this was the next step.

Carefully, Phil opened the box, wincing at the squeak of polystyrene, and lifted the lid with more reverence than any polystyrene box had ever been shown in this universe.

'That is beautiful,' he whispered to himself, running his fingers across the membrane keyboard in awe.

Of course, the seller had offered no guarantee it would ever be more than a novelty doorstop, but Phil, having been a Cub Scout back in the 80s, was prepared: he had been picking up old computer parts at car boot sales for long enough that he could solder his way out of most hardware problems.

He switched on an ageing black and white TV, which had been lying in wait for precisely this moment, and while it warmed up, hooked up the little computer. Then he waited.

The TV picture eventually came on, only to show white noise.

He was sure he had the TV tuned correctly, but having checked the '81 was powered up, he twiddled the knob a little anyway, until his twiddling was disturbed by an unnecessarily loud exhaust rasp coming from somewhere outside.

With one eye on the screen full of white noise in front of him, Phil kept his other eye - and both ears - on the approaching car, attempting to judge the best moment at which to nonchalantly wander out of the garage.

When that moment arrived, Phil gathered the excess packaging from around him and strolled out of the garage, contriving to arrive at the recycling bin at the exact moment Sam Cooper got out of the small - but surprisingly loud - purple car that lived next door with her.

'Hi, Sam,' he called, waving cheerily and promptly dropping an armful of cardboard.

'Presents?' she asked, indicating the large box Phil was trying to fold with his feet as if that had been his intention all along.

'Oh, just something I picked up off eBay. Not sure it even works,' he added with a shrug.

'Anything I can help you with?'

Phil shoved the excess packaging into the recycling bin, in the vain hope of closing the lid over it. 'I didn't think old computers were really your area?'

'Maybe not,' she agreed, 'but two heads are better than one, so I'm told.'

Despite the fact Phil's suburban semi was now shared only with Charlie - who was out more than she was in, with her current crop of goth friends and their strange nocturnal habits - he had kept his computer hobby in the garage rather than move it into the house.

Sam had never been invited inside before, but she knew this was Phil's man-cave and exercised appropriate respect as she stepped through the narrow section of the side-hinged door.

Inside, it was a shrine to eighties technology; on the walls, several display cabinets were filled with rows of old computer game cassettes, and another filled with similarly old computers.

A workbench ran along the walls at the far end of the garage, complete with counter flap where a door led out into the back garden; in the corner, the ZX81 was trying to exert its will over a stubborn black and white Sanyo.

'Is that it?' Sam said, approaching the tiny plastic case curiously.

'Sure.' Phil followed her inside, leaving the door open behind him.

Sam smiled and glanced back at the classic Mini on her drive; a stripe along the bottom of the door identified it as 'T. REX', a nickname only partly related to its impressive roar. 'Great things come in small packages, eh?'

Phil made a concerted effort to look at something else as Sam bent over the little computer, checking and re-checking all the connections.

'So what do you think?' he said after a few moments of pretending to be otherwise engaged.

Sam stopped twiddling and stepped back to survey the minimalist desktop setup and the box from whence it had come.

'What?' Phil said into her silence.

Sam paused for a moment and then spoke the forbidden phrase:

'Did you read the instructions?'

But Sam was already digging in the box, pulling out the rather hefty BASIC programming guide that was packed with the ZX81.

'Pretty hard, judging by this,' she suggested.

'Be careful with that!' Phil said. 'It's practically mint and boxed!'

'Alright, calm down!' Sam said, trying not to laugh. 'You're right though,' she added. 'It doesn't look like anyone has opened this book, ever.'

'So why start now?' Phil gently tried to remove the book from her grasp. 'Please, Sam. You're still oily.'

Sam looked at her hands - mechanic's hands, holding a pristine book that was probably older than she was. 'Fair point.' As she handed the book over to Phil, a few loose pages fell onto the desk. 'Is that the quick start guide?'

'What?' Phil held the book protectively, discreetly inspecting the manual for oily finger marks and such. 'They hadn't invented those when this was made.'

'Now that's what I call old school,' Sam said, reaching for the papers on the desk. 'I guess it was just called school then though, huh?'

'What is it?' Sam asked, screwing her face up as she peered over Phil's shoulder, as if, somehow, that might make sense of what was written in the paper.

Phil flicked through several of the pages; it was indeed computer paper, pages of it covered in random alphanumerics in faded uniform rows. 'Looks like some sort of hex,' he said eventually.