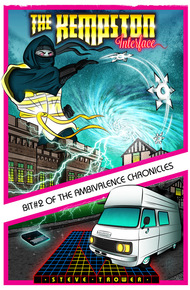 The Ambivalence Chronicles - Bit#2: The Kempston Interface by Steve Trower

For retro computer nerds Phil Grundy and Benito Stetson, a trip to 1982 should be a dream come true. Unfortunately Stetson has already been kidnapped by the Assembly of Newly Uplifted Systems, who are intent on using him to open a portal between worlds real, imaginary and otherwise.

Thankfully, not only do Phil and his friends still have the trusty Dodge Ambivalence, but they also have a newly sentient ZX81 calling itself Dexy, and Gary the Hi-Vis Ninja to help them.

Part time travel story, part comedy, part homage to 80s ninja video games, The Kempston Interface picks up where The Chip Whisperer left off, and gets a lot weirder.

It is a truth universally acknowledged, that a teenage boy in possession of a year's paper round money must be in want of a Spectrum. At least, it is in 1982; and that is why Charlotte closed the van's rear door in a very deliberate and intentionally final sort of way, and slipped off into the car park.

Unfortunately, a 21st Century goth in 1980s Aylesbury is almost a textbook example of conspicuity, so she was forced to summon an inner ninja she had not previously been aware of, skulking between rows of cars, stealthy as a shadow in the dead of night.

'Charlotte!' she hissed, out of habit, not wanting her father to find her lest he draw unnecessary attention.

Taking cover behind something called a Matra Rancho she looked around for him, but could see nothing; hopefully he was causing bother somewhere else and drawing attention away from her so she could finish her little side-quest.

Charlotte turned her attention back to her quarry - two teenage boys in need of a Spectrum - when an unusual flash of colour in the corner of her eye caught her attention. It was only the briefest glimpse, but something definitely out of place; it was either some sort of optical illusion, like one of those 3d images you can only see when you look through it, or it was hiding. Hiding in plain sight, maybe.

'Never mind,' she told herself, leaving the safety of her Rancho to hurry after the paperboys before they wandered out of sight. Seeing them turn, Charlotte dipped between two Minis (Sam would be pleased to see so many of the little blighters out in the wild) and made to head them off before they went out of sight - or worse, got in their Mum's Austin Allegro.

Breaking cover, she hurried through the car park, rounding a Fiat 127 just in time to find herself face to spotty teenage face with the paperboys she was looking for.

'Hi!' she said, as cheerily as her hippy goth image would permit.

The two lads glanced at each other nervously. Charlotte wouldn't have been surprised if a puddle had begun to appear at their feet, such was the terror this creature known as woman held for the early teenage nerd.

'Er, hi?' one of them said, and for some reason carried on walking.

'Wait!' Charlotte fell in step next to the slightly less introverted one. 'I just wanted to make a… business proposition.'

'Stop!' Charlotte held her hand up, very nearly smacking him in the face. 'Don't even think the end of that sentence.'

Charlotte followed them out of the car park and onto an open patch of grass which separated the town centre from the suburban utopia of Aylesbury.

Charlotte turned to get out of sight, but was instead accosted by a large, serious looking man in a suit that had tried its best to fit but ultimately decided some things were just not meant to be.

'Oh not you as well!' she groaned.

'Is this your boyfriend?' he sounded even more terrified now.

'Definitely not!' she said, to the clear relief of everyone but the serious man in the suit. 'What are you doing here, Grell?'

'Stopping you before you do something Mr Wendig might regret.'

Grell grinned. 'Two for one!'

Just then there was another flash of colour, this one much bigger, much closer, and in a blink there stood beside them a figure in black martial arts type clothing, holding a sword in one hand and a throwing star in the other.

'Not today you don't,' this new stranger said in a gruff voice.

'Woah, woah there soldier!' Charlotte said, now distinctly worried about that aforementioned puddle making an appearance. Possibly even at her own feet. 'Go easy with the silverware, huh?'

The man with the silverware turned to face her - although this revealed only his eyes, and Charlotte paused to take in how bizarre it was that this person has chosen to dress from head to foot in costume - in this instance a ninja, complete with scary ass sword that he was hardly ever allowed to take out of the house - and then stick a yellow hi-vis vest over the top of the whole affair.

Charlotte nodded. 'He has been for the next 35 years.'

Without further warning the hi-vis ninja had secreted his sword about his person, and in a blur of yellow and black, took Grell's legs away from under him and had the big man flat on his back and only bothering anyone in his dreams.

But it was too late, and in his excitement to come to his daughter's aid, Phil had found himself nose to nose with a combat ready ninja, a development which so startled him that he immediately fell backwards, cracking his head rather nastily on a shovel he had not previously noticed lying, abandoned, on the ground.

Phil blinked a few times until the crowd of out of focus ninjas combined into a single entity, and then rubbed his eyes again, just to make sure he wasn't seeing things.

Once he was pretty sure he wasn't, he almost asked, but decided against it. If there was a reason a ninja would be wearing a hi-vis vest over his ninja suit he probably didn't need to know it.

He rubbed the back of his head where it had hit the shovel - there was no sign of blood, but he thought a fairly impressive looking bump might be forming there before long.

'I think I'll be ok,' he said, taking the hi-vis ninja's offered hand and getting to his feet.

'Good,' the ninja said. 'Maybe we should pick this up,' he added, picking up the shovel. 'Could do someone a nasty injury lying around under the grass like that.'

The ninja nodded. 'If they were startled maybe, and fell over, for instance,' he said.