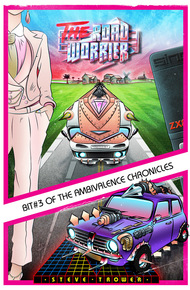 The Ambivalence Chronicles - Bit#3: The Road Worrier by Steve Trower

On the other side of The Kempston Interface, Phil Grundy and his friends find themselves in a world where a terrible apocalypse has left the highways deserted but for a few bands of armed bandits and warriors.

Joined by the enigmatic Bryonetta Bootlesquith, they take the Ambivalence and T-Rex on a road trip like no other, meet Mr Heli, and rescue Sam Cooper from the evil clutches of Viktor Wendig - all on an empty stomach.

If Max Mad had been set on the M4 near Slough instead of the Australian outback, and if Max had been an overgrown 80s kid with a penchant for racing games instead of, well, Mad Max, it might have looked like The Road Worrier.

The third in this comic novella series takes us into a Mad Max-inspired world - with lots of hints of Douglas Adams & retro ZX Spectrum weirdness along the way. – Simon Carless

It is a well-known fact that tanks are not usually allowed out on their own; they have a tendency to blow stuff up or just roll straight over poor Mrs Jackson's Kia when she innocently pulls up at a red light. On motorways they would cause all sorts of trouble by being even slower than a 30 year old Dodge Spacevan, with only slightly better fuel economy. For this reason, vehicles like the Scammell Commander could occasionally be seen hauling tanks up and down the motorways of Britain, presumably to quell the next uprising of the suburban classes.

Rarely, though, was a Scammell Commander seen bearing a retired ambulance and a bright purple Mini Clubman along the M4. Until now.

Inside the Ambivalence, uneasy silence had become the new norm since Bryonetta Bootlesquith went Deus Ex Machina back at the Thunderwall, ushering them through the freshly carved tunnel before collapsing it behind them.

This had given Phil an idea, and he had spent the entire journey so far playing Dexy at Thro' The Wall.

'How did you know where to find us, anyway?' he asked, the oddly mesmeric experience of bouncing a wobbling square up and down a black and white TV screen beginning to wear after the 37th round.

'For us?' Charlotte asked.

Bryonetta nodded. 'On this occasion, yes.'

'Because we received this.'

Phil took the sheet of computer paper she was holding out, and read the message printed in the familiar dot matrix style: 'We have Miss Cooper. We want your computer. Await your proposal.'

'Who's it from?' Charlotte asked.

'I thought that Wendig had a copy of the Hex,' Nectarine said. 'Isn't that how we ended up in this mess?'

'Maybe he wants Dexy for something else?' Charlotte suggested.

AND WHO COULD BLAME HIM? Dexy chipped in.

'Well he sure plays a mean Thro' the Wall,' Phil admitted.

'But we can't give them complete control over the Entelechus,' Nectarine pointed out.

'What about Sam?' Charlotte said.

'We'll think of something,' Phil said. 'At least now we know where she'll be.'

I DO A PRETTY GOOD BREAKOUT TOO.

'Well, once it was a supply and maintenance depot for the Royal Air Force,' Bryonetta explained, 'until somebody drove a motorway through it and decided the officers mess would make a welcome break.'

IT IS A REDUNDANT SERVICE STATION ON A DISUSED MOTORWAY.

'Appearances can be deceiving,' Bryonetta said.

YOU ARE TELLING ME?

Unlike what was left of the M4, the main car park appeared to contain actual cars, so the large and somewhat unwieldy transporter passed it by and pulled up in the otherwise empty HGV parking beyond the main building.

Following Bryonetta's instructions, T. Rex and the Ambivalence were offloaded, and with she and Doc Nectarine in the Mini, and Phil and Charlotte in the Ambivalence, they drove slowly around to the main entrance.

Trying to look less perturbed than he felt, Phil pulled up beside the Mini, parking as close to the entrance as he could without trespassing on the disabled spaces (even in the post-apocalyptic Berkshire of a parallel dimension, some things were simply not acceptable). What cars were already here were arranged around the perimeter of the car park in what now seemed a somewhat confrontational manner. They also appeared to be armour-plated, almost to the point of being tanks; not an easy look to pull off in a Nissan Figaro, it turns out.

As Phil stepped down from the Ambivalence, a group of chain-wielding punks was already beginning to gather around the main entrance.

Thankfully Charlotte - dark of clothing and pale of face - could have almost fitted in with this crowd; a fact which possibly saved Phil from an instant pummelling.

'I'm just here for the Ginsters,' Phil explained as they approached the unhappy mob that stood between him and whatever retail establishments might still exist inside.

The punks laughed, raucously, as if that was the single most outrageously funny idea they'd heard in weeks.

A man with long hair and a short beard, dressed like some kind of Middle Earth warrior, stepped forward, and the group fell silent behind him. He appeared to speak for the group as a whole. 'One does not simply buy pork pies from Waitrose,' he explained.

'I think this is Memebury Services,' Phil replied, just as quietly.