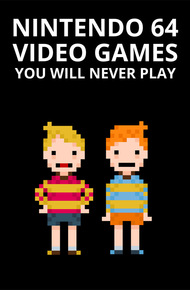 Nintendo 64 Games You Will Never Play by Unseen64

In its never-ending quest to document the world's rarest—and in many instances, weirdest—video games, Unseen64 has entered fond and expensive terrain in Nintendo 64 Games You've Never Played. Collectors and nostalgic players alike will love absorbing all the information, artwork, and details from Nintendo's groundbreaking 64-bit machine. – David L. Craddock

The original Playstation's success within the marketplace can be attributed - although not exclusively - to a wealth of new franchises whose target audiences were young adults. Quite possibly the most high profile franchise was Eidos' Tomb Raider. Series' protagonist and heroine Lara Croft was - and we don't use this term lightly - a cultural phenomenon back in the mid and late '90s.

Previous to the release of the first title in 1996, there weren't many female leads in video games, and certainly not many promoted and sexualized as much as she was. This, along with the quality of gameplay and 3D graphic, captured the imagination of players around the world - an unprecedented media frenzy and a slew of sequels and similar titles that followed.

The success of Tomb Raider could have been one of the inspirations for Riqa, a female-lead action adventure planned for the Nintendo 64, and announced at the E3 gaming expo in 1999. Rumors about the title were published by IGN as early as November 1998, when they reported the registration of the Riqa domain name: "Willy, the valet parker over at Nintendo of America told me that he accidentally walked into a secret meeting last Friday and saw some stuff he wasn't supposed to see. Peter Main, Howard Lincoln, Jim Merrick, Perin Kaplan - everyone was there. And then there was RIQA. Well, not really. On a board behind the Big N crew, some busy soul had scribbled countless new names, from top to bottom: RIQA, Siras, E-Siras... That's when Jim Merrick kicked Willy out of the room. Don't ask me what those titles are, but they're apparently important enough for Nintendo to register websites for... Hmmmm…"

In development by Bits Studios since 1997 and due to be published by Nintendo themselves, Riqa was an ambitious project that blend together third-person exploration, puzzles, RPG and shooting gameplay. The footage shown at E3 was very impressive for its time and N64 owners were pumped to see a more "mature" action game for their console. Besides the main character named Riqa, two more playable characters (male and female) were also planned for the final game. Unfortunately, details about the project were still scarce at the time: gaming magazines and websites quickly related the game's main female protagonist with Tomb Raider's heroine Lara Croft, but the comparison was quite unfair, as RiQa was planned to be a much more complex game.

Bits Studios and Nintendo wanted to create a huge action RPG for a new generation of gamers used to fast-pace shooting combat and third person exploration. Under its "Tomb Raider" look, Riqa had gameplay mechanics inspired by classic action RPGs, as experience stats and a LV-UP system, health and magic points, elemental alignments, status effects, cities to explore, NPCs to talk to, a 3D earth used as a world-map, to move across different places on the globe and a series of equipments, weapons, armors and other items.

With such a high-profile project, Nintendo asked Bits Studios to predispone the game to be compatible with the planned 64DD add-on, so that new expansions could have been released in the future, just like for Zelda: Ocarina of Time. In the few videos available, Riqa's seen using an impressive arsenal: a grenade launchers, 3-ways laser guns and sniper rifles, against a largely human and robotic army - suggesting a plot and setting within some sort of mechanised dystopia.

Other than shooting in third person view, players would also have been able to aim in first person, to improve their precision. Riqa quickly moves around the levels and seems pretty adept at dodging enemy fire, a skill the player would have been allowed to thanks to the accurate movement offered by the N64's analogue stick.

We can see glimpses of puzzles, with computers and shields to deactivate in the correct order and a huge brightly coloured game-board style set up. We can also see a few cities, bars and buildings with friendly non-playable characters available to talk, to sell items and to give new quests to the players.

While the world of Riqa was divided into different, not directly connected areas (cities, warehouses, labs, enemy bases, caverns, deserts, japanese temples, etc.), thanks to the map we could have been able to freely choose where to move among dozens of different locations from all around the world, depending on the current mission.

The ambitious plans for Riqa unfortunately remained obscure to the gaming press at the time, and with no updates about the game, early rumors about its cancellation spread online late in 1999. Against all odds, in January 2000 IGN reported that the game was still on track:

"At last year's Electronics Entertainment Expo in Los Angeles, Nintendo previewed brief snippets of a previously unknown Nintendo 64 action-adventure called RIQA. The 3D title, which looked like a cross between Tomb Raider and Mission: Impossible, was not playable and extremely early in development, but it showed promise all the same. Since that time, Nintendo has not uttered a single word on the game, which has led many in the industry to question its status. The good news is that it's still very alive. We spoke with UK based developer Bits Studios about the project today and were reassured that while Nintendo is reluctant to release any new information on the game, everything is going smoothly behind the scenes."

As we know today, that was not the case: being shown late into the Nintendo 64 lifecycle and not even nearly completed , Riqa was destined for cancellation. With the new generation of consoles (Playstation 2, Gamecube, Xbox) just around the corner, publishing a new title for an old-generation console with a dying userbase was not a good idea. Despite an enthusiastic reaction to the footage by Nintendo-centric and multi format games magazines at the time, Riqa was cancelled along with Die Hard 64 and another N64 game by Bits Studios known as Thieves World.

Unfortunately, Riqa was an ambitious project slowed down by the limits of the console and by the game's engine iteration cycle, with levels made in Max that had to wait for long manufacturing times before to get them on console. Nintendo and Bits Studios decided that it would have been difficult to successfully complete the Riqa project in time to be profitable.

When Riqa was cancelled early in 2000, for a few months Thieves World became the new focus for Bits Studios, thanks to its new easy-to-use engine created by Nathanael Presson and Frederic Villain ,that permitted to easily develop the game in a short time. Their hopes was to be able to release Thieves World before the final death of the Nintendo 64.

Unfortunately the development was still not fast enough: Thieves World was moved to "next gen consoles" becoming a tie-in game under the "Nikita" IP - based on the TV show that was on around that time, and it was finally released in 2003 as Rogue Ops, published by Kemco on GameCube, PS2 and Xbox. Playable character Nikki Connors is described as an ex-green beret, in what may be a wry meta-reference to Riqa, since this was the headgear favoured by that game's protagonist. Sadly, Rogue Ops didn't capture the hearts of gamers as it was poorly received by critics and failed to sell particularly well.

Bits Studios would eventually cease operations in 2008, leaving behind a wealth of licensed games and a good number of cancelled projects. It wouldn't be long before Nintendo released another Nintendo 64 game with a female lead, in 2000's Perfect Dark, developed by second party gaming legends Rare. It's interesting to notice that another lost N64 game, Mission Impossible 2 by Ocean Software / Infogrames, was also switched into a Nikita tie-in for "128-bit consoles", before being finally canned.

Riqa looked like an interesting action adventure that could have become another must-have for Nintendo 64 owners. We can only speculate about the commercial and cultural effect of Riqa at the time, which joins a number of other high profile proposed N64 experiences that never saw the light of day.