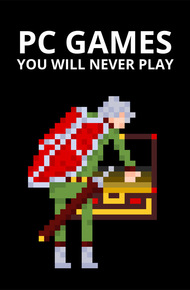 PC Games You Will Never Play by Unseen64

The Unseen64 crew excel themselves with this research around PC games that never made it out, including a Jade Empire sequel, Myst IV, and a bunch of other rare titles. – Simon Carless

To describe the PC gaming market is one of the most difficult tasks one could try to achieve. With its long history and multi-layered series of topics, from hardware evolution to digital distribution, the new wave of indie developers and cheap game bundles, in this book we can only give a light recap about what it means to play games on a personal computer. Once upon a time, computers were huge and expensive mainframes that only scientists, universities, governments or big industries were able to buy and manage.

Luckily in the '80s computers became much smaller and cheaper, consumers started buying them for their homes to keep working on files while not at the office, and for personal use or to help their children learn something useful for their future. And behind word processing and learning software, soon computer games took their place in entertainment as another way of using those grey boxes just for fun. Hardware such as the Atari 800 and ST, Apple II, Commodore VIC-20 and 64, IBM PC, FM-7 and Towns, ZX Spectrum, MSX, NEC PC-88, C-98, Sharp X1, X68000 and Amstrad CPC were just a few of the popular brands owned by people from all around the world, in the early days of personal computers.

In 1981 Microsoft released DOS as the operating system for IBM PCs and it soon became the standard interface for working and playing on a computer. To run a game in DOS was still not an easy task, as you had to type different commands to config and start a program, something that was not suited for younger kids. Computers were not intuitive to use and most games were played with keyboards (and sometimes with a mouse), characteristics that helped to shape the PC gaming market towards teens and adults.

You had to be able to read, write, solve cryptic puzzles and organize complex strategies to enjoy the best games on PCs. After the American videogame crash in 1983, Nintendo were able to resurrect the console market by promoting their NES as a toy for kids, and even if adults played Super Mario Bros, Zelda and Duck Hunt too, the computer remained a more "serious" place for games.

You could easily put your DuckTales cartridge in a NES, press start and have fun for just a few minutes, but to enjoy something like SimCity you had to know how to run it on a PC and invest hours to understand how to best manage an urban simulation. In the '90s the computer gaming market had its own set of characteristic and classic genres that cemented PCs as the ideal platform for simulations, point and click adventures, strategy titles and first person shooters.

Doom also showed that a small indie studio could create a major hit: computers were (and still are) the main platform to develop games even without big budgets or support from a famous publisher. While to create games for consoles requires specific development kits, permits or contracts with the hardware manufacturers, computers are a free market where everyone with a great idea, time and talent can develop something good.

Publishing games online in digital form became a new way to sell products without the need of traditional shops and distributors, sometimes by letting people to try the first few levels of a game for free and then shipping them the complete version by post (with companies like Apogee Software making lots of money following this system). However, it was still difficult to run games on a PC through DOS or similar operating systems, but in 1995 Microsoft released Windows 95: the life of users and developers became much easier.

While the original Playstation, the Sega Saturn and Nintendo 64 allowed console gamers to play in new 3D worlds, with the arrival of advanced graphic processing units computers were also able to easily produce 3D games better than any console at the time. Titles like Quake (1996), Tomb Raider (1996), Carmageddon (1997), Half Life (1998) and Unreal (1998) made gamers want to buy expensive hardware to maximize graphics and have good frame rate.

Is the PC market only a copy of what is released on consoles? No, that's far from the truth. PC is still the main platform for indie developers that can create original and experimental games, making them available to download online to a huge number of users… after all, who does not have a computer at home? One of the most successful videogames ever was initially conceived as a small indie project by a swedish programmer: Minecraft, released in December 2009 and now available on all consoles, smartphones and tablets.

There are many development tools available on PC, easy to learn and cheap or even free to use. As it happened in the early days of personal computers, teens are learning how to make games and along with experienced developers there are more and more titles released every day on PC. Of course, most of them will never became popular and only a few will sell enough to permit their creators to make videogames their primary job, but it's easy to understand how today everyone can find something new and interesting to play on PC.

Thanks to Steam, the new wave of indie devs found a viable platform to sell their creations and users are more inclined to buy something that will be listed in their Steam library. Digital games have found their right value, with Steam sales and indie bundles letting people own something only when the price is as cheap as they are willing to pay for. By comparison, traditional selling games through physical shops at full price sounds like a scene from a long lost era.

PC games sales are higher than ever and while we don't know how the market will be in the next decade, we can assume that PC will keep its lead for core gamers. In 2015 the number of digital games released on Steam doubled compared to 2014, with about 3.500 new digital titles. In the same year there were less than 1.000 retail and digital games published on PS4 and Xbox One (source: EEDAR Insights @ GDC16).

With PC gamers expecting to pay less for games, with huge backlogs, free to play games and a wide selection of new titles to choose from, it's easy to see how developers will have to create original, high quality or offbeat products that resonate with the right public, to be able to stand out and sell enough. Since the early '80s, developing software for PC was simple enough for individuals and big studios, if you also keep in mind that most game making tools are used through PCs, it's easy to see how computers have the highest number of canceled projects that were once in development or just pitched.

It would probably be impossible to archive all the unseen PC games that were once conceived (how many unreleased RPG Maker titles are forgotten away in old hard disks?) but at least we'd like to remember some of the most interesting ones, planned by talented studios from all around the world. In the following pages we'll see many canceled ambitious projects that could have become new PC classics, if not lost in the huge limbo of failed videogames.