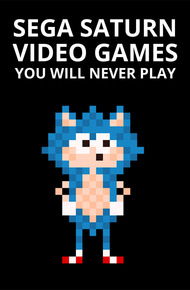 Sega Saturn Games You Will Never Play by Unseen64

When gamers say "Sega," they're probably talking about the Sega Genesis or Sega Dreamcast, the Sonic creator's final console. The Saturn is an oft-overlooked platform, and Unseen64 does a fantastic job showing why that shouldn't be the case in Sega Saturn Games You've Never Played, which reveals some of the most fascinating titles for Sega's least-known console. – David L. Craddock

Shenmue was an overly ambitious game, with the first chapter released for the Sega Dreamcast in 1999 in Japan. Following Ryu, whose father is killed by the main antagonist Lan Di, players were able to explore a characteristic Japanese suburban town in the mid '80s, talking with people, fighting against dozens of enemies in real time, investigating and finding clues, racing with a forklift, playing old games at the local arcade and buying capsule toys to collect classic Sega character models.

At the time Shenmue was a major step forward for cinematic sandbox games on consoles, giving players a detailed world to look at, hours and hours of voiceover dialogues, interactive cutscenes, NPCs that followed their daily routines and many different side activities to do. While the two released chapters of Shenmue were not as successful as Sega wanted them to be - and after having spent millions of dollars for their development, the game still received much praise from Dreamcast owners. However, the project is not what Yu Suzuki originally had in mind.

After designing many popular arcade games (Hang-On, Space Harrier, Out Run, After Burner, Virtua Fighter) with an average playtime of 3 minutes, Suzuki wanted to create a console title that could have kept players entertained for dozens of hours. In the early '90s he planned to create a huge RPG, that could have evolved the genre thanks to the new 3D technology that he already used in Virtua Fighter. By looking at 1980s and 1990s Japanese PC adventure games and RPGs (Mystery House, Wizardry, Ultima, Time Zone), Suzuki noticed many issues that limited his empathy with their stories, characters and worlds.

In 1995 he conceived and developed an early prototype for a new type of role playing game on Sega Saturn, titled "The Old Man and the Peach Tree". By using a powerful 3D engine, the AM2 team was able to create a richer environment, with a full town to explore, with roads, trees, human and animal NPCs. The prototype was set in the 1950s in Luoyang, former capital of China. You would play as a young character named Taro who is searching for a Kung Fu master named Ryu.

In one of the scenes described by Yu Suzuki, the player would have to find a peach to give to an old man, in order to get some help in seeking master Ryu. By the end of the prototype, Taro would find the old man throwing stones across a lake, with each stone hitting a fish or two. The children are cheering around him and by this point Taro knew this old man was master Ryu. This is the kind of feeling that Yu Suzuki wanted to evoke in his RPG, taking inspiration from Chinese folklore, martial arts and old kung-fu movies.

Starting from the early prototype demo in 1996 the AM2 team began work on a full action RPG for the Saturn: when talking about the backstory, characters and tech to use in the game, they decided to use their Virtua Fighter series as the setting for the game. Their ambitious adventure became Virtua Fighter RPG, focusing on the character of Akira and his growth from a young student to a skilled fighter.

This game would use an enhanced Virtua Fighter engine optimized for the Saturn: they would have been able to reuse some of the models and animations from their fighting game, making it easier to create a fun and responsive gameplay during combat. The plan was to create a huge, open world 3D RPG, with voiced dialogue and fights with multiple enemies instead of the one-to-one battles seen in Virtua fighter.

The initial plot followed an outline similar to the story later seen in Shenmue, as for example the protagonist's father dying at the beginning of the game, and would have probably featured other characters from the VF series as Lau Chan. Eleven chapters were conceived for Virtua Fighter RPG: Akira's Story and concept arts were created to show the main event planned for each chapter. The team used these artworks as a way to keep track of what they wanted to achieve. These concepts were shown by Suzuki at GDC 2014 during his Shenmue post-mortem conference and reveal a much different and larger plot from the one we tasted in the two released chapters of Shenmue on the Dreamcast.

Many events and trials were planned to be overcame by Akira before meeting with Shenhua Ling in the mountains of Guilin, during the fifth chapter of Virtua Fighter RPG on the Saturn. On the Dreamcast, Ryo already meets with Shenhua near the end of Shenmue: Chapter 2. Reading a few old interviews and previews, it seems that at some point 16 chapters were planned in total, of which the 5 new ones would have been used to play parts of the story during long travels on boats and trains that Akira would have taken to move across China. In Shenmue, the boat trip undertook by Ryo to reach Hong Kong is not playable, and in Shenmue 2 we start the game just after arriving at our destination in Hong Kong (a comic with a short scene from the cut boat chapter was unlockcable in the Xbox version of Shenmue 2).

Unfortunately, it seems that Virtua Fighter RPG was too ambitious for the Saturn: after creating some playable portions of the game, in 1997 Suzuki switched development to Sega's next gen console. While the final Dreamcast hardware was not available yet, a more powerful console would allow to AM2 to achieve the cinematic quality and 3D world originally imagined for the game. Virtua Fighter RPG was renamed with the temporary title of Project Berkley.

In November 1998, Virtua Fighter 3tb was released as a launch title for the Dreamcast along with a GD-ROM disc with the first trailer of Project Berkley. In this footage the main protagonist still looks very similar to Akira from Virtua Fighter, and he would continue to look like this through development until at some point he was added a brown jacket.

The game was then labeled as "FREE" instead than using the classic RPG label, an acronym that means "Full Reactive Eyes Entertainment"; a way to create a new genre for the project. In 2001, Shenmue 2 was published for the Dreamcast and the following year for the newly released Xbox. Upon completing the game, players would unlock a video of the Saturn version of Shenmue, when it was still Virtua Fighter RPG. This was the first look that people outside of Sega had at one of the most ambitious games ever planned for 32 bit consoles.

Looking back at what happened with Shenmue on the Dreamcast, we can probably say that the project was still too ambitious for the 128 bit console: Yu Suzuki overestimated the resources needed to create such a huge, open world RPG in 11 long chapters. In 2015, 14 years after the initial release of the second chapter of Shenmue, the third one was officially announced by Yu Suzuki at Sony's E3 conference, with a crowdfunding campaign on Kickstarter. The game is expected to be released in December 2017: we can only wait and see what the team will be able to achieve with today's technology and standards.